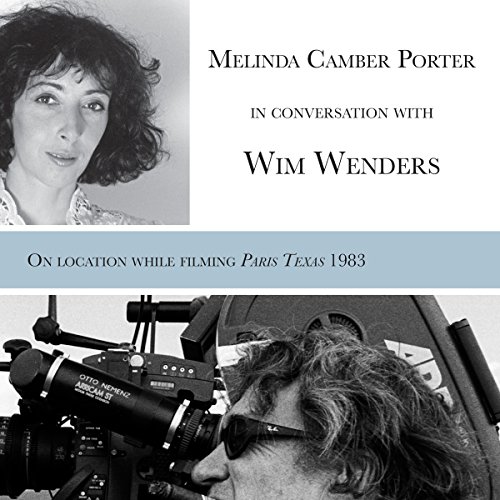 The conversation between Wim Wenders and Melinda Camber Porter (1953-2008), took place on location, in December 1983, while Mr. Wenders was shooting his first American film, Paris, Texas. America was a place of European immigrants, German immigrants, and a vast land stretching to California. Men and women were becoming disillusioned and seeking "that something," just out of reach.

Melinda Camber Porter asked, "When you say men have certain expectations of women, what exactly do you mean?" Wim Wenders explains, "We still have to find out what we mean by that, because 'the character' hasn't really understood that yet [in shooting the film, Paris, Texas]. The character is getting ready to confront the issue. I do not work so a film is laid out and people can spell it out. I work much more on intuition ...Sometimes filmmaking is very much based on very subconscious choices or intuitions."

Paris, Texas, directed by Wim Wenders and written by Sam Shepard, with adaptation by L.M. Kit Carson, and starring Harry Dean Stanton, Nastassja Kinski, and Hunter Carson, among others. Melinda Camber Porter passed away from ovarian cancer in 2008 and left behind a significant body of work in art, journalism, and literature. With her background as a journalist for The Times of London, her interviews had a unique way of getting to the heart of the creative process used by the many widely acclaimed cultural figures, filmmakers, and writers, whom she spoke with.