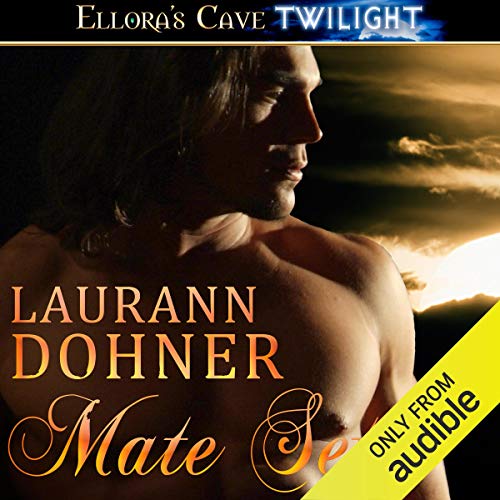 Grady is a half breed whose human mother abandoned him to his werewolf father, so he knows human women just aren't safe to fall in love with. The wolf within him wants Mika as his mate, but Grady will not give in. Never. Ever. He's willing to fight his emotions and his beast, no matter how much sexy Mika tempts him.

But neither of them expected her Uncle Omar to assign Grady to protect her from other males - 24/7, in her home, sleeping just down the hall. Mika decides to make the best of her vacation and keep the hot wolf in her bed. Grady can't resist the scorching sex, but he is determined to resist the bond.

First, I will admit there really wasn't a plot outside of the relationship between the hero & heroine. The story was focused on them, and them alone. Mika’s upbringing into a world of werewolf shifters and humans hasn’t exactly made her qualified to stay out of trouble. Although human herself, Mika’s uncle is a werewolf shifter and has taught her the ways of his pack… well almost all of them. Uncle Omar knowingly withheld vital information regarding mating season, thinking that this will keep Mika ‘innocent’ from the highly sexual natures of werewolf shifters. Her yearly vacation to visit with Uncle Omar couldn’t have come at a worse time. Now with Grady, his upbringing wasn’t exactly conventional either. His mother is a human who abandoned him to his father when she found out he could shift. Dealing with his abandonment issues has never been a problem since he’s in denial. Dealing with Mika when he’s assigned protection duties by her uncle, could prove to be disastrous. The two main characters are both very passionate and stubborn which leads to a physically explosive relationship from their first meeting. The emotional frustration kicks in when the characters start actually feeling something for one another but for Grady abandonment issues by a human woman is the drawback. Recommended for those seeking a highly passionate, highly sexual story that will pull you in all directions. Note to listener: if you’re looking for a new creative way to enjoy chocolate syrup, there’s a fantastic ‘recipe’ in this book.

This was awesome after like the first 2 chapters... I was a bit confused then I realize by chapter 2 what was going on...and the story really takes off from there...

I loved the smexing... hotty hot!! Then Grady was an awesome confused alpha wolf... but Mika was awesome... I loved the way she taunted Grady...but I did want to slap her when she ran away from him... (but finding a naked werewolf chick in your newly mated shower will do that to a gyrl)!

Perfect Ending too... (wink) foreshadow to book 2... Can't wait to get to Anton's book!

Great job Dohner... please write more of the Harris Clan... I want a book from all 5 brothers...

Nice Credit, sale or buy... book is not that expensive...

Narration was awesome... VonCloudts is a great narrator... A new favorite...

Wow this was super hot, I loved every minute of it. The book's summary wasn't intriguing enough for me to purchase it, but, I've enjoyed Dohner's other series so I figured I could risk it. I listened in one sitting--I was THAT hooked. If you want a story with a ton of depth, this isn't the one for you, but, if you're open to a bit of fantasy, seriously hot shifter sex, and definitely a lot of sarcasm, innuendo and humor, don't even read the rest of my review--'add to cart' immediately!

THE PLOT WAS HOT HOT HOT

Adopted Mira (the human heroine) get's caught in the middle of the Were mating season while visiting her Werewolf Uncle who appoints a bodyguard to watch over her until the 2 week 'frenzy' is over.

In prowls handsome Grady, a half breed Werewolf, who has trust issues with humans as he was abandoned by his human Mother so is seeking a Pureblood female to bond with. Trouble starts when he is forced to 'mark' Mira against his will and that's when the passion and non-stop sex really heats up. The problem is Mira's falling hard for him but Grady's human side is fighting a bond but his Wolf side is howling yes yes yes so sex is fine but he's in denial about his true feelings for Mira.

Mira came across as spoilt at times and did some dumb things and there wasn't really a plot other than mating mating and, yes you guessed it, more mating but despite this I really enjoyed all the emotional tension an turmoil as Grady finally had to decide what to do….. before time runs out.

Worth a credit? Well hello, hot hot hot Werewolf action, errr that would be a hell YEAH and I'm ready for Book 2..

This is my first time listening to this author, I find her writing close to the edge, but I like that. Mika was a little annoying at times but the story was good enough to over look her. A lot of new audio books are being narrated by very young voices, not so with this one. J.C. VonCloudts performance is excellent and I would look for more of her work.

Now I Love the Human Unknown and especially Werewolf's... Grady's sexual lust of his beast so Hot Hot Hot.... This book fulfilled all my Werewolf needs in every way.

Mika is on an evening trip to find some chocolate - problem is she doesn't realize it's mating season in the land of sifters where she is spending a couple of weeks visiting family. Poor girl finds herself confronted, beaten and almost raped by 4 very nasty males wanting to have their way with her. Grady hears her screams and takes on the 4 males in defense of her. With a bit of assistance to Grady from Mika, she manages to escape - she thinks. As she is making her way home, Grady finds her and calls in the debt owed him. Little does Grady know Mika's uncle is one of his pack leaders and Grady will need to protect her until the mating heat is over. Unfortunately, Grady also suffers the mating heat... and so the Sex Filled fun begins!

I love when an alpha fights his feelings, but what I really love is how Ms. Laurann makes her alpha males be soooo damn sexy, powerful and have a sweetheart.

Grady is a sweetheart, he tries to do what he thinks is right but sometimes they just get it all messed up. Mika knows how and what he is, and that he will never willingly pick her to be his mate.

And Grady doesn’t want a human but his feelings and his natural instinct to be with Mika is clouding his brain. I love the back and forth these characters have. It is witty and snarky but fun and enjoyable to listen to.

When they said this was erotica they were not lying. It is smokin' hot people. Also, the narrator perfect choice loved, loved.

Potential but not sure at this point

I had high hopes for this book but I think it fell a little flat for me. I am not exactly sure why but there was something missing. There was chemistry between Mika and Grady but I feel like their characters were not developed enough. I agree with some other reviews that Grady was not Alpha enough for me. Mika had potential to be a sarcastic, bitchy character but again it was not consistent enough. I enjoy female leads that are sarcastic so I was hoping it was going to be a strong theme throughout the book. I have to say that GC VonCloudts did a great job at trying to liven up the narration. I have no complaints on that part. I even feel the sex scenes were just mahhh. They were not terrible but not really great. I would hope that the next book picks up and the story lines and gets better. I can definitely think of better books if you like paranormal. Jeaniene Frost has a great series. I am not going to say I won't listen to more as I always like to give authors a chance but I and not positive at this point.

Non stop fighting and bickering between them

This was not a book to be tossed aside some lightly....it must be thrown with great force. The entire book was like like a paid infomercial for couples therapy. The h whined the entire time about poor treatment and wanting to be loved. The H spent the entire book treating the h like crap while demanding to be serviced and the h falling in line and doing it! Then her meager attempt at passive aggressive rebellion by giving him the stereotypical cold shoulder has him offering up a weak half assed apology which she accepts only to have him go off on her, destroy her house like an out of control overgrown toddler because he becomes enraged by "accidentally" mating her mid sex. Then his family drags her back when she runs from him in fear, shaking a finger in her face, frowning at her and saying "bad girl! bad human!". At the end of all this the H comes to her and uses his damaged childhood as justification for his crappie behavior. I will never understand why men think this makes it ok to treat a woman like dirt in the present because some woman in their past treated THEM like dirt to begin with. Then comes the magic phrase from the H that makes everything he's done to her up to then go away, all the hurt, the insults, the cheating, the mental and emotional abuse, the lying and controlling manipulative behavior just vanish....he tells her he LOVES her. Naturally the h just forgives everything immediately to say "I love you too. " and they live happily ever after. UGH! Someone give me a time machine please so I can go back and stop myself from wasting my time and credit on this book. 🥵

Well it seems that my very favorite narrator is now using the pseudonym GC VanCloudts. I believe her original name is Therese Plummer and she can narrate a newspaper and make it sound like the most fascinating thing you've heard. Yes, she's that good.

The story was just ok for me. It was very hot and heavy but I felt like the story was mostly about sex. The paranormal world wasn't developed and I kept wondering what our main couple had in common besides strong libidos. That said the story did spark my curiosity and I will be listening to other books in this series as long as they are narrated by this same amazing narrator.