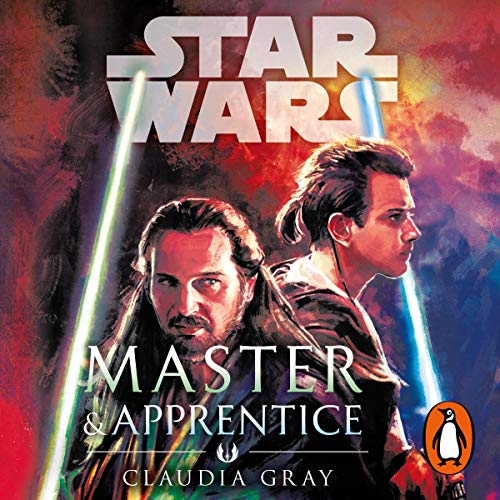 An unexpected offer threatens the bond between Qui-Gon Jinn and Obi-Wan Kenobi as the two Jedi navigate a dangerous new planet and an uncertain future.

A Jedi must be a fearless warrior, a guardian of justice, and a scholar in the ways of the Force. But perhaps a Jedi’s most essential duty is to pass on what they have learned. Master Yoda trained Dooku; Dooku trained Qui-Gon Jinn; and now Qui-Gon has a Padawan of his own. But while Qui-Gon has faced all manner of threats and danger as a Jedi, nothing has ever scared him like the thought of failing his apprentice.

Obi-Wan Kenobi has deep respect for his Master but struggles to understand him. Why must Qui-Gon so often disregard the laws that bind the Jedi? Why is Qui-Gon drawn to ancient Jedi prophecies instead of more practical concerns? And why wasn’t Obi-Wan told that Qui-Gon is considering an invitation to join the Jedi Council - knowing it would mean the end of their partnership? The simple answer scares him: Obi-Wan has failed his Master.

When Jedi Rael Aveross, another former student of Dooku, requests their assistance with a political dispute, Jinn and Kenobi travel to the Royal Court of Pijal for what may be their final mission together. What should be a simple assignment quickly becomes clouded by deceit and by visions of violent disaster that take hold in Qui-Gon’s mind. As Qui-Gon’s faith in prophecy grows, Obi-Wan’s faith in him is tested - just as a threat surfaces which will demand that Master and Apprentice come together as never before, or be divided forever.

No where near the quality of the Darth Bane trilogy and Plagueis. Just an okay book without too much mystery.

Claudia Gray has carved her mark into the Star Wars Expanded Universe, both with the previous now ‘Legacy’ Universe that has been put aside by Disney, in favour of the new timeline and movies, but she has continued to move along with the times (THANKFULLY!!!) into the new Universe as well.
Gray has already taken the dive into the new timeline with the very successful and positively reviewed ‘Bloodlines’ that was a literary prequel to ‘The Force Awakens’.
In this book, she takes us back to well before any of the movies, back when Kenobi was just a teenager and still a Padawan of Qui-Gon Jinn. Whilst at first this might seem an odd choice, once you get into the story, Star Wars fans will find it an utterly fascinating read, full of all sorts of insightful, interesting and riveting information.
Gray takes us back to a time when Qui-Gon had just started up his obsession with the old texts and prophecies again, and due to several events that had occurred in his past (that we learn about in the story due to tales told by Dooku as well as another main character, a rather unusual Jedi, Rael Averross), and events that are occurring on their current mission, again with this Rael Averross, we get to learn a lot about the old prophecies.
And it is in this book, that we finally get to read (hear), the full prophecy that relates to Anakin, something that has only been previously hinted at, or given vague reference to. This is a major bonus for any keen Star Wars Fan, as are several of the other prophecies as they do actually tie in (some of them) with bits of the Clone Wars series, and some sites have even mentioned that aspects of the prophecies mentioned could relate to the last series ‘Rebels’ and Ezra.
The main story relates to Qui-Gon and Obi-wan being tasked with heading to a planet to assist Jedi Averross in the signing of a treaty for a new hyperspace route, as Averross has been acting as Regent for the Planet until the young girl, whose parents where killed, comes of age to take her place as Queen. Averross was chosen for the role after he lost his own Padawan, vowing never to take another, and this was seen as an opportunity for him to use his valuable skills to raise someone in dire need of protection and counsel.
However, all is not as it seems, as there is a complex Political scenario on the planet, with a major Mega-Corporation being heavily involved in the operation of industry on the planet, but also being involved in what amounts to legal slavery through a loop hole in laws. Whilst Qui-Gon wants to stop the contract, to do so would mean the end of the Hyperspace laneway, and helping billions upon billions of lives, damaging trade, other whole planets going to financial ruin through the lack of trade/financial support.
What ensues is a very intricate and multifaceted Political scenario, that not only has ties to the future of the Galaxy and billions of lives, but it also affects directly the individuals involved that are signing the contract, making the entire scenario incredibly interesting to say the least.
This is not just another Star War story of a Political tale playing out on Planet, this is a tale that potentially affects Billions, but it is also a tale that has significant impact on the prophecies of the Jedi Order, on Qui-Gon Jinn and his Legacy within the Force, and even more importantly, it defines Kenobi’s Legacy within the Force.
For Star Wars fans, this is another must read by Gray, who continues to provide epic tales in the Star Wars Universe that are not only captivating, but true masterpieces.
Jonathon Davis does a wonderful job with the Narration, providing a clear and concise narration, a wide range of voices of both genders and aliens (which is not so easy to do). Not only does he provide a wonderful Narration of the story, but Davis as with most of those that Narrate Star Wars stories, really lives the story, allowing us to be with the characters as they go through the story, feeling what they feel, the highs and lows. Davis really brings the story to life, giving it some extra depth, not just narrating it for us. This is an excellent piece of Narration, and it is actually better to listen to this in audiobook form than it is to read it. Well worth getting the Audiobook.

This was as good as Asohka’s story... no, it was better.

Such a satisfaction to finally get to see Qui-gon again. It felt like reuniting with an old friend after twenty years appart.

Great story and storytelling, very good use of flash backs, a lot of action and emotion.

And, as usual, an immersive interpretation by Mr Davis!!!

A Star Wars story worthy of its roots

This was a truly compelling and fast pasted story every Star Wars fan should know.