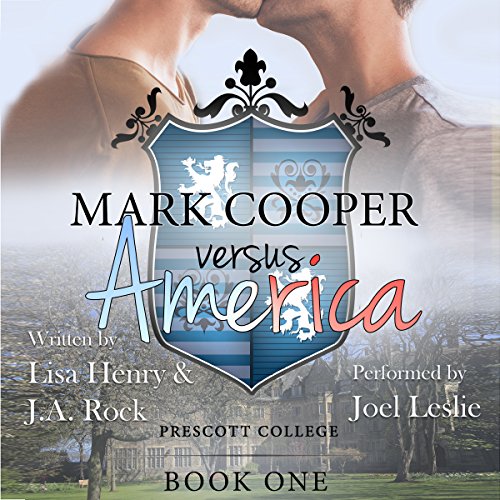 Mark Cooper is angry, homesick, and about to take his stepdad's dubious advice and rush Prescott College's biggest party fraternity, Alpha Delta Phi. Greek life is as foreign to Aussie transplant Mark as Pennsylvania's snowstorms and bear sightings. So, when the fraternity extends Mark a bid, Mark vows to get himself kicked out by the end of pledge period. But then he's drawn into Alpha Delt's feud with a neighboring fraternity.

Studious Deacon Holt is disappointed to learn Mark's pledging Alpha Delt, his fraternity Phi Sigma Kappa's sworn enemy. Mark is too beautiful for Deacon to pass up an invitation for sex, but beyond sex, Deacon's not sure. He wants a relationship, but a difficult family situation prevents him from pursuing anything beyond his studies.

Mark and Deacon's affair heats up as the war between their fraternities escalates. They explore kinks they didn't know they had while keeping their liaison a secret from their brothers. But what Romeo and Juliet didn't teach these star-crossed lovers is how to move beyond sex and into a place where they share more than a bed. That's something they'll have to figure out on their own - if the friction between their houses, and between Mark and America, doesn't tear them apart.

I LOVED this book. I laughed out loud within seconds of listening to the promo so you know it's going to be funny. It's rare I pick up a romance novel and find myself enjoying the story just as much as the romance. Disclaimer though: I'm Australian, so I might have found some of the jokes much funnier than Americans might. Ordering a flat white for shits and giggles had me in stitches!
The characters are beautifully built and flawed but loveable. My only reason for dropping a star is I felt the ending needed an epilogue.. The book ending felt sudden and caught me by surprise. But then perhaps it's because I was enjoying it so much and wasn't ready to leave their world. I'm not sure.
The narration was en point. It's my first time listening to Joel and I'll definitely be stalking his narrations now. As a non Australian he pretty much nailed the accent (I get the feeling he was channelling Cleaver Greene). He even got the regional Queensland peculiarities right. I assume he might have liaised with Lisa about those. His comic timing was excellent. I felt some of the American accents were a little dodgy but I figured it must be really difficult to flip from one to the other so quickly! Overall it was an excellent performance and really contributed to the enjoyment of the book.
I've listened a lot from these authors and thoroughly enjoy their collaboration.

This is the first book I’ve listened to by Lisa Henry, J. A. Rock but will not be the last. I remember choosing the book because of the name and I’ve enjoyed Joel Leslie as a narrator before, but the pace of the story and the characters drew me so that I ended up listening to the whole book in one day.
This book was worth the credit and I look forward to book two being released.

Read it and then listen!

I've loved this book from the start, Mark is an adorable "angry bunny" and Deacon is exactly what he needs. Like so many of Rock's and Henry's collaborations this manages to be all the things, sweet as honey, funny as Hell, and hot AF. I will be re-reading or re-listening to this for all time.

Audio: Amazing. I don't always love Leslie's narrations but he was absolutely spot on with this one. His voice for Mark was fantastic and he managed to make a somewhat large cast of secondary characters distinct. Well done.

Witty, Poignant, and a little Kinky

This is one of the best narration that I have heard to date. Great job by Joel Leslie with great words by Lisa Henry and J.A. Rock. Fun times!

This book would of been amazing.

Again I don’t think I would have read this book the same as I listened to it. Joel is perfection when it comes to sassy Australian/UK characters and it made Mark all the more endearing. Other than the abuse from Bengal being a bit brutal to listen to (which was an end I really needed tied up), I REALLY needed a epilogue. I know there are more in the series but they aren’t about Mark and Deacon. Also… there was no meeting between Deacon’s mom and Mark. I just felt like it kinda ended abruptly.

Such a fun listen

This one is a really fun listen with good narration and wonderful characters. I laughed so hard. It's on the longer side but you don't feel the time at all.

This book is filled with sex and very light on story. Also extends into fetishes.

Non creative boring to listen to. Narrator was awful. I definitely would not recommend this book. Very empty.