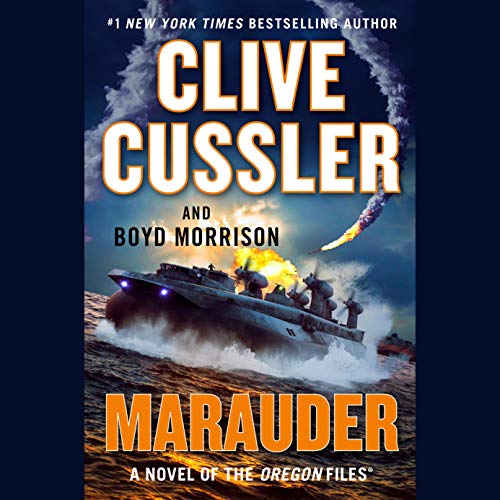 It is up to Juan Cabrillo and the crew of his ship, the Oregon, to stop a terrorist plot to release a deadly chemical weapon across the globe in the explosive new novel in Clive Cussler's number-one New York Times best-selling series.

While interrupting an attack on a Kuwaiti oil tanker, Juan Cabrillo and his team discover something even more dangerous: A ruthless billionaire's dying wish has allowed a paralyzing chemical to end up in the hands of a terrorist group. When an Oregon crew member falls victim to the poison, Juan Cabrillo will stop at nothing to find an antidote before it is too late. He and his team must connect an ancient mystery with a cunning modern enemy in order to save millions of innocent lives, including their own.

So good to see Juan and the crew back in action!

This is a very good Oregon Files book with the crew and a couple of the newer ones. The story lives up to the past books and I like the new features mention on this new Oregon. I am hoping this is not the last one and another book can come along and use all these neat gadgets in a new book. The characters are the ones I like and the perils of getting the results they need make for a good story. Scott, as always, brings it all to life very well.

Everything u could ask for!! Lots of action, good reader, and suspense!! Loved it! If there isn't a crew and boat like this, then there should be!
Ward off terrorist attacks!

It's Cussler. It's Carillio. It's the Oregon. It's Scott Brick. What more is there to say?

This is my favorite of all the different series’s that Clive Cussler has. Glad to see he’s still writing new ones.
Jewel 💎

This is yet another great book by Mr. Cussler about the "Corporation " or part of the crew of the Oregon. It's interesting how after so many books he is still able to put out another great book that keeps the reader/listener interested in what is going on in the book. As always Mr. Brick does well on making the different voices necessary for the portrayal of the book.

Maybe the best yet

The Oregon files is probably my favorite of all the Clive Cussler series and this may be the best of that series yet.

Thrilling to the end! I love this series!

The Oregon and it's free are my kind of super heroes and always love the performance by Scott Brick!

Scott Brick is awesome, his Australian accent is not

Love Scott brick but his ozzy accent is just plain hard to listen to.
Being that 1/2 the characters in this story are Australian this book was painful to listen to haha