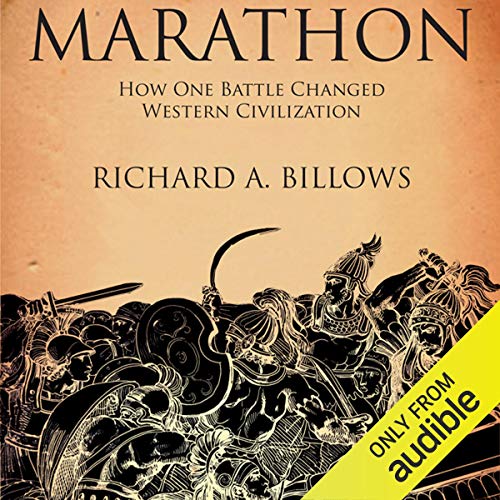 Published to coincide with Marathon's 2500th anniversary, a riveting history of the historic battle.

The Battle of Marathon in 490 B.C. is not only understood as the most decisive event in the struggle between the Greeks and the Persians, but can also be seen as perhaps the most significant moment in our collective history.

10,000 Athenian citizens faced a Persian military force of more than 25,000. A Greek victory appeared impossible, but the men of Athens were tenacious and the Persians were defeated. Following the battle, the Athenian hoplite army ran 26.5 miles from Marathon to Athens to defend their port from the Persian navy. Although they had just run the great distance in heavy armor, the Athenians won the battle and drove the Persian forces from Attica. Greek freedom ensued and the achievements of the culture became much of the basis for Western civilization.

In this comprehensive and engrossing treatment with 27 illustrations and 5 maps, Richard Billows captures the drama of that day 2500 years ago and the ramifications it has had throughout Western history.

"Acutely sensitive... Billows, taking the long view, sees Marathon as preserving Athenian democracy and thus all that we think of as our classical heritage." ( Wall Street Journal)
"The story's a classic: An outnumbered band of Athenians pushes back the mighty Persian army. But the battle of Marathon, 2,500 years ago in ancient Greece, left a legacy that extends far beyond the name of a famous race." ( National Public Radio)
"Even if you¹re tough enough to survive the New York City Marathon, you'd probably have little chance to survive the original race in which Greek messenger Pheidippides ran 26 miles from Marathon to Athens to announce victory over the Persians. Historian Billows argues that Pheidippides' run, which inspired the modern marathon race, introduced at the Athens Olympic Games of 1896, was a lot more challenging -- a 280-mile round-trip jog to Sparta to ask for aid, with the entire Greek army in tow." ( New York Post )

While at times difficult to keep up with the barrage of names and places for a casual fan of history like me, especially in the audio format, this book shines in recreating the world in which motivations for the battle of Marathon can be understood for both sides of the conflict. Billow's attention to explaining the origins of both Greek and Persian civilizations and historical run up to the actual conflict make it's significance that much more profound. I was left wishing I could time travel.

Would you listen to Marathon again? Why?

I'm listening to it over and over again. Contrary to what the cover might seem to imply, it's not a *300* type book. Instead, it uses the battle as a lens to understand Athenian, Persian, and, to an extent, Greek culture--about all of which, it explodes misconceptions from hindsight bias. Indeed, to only focus on the battle, especially with as little as we know in detail about it, for the entire book, would make it that type of book that puts people in the hospital if they foolishly had decided to read the whole thing. This is an excellent, readable, insightful work that rewards even re-reading, and I say that as somebody fairly knowledgeable about the ancient world.

Jeremy Gage is excellent, especially in his descriptions of the battle.

I wouldn't say that this is a moving book, although the descriptions of Athenians hurrying back to guard Athens after their victory at Marathon help you to realize Marathon was not a one-off, day thing as superficial history might have it. Indeed, these descriptions really help you to feel the dramatic tension of that day and night.

It is a book meant to challenge practical assumptions about Marathon, ancient Athens, and the Persians, and therein lies its fascination for me.

There's a lot more to this book than the title indicates. Professor Billows uses the battle as a jumping off point for covering much of the latest scholarship around the formation of classical Greek culture. Well written and tightly organized.

Takes awhile to get to the actual battle

It was a true Marathon of ancient history before anything was even mentioned about the battle of Marathon.

This is a 9 hour book referring to the battle of Marathon. The first six hours are about the political history of Athens and its neighbors. The next hour is devoted to the actual battle where most descriptions are prefaced by “according to Herodotus”. Then it becomes a survey of architecture, drama, philosophy and sculpture.

Would you listen to Marathon again? Why?

Yes- superb narration pulls you into the full-fledged story, which is rich in history, & deep in details that permeate our Western culture

He made you feel everything was relevant

Democracy was bought with blood- know why we're not Spartans

Took too long to get to the battle

I got the book in preparation for my Marathon to get a little idea about the history of the battle of the famous run. Though it started off well, the book went into almost too much background detail and it wasn't until the preparation and the battle for Marathon that it got really good. If you skipped to chapter 4 or 5 and listened to the end, you would find it a great book. Perhaps the abridged version did this. But was far as the unabridged version, I rate it just average (because of its boring and unnecessarily long first half of the book).