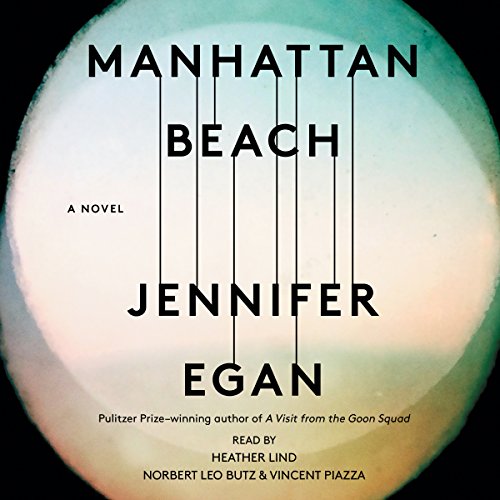 In contrast to her Pulitzer Prize-winning and very modern A Visit From the Goon Squad, Jennifer Egan's Manhattan Beach is traditional historical fiction in every way. Obviously impeccably researched, it's a sweeping novel steeped in the atmosphere of NYC, in particular the seaport neighborhoods of Brooklyn, from the Great Depression to WWII. Adding to Egan's brilliantly descriptive prose are the outstanding performances by narrators Norbert Leo Butz (two-time Tony Award winner), Heather Lind (TURN: Washington's Spies), and Vincent Piazza (Jersey Boys, Boardwalk Empire). This trio ups the ante, so to speak, making listening a truly immersive experience. —Tricia, Audible Editor

The long-awaited novel from the Pulitzer Prize-winning author of A Visit from the Goon Squad, Manhattan Beach opens in Brooklyn during the Great Depression. Anna Kerrigan, nearly 12 years old, accompanies her father to the house of a man who, she gleans, is crucial to the survival of her father and her family. Anna observes the uniformed servants, the lavishing of toys on the children, and some secret pact between her father and Dexter Styles.

Years later her father has disappeared, and the country is at war. Anna works at the Brooklyn Navy Yard, where women are allowed to hold jobs that had always belonged to men. She becomes the first female diver, the most dangerous and exclusive of occupations, repairing the ships that will help America win the war. She is the sole provider for her mother, a farm girl who had a brief and glamorous career as a Ziegfield folly, and her lovely, severely disabled sister. At a nightclub she chances to meet Styles, the man she visited with her father before he vanished, and she begins to understand the complexity of her father's life, the reasons he might have been murdered.

Mesmerizing, hauntingly beautiful, with the pace and atmosphere of a noir thriller and a wealth of detail about organized crime, the merchant marine, and the clash of classes in New York, Egan's first historical novel is a masterpiece, a deft, startling, intimate exploration of a transformative moment in the lives of women and men, America, and the world. Manhattan Beach is a magnificent novel by one of the greatest writers of our time.

I loved listening to this gorgeously written book
All the characters are vividly written. It was almost like watching a fabulous wartime movie.
I hope a movie is made from this book. !

I listen to many book on audible, but this was my favorite as it has male & female readers and made it more wonderful ! Highly recommend r

I usually love Jennifer Egan, however...

I have no idea how it happened, maybe it was after I restarted the book for the third time. After the first two times I thought I was in the groove of the book. But after round three I was still completely lost.

I was put off by the back and forth narration. That might have been one cause of my overall confusion. Heather Lind has a beautiful voice. Almost hypnotic. I had to pinch myself a couple of times so I would sit up straight and be an active listener.

It could have been I didn't listen to this book from beginning to end in one sitting. Maybe, but I usually follow most other books.

I think it was the story. A long, slow moving story.

Still love Jennifer Egan. Just not this one.

A Narrative of a Girl Diver

I can't put my finger on why I like this book so much. Anna proves to be a three dimensional character and the men in her life interact with that beautifully if not somewhat unexpectedly. The narration is executed with rich texture and the tone really helps to illuminate some of the era's slang.

A Book Only Critics Can Love

I found this book to be a slow-moving bore. The critics have raved about it because they love anything they can tie into gender, and they extol the books literary qualities, such as fine turns of phrase and imagery. Great if you are passing out an award, but for a general reader, this is a plodding read with no rewards at the end. The narration is adequate, neither adding to nor distracting from the book. With all the wonderful books available, this one is a good one to skip.

I read this book because I was interested in the unusual historical take on the War. The descriptions of diving and sea battle were well researched and interesting. But the plot was convoluted and sentimental with too many coincidences. Instead of writing in the language the characters would have used, Egan embellished the third person narrative voice with the kind of literary and metaphoric language one might find in a ladies' Victorian romance. All in all, full of literary dissonance.

The readers were only fair. Anna's character was rendered even more soppy by the febrile excitement of the reader, whose lisp seemed oddly artificial and annoying. The male reader was simply bland, unable to breathe life into the diverse cast of characters he had to portray.

I didn't hate my time listening to it, but looking back, I can't believe it was so long without really providing any substance. I felt like there was no climax. I was waiting for something spectacular to happen, and then it just ended without really giving any satisfaction.

What a great story! Well told; superb narration, strong characters, great plot!
It brought me back to the streets of Brooklyn of my youth.

I enjoyed this book very much. The story was a good one. However, the editors and/or performer did not know how to pronounce “ensign.” The reader pronounced it “en sine” instead of “en sin.” I believe there were a few other similar errors. However, overall it was well done. I have noticed in a few other productions that when the performer takes a break and returns his voice has a different timbre. Maybe he’s closer or further away from the microphone.

Huh? Great storyline and characters you really care about... then all of a sudden it ends. Abruptly. Like this review.

Wonderful, thoroughly absorbing novel that explores the lives of almost-inadvertently remarkable everyday New Yorkers, in the 1930s and the early 1940s. Anna, her father Eddie, nightclub owner Dexter. They're so wonderfully alive. This novel is more &amp;quot;traditional&amp;quot; than Egan's Pulitzer-winning &amp;quot;Greetings from the Goon Squad,&amp;quot; but it's nevertheless an utterly contemporary exploration of who we believe we are, and our relation to where we live and how that fuels our dreams.
More than the majority of novels set in New York, Egan's makes us aware of the sea that surrounds and defines the city. She plunges us into another age, and we are there as if by magic -- this is a historical novel that feels lived-in rather than researched.
The alternating voices in this audio book give it an added dimension, and Norbert Leo Butz, Heather Lind and Vincent Piazza capture the soul, longing and yearning of their characters. A triumph.