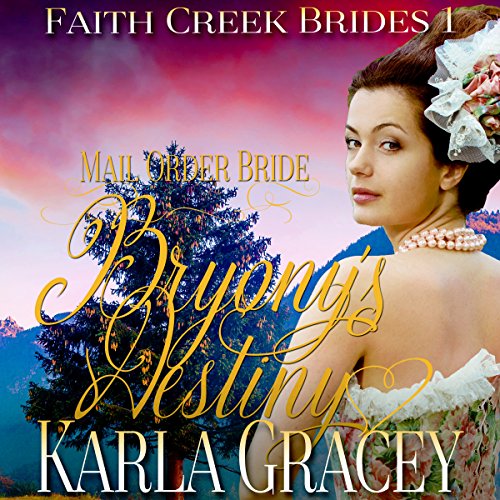 Bryony Shaw has never before thought of leaving Baltimore and her safe place in service, but things change for her when she is forced to become the nanny of her employer's son, Edwin. Finally finding the courage of her convictions, she confronts them about their lack of care. An orphan herself, she knows the pain of feeling abandoned and cannot bear the thought of such a young boy feeling that way, too. But what follows, nobody would ever have expected.

Cody Jenkins has always taken his chances, never shying away from things when they get too tough. But his determination has led him to put off many things that every man needs. Secretly he longs for a family, and especially a wife to love, and be loved by. He so nearly had it all, all those years ago, but when it all went wrong he ran away and nursed his wounds alone. Will he ever let anyone in close enough again?

This is a short sweet clean and to the point read that really got to me from the parents to the child that no one wants. To say I was shock is putting it mildly never in my wildest dreams did I see the outcome of her comforting the parents. Bryony has backbone as she makes a stand calling a spade a spade gets her in hot water with an outcome she was not expecting. She will gladly take on this challenge turning her back on a town that never really did anything for her. At first I was shocked when she stood up to the boy’s mother but it wasn’t long before I was saying You GO GIRL tell it like it is. She packs her bags and off she goes to start her new life with her mail order husband.

Ms. O’Farrell’s narration was outstanding with her delightful character voices to the emotion she gives them. I just adored her little boy voice she really puts thought into it with the emotions you can hear in her voice from the pain and anger to his excitement. Bryony character voice was exciting I loved how the anger showed through her voice when she talked to his parents and the love it showed when dealing with the boy and his trying ways. All the characters were a delight to hear as the narrator brought them to life. There are no repeating of words, no volume changes, no background noise just a delightful narration that really comes to life giving you smiles, chuckles and sadness as your heart breaks for one little boy and comes to life when things start going his way. I enjoyed listening to how the narrator brought to life the budding romance and brought it together with the love they had for each other. I thought her performance was outstanding and can’t wait to listen to more of her work.

I really liked Bryony who isn’t afraid to stand up for what she believes in. Traveling to the unknown marrying a man she knows little about takes a lot but to face him with the fall out of her life from Baltimore really takes some doing. She faces all new challenges head on never backing down. She is a go getter and a woman after my heart.

Cody’s heart got broken years ago but he is ready to start over. When he picks up all the letters of women who want to be his bride he is taken back with how empty headed they all are until he gets to Bryony’s letter which grabs his attention. He decides she is worth a chance he writes and sets up a meeting for her to become his bride. This is one lady he finds out is full of surprises and one that is after his own heart. It was so easy to fall in love with the man he is my hero in so many ways.

I loved this story the author pack a lot into a few pages covering all the important part. You will find no filler here every word, every scene plays a very important part. This is one author that knows how to spin a story full of excitement, adventure that will take your breath away. It was a wonderful, delightful read from start to finish. I can hardly wait for the next one to come out. Each of her stories is better than the last. She keeps her readers invested holding their attention why giving them lots of smiles.

The narrator was great. These books are fun short reads. They give you everything you want in a book. Love stories with no cliffhangers. It ends with happily ever after. A good quicky!!!

This is a nice short story. I don't feel it is missing anything at all. The characters are great and the story awesome. I must say I had never heard the name Bryony before, and I love it. I felt so bad for the kid in the story. When she spoke to the mother...I was think...oooooooooooo...

I look forward to listening.reading more in this series!

A nice way to start the series! I loved the way Bryony stood up to her mistress and the scene at the Botanical Gardens!
The narrator had a few sections where it was hard to decipher who was speaking and some oddly pronounced words, but overall it was very good!

I enjoyed listening to this novella. I have previously listened to the Ruby Springs series and enjoyed them too. I really like this author and her sweet stories. I think each of them are unique and different from the others but they each have a sweet and enjoyable romance. I will be sure to listen or read the rest of the books in this series. I liked the narrator too. She did a good job. I would listen to another story narrated by her. I am sure others will enjoy the book just as much as I did.

Most of the book is really good!

Before I talk about the narration let me just say I love Danielle‘s voice her regular ordinary voice. When she tries to sound Texan it sounds as if she is mocking the cow or thirst or people in Texas I don’t know which? I can’t imagine that is what you set out to do, I can only think maybe she has never really known a Texan. The story I thought was great I loved it a true mail order bride story, But again she made Cody‘s neighbor sound like Forrest Gump with an even worth had injury. I love the story though so maybe you should read it or if you do you know what Texan maybe you’ll be fine with the narration I was with half of it!

This book was So slow, and boring I finally gave up on it. First part of the story that sank the plot for me was, the age of the main character being said, to be 10 yrs old. The antics of the boy would have been Believable if the boy were 3-4 yrs old. The story line is Not worth the time it took to attempt listening to this story. I rarely can't finish a book. 😐

another excellent audible book by Karla Gracey. highly recommend this to anyone who likes mail order bride stories

I received this audible free. I gladly offer my honest review on this wonderful book

A wonderful story with a sweet ending. I really felt for the young boy who wasn't wanted who finally got a real family that loved him. I received this audible book free of charge in exchange for my honest review

Karla Gracey begins this new adventure with a new cast of characters in a new part of the country! Bryony is woman working in the kitchen of a wealthy homeowner, and temporarily becomes their son's nanny. Discontented with her life, she randomly reads the mail order bride ads. Cody, a gentleman beginning his dairy farm in Faith Creek, Texas is looking for a partner to become his bride. Love the letters they exchange, falling in love with both of them! These short novellas are packed with well developed characters, each having their own personalities. It is heartwarming to have the beginning of this new series having Edwin, the young boy, coming front and center with his energetic personality and the interaction between Bryony and Cody with him.

Danielle O'Farrell performs this book to perfection. Love her voice and is well suited for historical westerns.