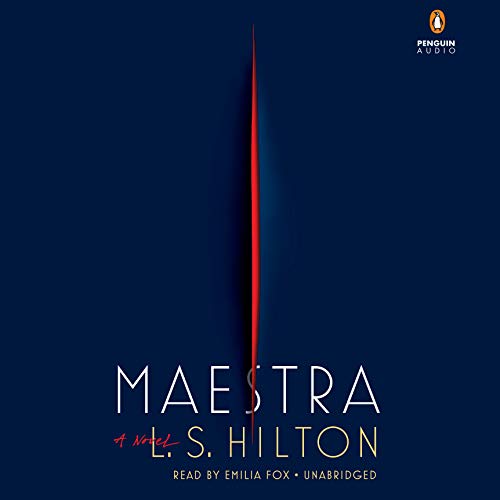 “One of this year’s most talked about novels.” (The Washington Post)

“A twenty-first-century femme fatale as lethal as Tom Ripley and as seductive as Bacall.” (Vogue)

A put-upon assistant at a prestigious London art house, Judith Rashleigh is well-educated, well-groomed, and impeccably behaved - keeping the darker desires she indulges on nights off as her own little secret.

But when Judith uncovers a dangerous heist, her life is shattered and she’s forced to run. Armed with just her wits and a talent for self-invention, she makes her way from the French Riviera to Geneva, Rome, and the nightclubs of Paris, determined to take back what is rightfully hers.

The beginning of a darkly irresistible trilogy, Maestra follows the rise of Judith, a woman whose vulnerability and ruthlessness have left listeners worldwide begging to know: Where do you go when you've gone too far?

Am sorry for the actress, I couldn't lessen when she changes her voice.
Then I read the book .
Judith is interesting. She open some windows on art and I needed to go to Wikipedia. And she opens some windows on the market and the fake. Then it's good story.

This was a really fast read. I found the main character of the sociopathic anti-heroine to be rather clever and interesting. However, while I found the overall story and main character oddly compelling, I would have enjoyed it much more minus the graphic and, I felt, rather unpleasant sex scenes. I give this a mixed review because the story was interesting enough to stand on its own without the many vivid descriptions of pointless and empty sex. The narrator did a great job.

The Skimm said it best "The European art world mixes with an underground world. This thriller is like 'The Talented Mr Ripley' meets 'The Girl with the Dragon Tattoo.

Do you recall landing that first job after college, the one in your field? While a "starter" position, would undoubtedly lead to success through hard work and one small break where you'd be able to show your worth? Meet Judith. In the highly competitive art world, she's the girl you went to college with that you KNOW will make her mark on the world.

When that (seemingly) golden opportunity to show her true value to her employers arises, Judith jumps at her chance to advance beyond the drudgery of her entry level position. However who thinks about office politics, petty jealousy, and basic greed- especially in that rose colored phase of life when your life is wide open in front of you?

While admittedly Judith leads a much more glamorous social life than I did when starting my career, her professional start mirrors that of most graduates just starting out. Struggling with finances, building professional credibility, her life is (for the most part) following her plan- and then comes the pivotal decision kicking off a new path.

very entertaining. worth the credit.

Great introduction book for a trilogy. The main character develops into a scandalous and intriguing woman with much more to learn about her. It's very graphic, so if you're not into that this book isn't for you. However, it all fits well into the theme of haute culture, sex, drugs, survival and the covet of prestige and status that is represented in the world of black market fine art dealing. Some confusion of small events and characters and lots of Italian and French phrases that don't get translated but very minor in the overall picture and doesn't detract from the story. I don't understand the low ratings, even if the book wasn't your style it's at minimum entertaining.

Definitely racy parts - just a heads up since I wasn't expecting that, but they were great in the story. I listened going back and forth from work and I couldn't wait to get in my car to hear what was next. Never a dull minute from beginning to end. The best part was Emilia Fox's performance. She did an incredible job of capturing the essence of every character and exactly the right tone and mood of every step of the story. I think she really made the story so interesting to listen to. I will be looking for others she has done. I recommend this for readers who enjoy mystery, suspense, and aren't offended by erotica. Enjoy!

A young , talented art graduate comes to the complex world of art galleries in London and gradually turns into a serial killer. The storyline is captivating, moving from Mayfair to South of France, Rome and then Paris. It could have been an interesting and pleasant reading with the glamour of exotic places, the complexity of art business and the excitement of unusual sex situations. But the underlying depth of characters is thin and basic, the plot not always consistent and believable and the -sex at times - a turnoff. It is a first book and it shows.
Hopefully the second book will more mature and fluid, with more enjoyable characters.

Maybe this story gets better, but after 3 hours it was all just glamour, expensive fashion, exotic travel and sex - expectations that it was more made this a boring book.

What made the experience of listening to Maestra the most enjoyable?

I loved everything about this book. Reminds me of a line from Eat Pray Love: The words are like truffles. The words the author uses to describe a room or person or event makes everything sound so interesting.

I loved every page and was continually surprised where the story went.

Which character – as performed by Emilia Fox – was your favorite?

Judith. By the end of the book you feel like she's a real part of your life, and I miss her!

No, I wanted to savor it. Didn't want it to end.

Is it really to be continued...?

Where does Maestra rank among all the audiobooks you’ve listened to so far?

Not since the kinky Wachowski film "Bound" have I found a crime caper this captivating. Intrigue amidst characters who never turn their back on one another, with all of the appropriate twists and turns one expects of the genre. From gamy sexual encounters to very snooty high society settings, the energy and the characters make the listener impatient for more.

While not exactly a couple,the two main characters seem to work best as a team...for a while.

Hard to choose - the landscape is varied and many, many sequences linger.

If only! And while it seems destined for film, one enjoys the book so much one wishes for a sequel.

Be sure to get the right version of the book, which is available in more than one language!

Take it for what it is

I actually enjoyed 50 shades of gray and read the twilight series as if my life depended on it. I love a story that sucks me in and this one did. Some parts were predictable but I loved it and can't wait for the next!