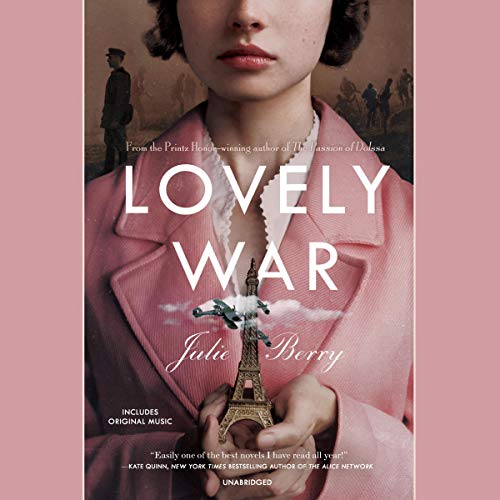 Listen to the novel New York Times best-selling author of The Alice Network Kate Quinn called "easily one of the best novels I have read all year". A critically acclaimed, multilayered romance set in the perilous days of World Wars I and II, where gods hold the fates - and the hearts - of four mortals in their hands.

They are Hazel, James, Aubrey, and Colette. A classical pianist from London, a British would-be architect turned soldier, a Harlem-born ragtime genius in the US Army, and a Belgian orphan with a gorgeous voice and a devastating past. Their story, as told by goddess Aphrodite, who must spin the tale or face judgment on Mount Olympus, is filled with hope and heartbreak, prejudice and passion, and reveals that, though war is a formidable force, it's no match for the transcendent power of love.

Hailed by critics, Lovely War has received seven starred reviews and is an indie best seller. Author Julie Berry has been called "a modern master of historical fiction" by Bookpage and "a celestially inspired storyteller" by The New York Times, and Lovely War is truly her masterwork.

"This fascinating, gorgeously written novel of World War I will grip you and remind you that the greatest danger is closing our hearts to love." (Nancy Werlin, National Book Award honoree and New York Times best seller)

“Julie Berry writes the past as if she lived it.” (Jennifer Donnelly, New York Times best-selling author)

“Scheherazade has nothing on Berry.... An unforgettable romance so Olympian in scope, human at its core, and lyrical in its prose that it must be divinely inspired.” (Kirkus Reviews)

Exquisitely written WW1 love stories narrated by Aphrodite and other Greek Gods who have their own need for love and in misplaced efforts to gain it, do stupid impetuous things (one would think god’s to be above the frailties of mortals), including adultery, forgiveness, understanding, blaming, and making deals that go against the fates. All the tragedies of war, bigotry, the changes that began in the US that lead eventually lead to the abolition of segregation, rights to vote, work, education, equal housing rights. The war scenes, letters, horrible contradictions, tolarence and cover up of murders within the military are just a handful of what this novel contains. It is brilliantly written, and believable. I fell in love with the main and secondary characters, have gained a deeper understanding of was and it’s grave depravation, ability to wipe out families and towns, and the toll that the evolution of war took on multiple countries, people, and had shaped the world as we know it today.

I loved this book and will listen to it again. The women are heroins although not spies as in other well written historical fictional. It was about coming of age during wartime, loss, love, and the power of the human spirit to commit and overcome great tragedy. The stories depicted, although fiction has true and factual characters and events that lend this to be such credible depiction of heart.

This is a new favorite author for me. I can’t wait to read more of her work. Her writing (unlike mine) is articulate, beautiful, and made me stretch in my role as the reader and observer of mortal life - love stories in war time being depicted by Greek gods. I though, “what is happening?” and how can the perspective of Greek Gods tie together? Keep reading (or listening). The characters both mortal and Gods bring an unusual perspective to war & love. I thing I may even enjoy learning more about Greek Gods because their characters became real to me for the first time in this writing (other than Disney’s Hercules).

I so loved this book; the writing, the characters, the setting, and the audio delivery, and hope you will love it too!

Bravo to all those who made this audio book available. Thank you.

A Love Story - A Flawed Mishmash

This novel is a war time love story and as such falls in line with likely thousands of other war time love stories. Perhaps because the genre is common the author, Julie Berry wanted her work to standout from the crowd by framing the story of her four protagonists via narratives presented by Greek gods. The initial chapter where this construct is set up had me truly confused as I had not fully read the book details ahead of time wherein it was stated that Apollo, Aphrodite, Hades, Ares, etc would be doing so. Once the reader moves away from the introduction to Aphrodite and Ares “trial” and onto the lovers’ war tale, the novel was an engaging and light listen despite the horrors of war. I kept asking myself, however, why the utilization of Greek gods to tell the story and for them to insinuate themselves into the characters actions via godlike influences. Initially I thought that eventually it will all tie in and I’ll get this author’s conceit, appreciating her choice. That realization never materialized. The gods were distractions and I feel rather silly.

The silliness was exacerbated by the voice performances of three of the leading readers: Jayne Entwistle reading as Aphrodite, Dion Graham as Apollo, and John Lee as Hades. In Entwistle’s case, her voice sounds like a prepubescent girl and not at all like the goddess of love, sensuality, and passion despite the words she’s reading. Dion Graham as Apollo and who was the main presenter of the African American soldier/musician (Aubry Edwards) read his part as if he was at the Apollo theater making Apollo sound Black and hip. Finally Hades performed by John Lee, a Brit, was so confused by his remit that when he had the job of speaking dialogue of the Aubry Edwards, instead of trying to affect a genuine African American cadence/accent, he incomprehensibly made him sound like he was white wise-guy from Brooklyn. For me, none of the voice actors were effective and I think it’s because they were confused by the set up as well. It seems as though the producer told them to adopt the attitudes of the characters the gods were presenting as opposed to the gods that they were.

I’ve read several positive reviews of this book and well, you never know what people will like or dislike. At the end, Julie Berry reads quite a few interesting end notes regarding her research into the book and that section is more compelling than the entire novel. She obviously did her homework and I would be inclined to read further into her suggested reading and wish she had just stuck to a perfectly reasonable novel based on that research as opposed to incongruously insinuating Greek god narrators into the mix. And if these distracting gods just had to be there, have the voice actors be directed to narrate like the gods not the mere mortals.

I wept as I listened to this story. My great uncle Leo registered for the draft in June of 1917 and in May of 1918, was in a ship bound for the war. By October of 1918, he died of wounds sustained in battle. He had given money to my grandmother for her children’s education. At that time, she didn’t have children and her own husband was fighting overseas. She held onto the money and eventually purchased a piano for her children’s musical education. That piano is in my home and Leo is buried in Arlington cemetery. Julie Berry is one of my favorite authors. I highly recommend this book - gorgeously written and performed.

Lovely account of men, women, and racial experiences in WW1

Many books I’ve read about WW1 and WW2 have been focused on women OR men. This novel creates a full picture of the war’s effects on women, men, race, and nationalism. Rarely has PTS(D) been introduced as a result of service, so that was nice to see included in the broader look at war. It’s not a gory book but I would have liked a little more of a detailed account of James’s battles. Overall, if war novels are your jam and you’re not looking for something like The Nightingale or Unbroken, then this romantic version is a light and fun read/listen. The narrators are also fantastic.

The triumph of love despite war, bigotry, trauma, disability, pride, distance, and other sorrows of life is a beautiful reminder of the goodness in the world and our responsibilities to make more room for goodness, beauty, and love in our own lives.

The various narrators add to this beautifully told story. Love the addition of Greek mythology

The Greek Gods were a distraction

I liked the stories about James, Hazel, Colette, and Aubrey, but the addition of the Greek Gods was annoying and distracting.

Romance in time of war. With greek gods present?

“Lovely War” narration was entertaining and engaging. I liked the different readers and their ability to show emotion throughout the piece.

I don’t normally read romances, but I was invested in both tales of devotion. Both couples seemed to grow past the outer beauty and love the interior of their sweetheart. What made this narrative more captivating was the historical aspect surrounding the romance. All characters played a hand in the result of WWI. Including the immortals on Mount Olympus.

“Lovely War” is beautifully written, but it strays from it's purpose and certain maturity in the story.

Julie you are amazing to pull the roles and skills of Greek God's into history while cementing lives with the miortar of details. I loved the musical references so perfectly placed, and because of audible, much more meaning than words on a page. Thank you for your gifts and talents.

A beautifully written story that clutches your heart in its hands. One of the most touching love stories that I think I’ve ever read. This story touches on so many important matters in history that are still so relevant, and weaves a story of a love so true, so pure.

This is such a beautiful and touching story told in a very creative way. In Lovely War multiple Greek Gods narrate the love story of two couples in WWI as "evidence" for a trial. My problem with the audiobook was that there was a constant change of voice actors for the same characters. For example, the voice of Aphrodite was a different one in the present storyline than her voice in the storyline in which she tells the story of the lovers. This was the case for EVERY Greek God that narrated the story, and they were like 5 in total. Furthermore, the voice of the lovers also changed with the time and that was also confusing. I don't understand why you would use so many different voice actors.

In addition to all that which was already very annoying and confusing for the story, you would also get really random "piano music" noise in certain parts and this was also not constant at all. For instance, in one chapter a character would play the piano and the background music would start, and in the next piano scene there was no background music at all. This background music would also play at certain ends but not on all of them, and I just found it to be very random and did not add to the audiobook experience.

The story is a solid 4 stars but I would personally recommend to read this book in a physical copy/eBook.