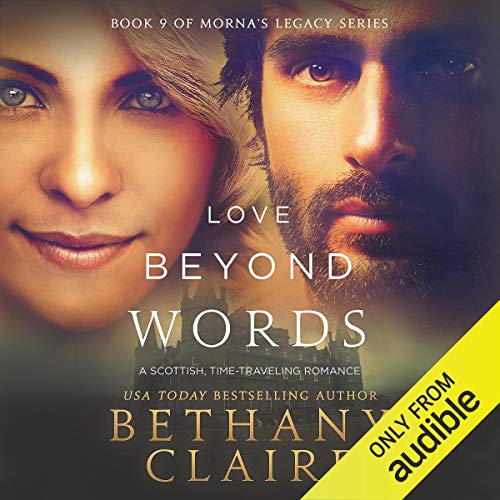 All she needs is someone to prove her wrong.

Laurel's life bears no resemblance to the love stories she writes. While handsome heroes are easy to imagine, they're much more difficult to find. Years of bad dates with creepy men have left her feeling cynical toward all things related to love. When she and her best friend find themselves caught up in Morna's meddling magic and are transported to 17th-century Scotland, Laurel meets a man who threatens to change her attitude toward matters of the heart.

After two years away, Raudrich returns to his home on The Isle of Eight Lairds to resume the duty he's pledged his life to. When he arrives, he finds an out-of-time lassie asleep in his bed. The woman intrigues him, and it doesn't take long before she captures his heart. But something inside causes her to resist her feelings. If only he could help her love herself, perhaps she would have room in her heart to love him in return.

As their feelings grow, so does the strength of an evil held captive beneath the castle - an evil that will do anything to escape. Will Laurel open herself up to the possibility of love? If she does, can she find the power within herself to outwit the evil she's destined to face?

Fell asleep a few times trying to read. Narrator is quite good. But unfortunately could not revive this story. Huge re-direction from the usually expected Scottish time-travel for this author. Generally love Ms Claire's writings. But not this book :-(

What did you love best about Love Beyond Words: A Scottish Time Travel Romance?

What I loved best about Love Beyond Words was that it surprisingly took the Morna's Legacy Series in a brand new direction. I loved how it took two new characters who were introduced in Love Beyond Reach and transported them to the 17th century to a new part of Scotland with many new characters.

I loved how the new story had elements of both Morna's magic that we're familiar with and combined it with magic from new sources including some super natural characters.

Lily Collingwood took an eBook that I had already read and fallen in love with to new heights! Right from the beginning- the way she articulated the conversations between the two sisters was so real. It reminded me of wonderful talks I've had with my own sisters.

Bethany Claire had introduced several new characters in this book. Lily Collingwood's performance of the many new male voices as well as the voices of the two new female supernatural characters was so well done and so believable.

This book was like ear candy. It was very tastefully done. I highly recommend the audible version of Love Beyond Words.

There was a moment that really moved me that I won't go into detail about because I don't like spoilers, but witnessing the lengths a character went through to save the man she loved...where she had to call upon all of her wit and acting skills was outstanding.

This was truly a magical love story...love between two sisters, love between good friends, learning how to love one's self and an incredible happily ever after romance. Buy this audio book!

What a story!!! This is such a fresh take on the series. With all of the new characters and a few from previous books; this love story has wonderfully new magic and the same meddling witch we all wish could meddle in our own lives.

Truly enjoyed the audible version. I had read the book but hearing it on audible was such a joy. Lily gave the characters new life. This book has several male characters and Lily did an awesome job with the changes in voice to match the character. The story was great and of course a HEA. Anyone who enjoys romance and time travel will love this audible version.

I love your characters, your imagination and life lessons you engage within each story. This story helped me realize some of my own fears. Thank you for that.....Please write more, I’ll be waiting.

what a remarkable storyline

Wow, The story keeps getting better. Definetly a page turner. love the characters and storyline. Absolutely draws you in.

This story became obsessive to me. In a few scenes I didn't see how it could possibly be resolved. I'm sure some of the foreshadowing is for the Nextbook which I eagerly anticipate.

So, I was missing the Outlander series...just stellar....and got caught up for a time listening to time-travel, Scottish romances, and got caught up in this silly series of stories that I'm happy to put behind me now!!! By Book 4 or 5 or 6....the moral of the stories is: find a castle, travel back in time where there plenty of tall, handsome, strapping huge Scottish men from the 18th century waiting to bed and wed a modern-age woman, because they just love the modern-day woman's sassiness...yeah, that would've gone over really well.....anyway, then it's really no problem, because as the stories progress, why, the time travel portal is just a breeze to go thru and everyone just travels back and forth in time...and that meddling, predicting Morna just sends everyone what modern-day convenience they need at a whim!!! And, yes, I listened to all of them!!!! :) :) :)

Another great book in this series

Always enjoy Bethany's stories about Morna. Great book, now onto the next one in line.

Enjoyed another time travel book. Hopefully this series will not end soon. The author is very good at capturing this reader's imagination.