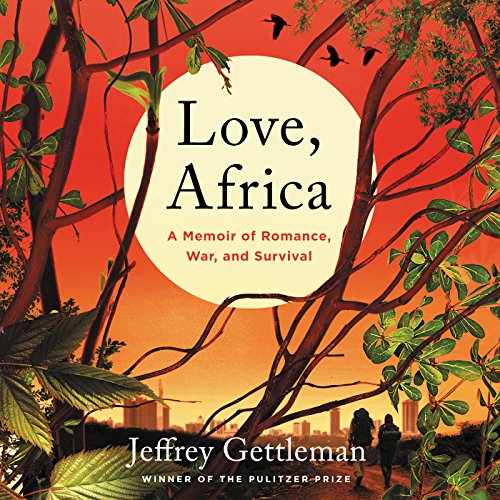 From Jeffrey Gettleman, a Pulitzer Prize-winning New York Times journalist, comes a memoir about finding love and finding a calling in one of the most violent yet most beautiful places in the world.

A seasoned war correspondent, Jeffrey Gettleman has covered every major conflict over the past 20 years, from Afghanistan to Iraq to the Congo. For the past decade, he has served as the East Africa bureau chief for the New York Times, fulfilling his teenage dream of living in Africa. Love, Africa is the story of how he got there - and of his difficult, winding path toward becoming a good reporter and a better man.

At 19 Gettleman fell in love - twice. On a community service trip in college, he went to Africa - a terrifying, exciting, dreamlike continent in the throes of change that imprinted itself on his imagination and heart. One day, he vowed, he would return there to stay. But around the same time, he also fell in love with Courtenay, a fellow Cornell student - the brightest, fiercest, kindest woman he'd ever met.

Courtenay became a lawyer in America, and all Gettleman wanted was to be with her. But he also hungered to be in Africa. For the next decade, he would waver between these two abiding passions. Finally, after a great deal of growing up, he learned to be honest with himself about what he wanted - a realization that ultimately fulfilled both of his deepest desires.

A beautifully rendered coming-of-age story in the tradition of Barbarian Days, Love, Africa is a tale of passion, professional rivalries, tortuous long-distance relationships, marital strife, forgiveness, parenthood, and happiness that explores the power of finding yourself in the most unexpected of places.

Would you consider the audio edition of Love, Africa to be better than the print version?

I didn't read the printed version so I have no way of comparing the two.

What other book might you compare Love, Africa to and why?

It has the complicated love story of a David Nicholls book with the current affairs value of The Economist. This guy was there for every major African event of the past twenty years: the rise of Somali pirates, Iraq (and Afghanistan), the Nairobi shopping mall attack. You get an insider's view that offers more than just a headline and death toll.

What does Charlie Thurston bring to the story that you wouldn’t experience if you just read the book?

From Ivy League lawyers to Ethiopian warlords, Charlie Thurston does a good job of navigating all the different characters with their myriad backgrounds and sensibilities.

In among all the chaos and despair of Africa, there's a love story at the heart of this book that you're really routing for.

Brutally honest and often, just brutal, this book will do more to give you the travel bug than any brochure.

One of the best books I recently listened to. Enjoyed every moment of it and will probably read it again.

From one who loves Africa

My heart was drawn to this book from the title, as the title itself was irresistible. I lived in Kenya from 1978 until 1986 and I am forever changed. This incredible book took me to so many places I’ve never been before and back to towns, roads, sights, smells, safaris, adventures, and Swahili words and sayings that resonate with a part of me that is the unique drama of Kenya, of Africa. This book was an experience for me, not just an amazing read. It was magnificently written, so personal and authentic. This book will take you on an unforgettable journey.

Liked the story, did not like the guy who read it

Did not like the guy who read it- he was too dramatic and did not sound like a normal person who would be telling stories from his life. The guy who read it made it seem so staged and overly dramatic. It took me out of it.

Africa and a bit of Florida

I enjoyed this true story very very much it had a lot of my hometown in it . Brooksville, Seffner Mango, Tampa, Florida. all of which is my hometown and stomping grounds. I love the story it was back and forth to Africa to Afghanistan and America , It was well worth listening to. I remember the newspaper articles and news on TV of the some of the things the writer talked about in this story. I listened to the whole story all in one day . I just could not quit listening to it . I will listen to this story many more times. I hope you get the chance to listen to the whole story it gets better and better and it is worth every bit of your time to listen. I hope you enjoy it too.😊

A book you can't stop listening to!

This book is very riveting and beautiful. A story of the love of a place, the love of a woman and the complexities that follow. The authors insights into Africa are compelling; I learned so much. I saw the author interviewed on PBS and what stood out to me was the person he is and I admired him. The narrator was very good, but at first his tone didn't fit the author as I experienced him. Now I realize it was the wisdom of a life well lived that shone thru on the interview, something a narrator could not convey.

I found the narrative rather boring. The author prides himself surviving through some dangerous situations during his career as journalist. He also had some difficulties in his relationship with his girlfriend and future wife. But there is definitely no romance. Also some deep evaluation of events in Africa is missing. The story is very weak, non persuasive and boring.

How to do what you love with someone you love.

Work/life balance is a difficult thing, especially when your work is your passion. This book covers decades of an individual life and describes some of the inherent tension in pursuing a lifelong passion.

As someone who had spent time in East Africa I found this story fascinating plus what it took for him to get there. The love story is and added plus. Highly recommend.

Very inspiring. I used to live in East Africa and many points described in this book were also experienced by us. I can recommend it to everybody, even if you don't have a history with Africa.