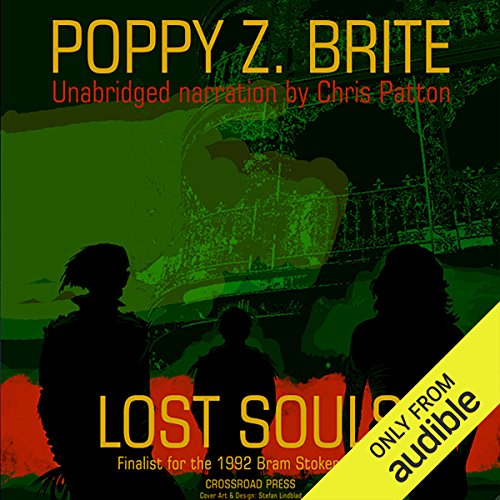 Three stylish vampires arrive in New Orleans just in time for Mardis Gras, and then disappear again. While in the city, the group's leader, Zillah, meets and impregnates an adolescent girl. Fifteen years later, the child of that pairing, a boy who calls himself simply "Nothing" is living with adoptive parents in the suburbs, where he – like so many other teens – feels isolated and out of place. The answer is, his father is a vampire, leaving Nothing hovering precariously between worlds.

When Nothing runs away from home he meets up with none other than Zillah and his small troupe, Molochai and Twig. Together they go on a quest to seek out Nothing's favorite band, Lost Souls. Nothing is aided along the way by a psychic named ghost, and their relationship leads to the ultimate inner battle where Nothing must choose between his wild, vampiric heritage, or preserving his humanity to save the life of another.

" Rather than horror, Lost Souls prompts disgust mixed with morbid titillation, but it will surely be devoured by genre aficionados. . " ( Publisher's Weekly)

This was my first exposure to Poppy Z Brite, actually. I'd previously avoided her out of a desire to avoid the cliches. But sometimes, cliches exist for a reason. Poppy Z Brite is like chocolate and absinthe for breakfast. Her work is dark and decadent and delicious. Chris Patton's reading was entirely competent and his voice is well suited for the teenagers in this story. I've already listened to this twice and I expect to listen to it again in the future. I only hope Audible acquires more work by Poppy Z Brite.

So glad there is finally some Poppy Z. Brite on audible. Entertaining, edgy and visceral. Great read.

Narrator ruins a good story! He mispronounces several word, and there are some odd background sounds. I loved Brite's stories, but this was almost painful to listen to.

Would you listen to Lost Souls again? Why?

This is a story I come back to every few years.

What other book might you compare Lost Souls to and why?

It's not like other vampire books because it's much darker and way less romantic.

Which character – as performed by Chris Patton – was your favorite?

Ghost is my favorite character.

Every minute of it. Death may be easy, maybe, but this book isn't. It wheels back snarling and then goes in, fangs bared, for The Kill.

Would you consider the audio edition of Lost Souls to be better than the print version?

What other book might you compare Lost Souls to and why?

Interview With The Vampire, maybe?

It felt like he just did not connect with the material. All the sad and clever felt lost.

That is just it, I felt I should be crying during several scenes that felt like they were treated with sort of disdain and slid over.

Adult themes that may be offensive to some

Excellent vampire novel. Literary and surprising. Carnival and Mardi Gras runs through the book as an extended metaphor. may be of particular interest to LGBTQ and Gothic readers

No characters in this book I connected with

I love vampire mythology, Stoker, Rice, whatever, so this seems like a no-brainer. Alas, this is one of the few books (audio or otherwise) in my life that I literally put down halfway through. Imagine a book of useless people/beings. No one you really care about. No swashbuckling hero! I really didn't even care enough for the villains to wish them ill.

Not something I would recommend

lots of gay vampire moments and incest. I felt like I was reading bad fanfiction