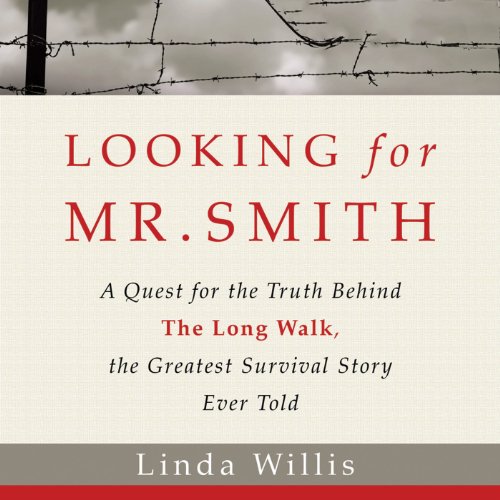 Kate Reading’s affable narration of Linda Willis’ investigation into the beloved best seller The Long Walk creates an intimate atmosphere. Willis had long admired the story of a group of prisoners of war who escaped Siberia and walked to India during the Second World War. Yet, she questioned whether everything in the book - first published in 1956 - was true. What really happened upon their arrival? She set off on a quest to prove the veracity of the account, which led her to interview scores of people and to scour archives. This audiobook presents her findings.

For the first time, the truth behind the best-selling adventure narrative The Long Walk.

Since 1956, The Long Walk has been, for many, the symbol of an immense love of freedom and has become one of the greatest true-life adventure stories of all time. The harrowing story about a group of POWs who escaped a labor camp in Siberia and walked to freedom in India during WWII deeply affected thousands of its readers, and Linda Willis was one of those moved by the story. But she had questions about its authenticity: Was it all true? What happened after their arrival in India? Were there others involved in the story? Who was Mr. Smith?

Though she was not a trained researcher, Willis felt compelled to look at some of the most powerful aspects of the story and to try to dig to the core of the truth behind The Long Walk. Willis’ investigation took her down unforeseen byways with many hours spent unraveling facts, truths, half-truths, rumors, and the like. She waded through archives, wrote and spoke to hundreds of people, and continued to seek out and verify the details of the greatest adventure narrative ever written. The path of Willis’ research will be a model for anyone attempting a similar search and who has ever thought about the story behind a book. No one who reads Looking for Mr. Smith will ever think of The Long Walk in the same way.

Thank you for the book. Looking forward to reading more by the same author. :)

there are several stories here: information revealed about slav rawicz, someone else who did the same walk, the mystery of Mr Smith and the author s journey of learning how to do research. she addresses what many fans of the long walk would ask. but uncovering a different survivor, not all stones were unturned...this I felt should have been explored. also, how did rawicz hear the story and know it so well.... someone must have told him..who? very enjoyable overall!

A good synopsis of a research project and should be heard with that in mind. It is note a recreational novel. I enjoyed it w

A good synopsis of a research project and should be heard with that in mind. It is note a recreational novel. I enjoyed it this in mind.