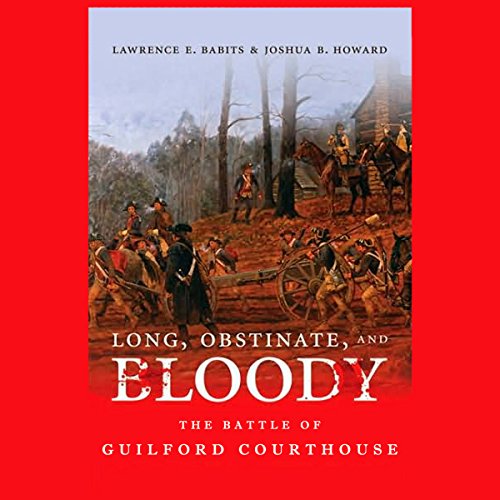 On 15 March 1781, the armies of Nathanael Greene and Lord Charles Cornwallis fought one of the bloodiest and most intense engagements of the American Revolution at the Guilford Courthouse in piedmont North Carolina. Although victorious, Cornwallis declared the conquest of the Carolinas impossible. He made the fateful decision to march into Virginia, eventually leading his army to the Yorktown surrender and clearing the way for American independence.

In the first book-length examination of the Guilford Courthouse engagement, Lawrence Babits and Joshua Howard - drawing from hundreds of previously underutilized pension documents, muster rolls, and personal accounts - piece together what really happened on the wooded plateau in what is today Greensboro, North Carolina. They painstakingly identify where individuals stood on the battlefield, when they were there, and what they could have seen, thus producing a bottom-up story of the engagement. The authors explain or discount several myths surrounding this battle while giving proper place to long-forgotten heroic actions. They elucidate the actions of the Continentals, British regulars, North Carolina and Virginia militiamen, and the role of American cavalry. Their detailed and comprehensive narrative extends into individual combatants' lives before and after the Revolution.

What disappointed you about Long, Obstinate, and Bloody?

I lived in the Carolinas for decades and love both Civil War and Revolutionary War history. Having been to the Guilford Courthouse battlefield, I found the descriptions of the battle confusing. This book starts by making the claims that it would clear up many of the confusing stories regarding the battle.

Too much time is spend itemizing every small detail of the armies. The attempts to bring to life the individuals involved in the battle get tangled by the jumping from person to person. There seems to be no flow in the narrative and the listener is required to spend too much trying to keep track of too many people.

I was really disappointed.

Reading as many historical books as people like myself do, we are all overly familiar with the soldiers and officers who receive the premonition that they would die in the battle. I don't care that they received that premonition. What I care about is how they handled themselves during the battle. True courage is doing your duty to the best of your ability in the face of your death. This book tries to do that, but fails.

Boring, monotonous, and without passion. I found my mind wandering off during his narration.That truly upset me because I came to this book with reasonable expectations that the reader would add to the story. He does not.

I will trade this book in for something more interesting, like the phone book.

I got this book to learn more about the Carolina's during the Revolutionary War as I've recently found out I had relatives that fought in some of the battles this book covers. This book is hurt tremendously by the amateur reader.