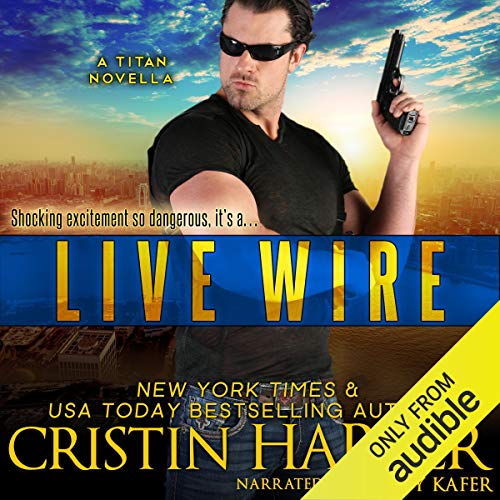 Titan Group is expanding. New recruits mean Jared Westin has potential new hires to scrutinize. What he didn't expect was his very pregnant wife Sugar to finagle her way onto the surveillance team as the prospects were assessed.

Her involvement in the simple observation goes dangerously wrong. She and best friend Lexi Black stumble into a problem with Russian mobsters. Sugar is forced to draw on her old ATF tricks, but weeks from her due date, she has no choice but to team up with Bishop O'Kane, a potential new recruit ,and Parker Black, Lexi's hacker husband, who must go undercover.

As Titan expands on the family side, Jared decides to expand on the business side. Sugar inserts her very pregnant self into the vetting process and somehow gets herself and Lexie tangled into a mess, putting the first potential recruit to the test.
The further into this series I get, I can't help but smile at the continuing excellent delivery Jeffrey Kafer makes with each book and Novella.

More Sugar and Jarrod and Lexi and Parker but we get a little more background on Jarrod as a simple surveillance turns into a quick op. This should be read after Parker & Lexi’s story. It is quick and pretty mild for a Titan book though Sugar and Jarrod’s personalities ring fairly true-just a bit more mellow than expected given the circumstances. Hope to see more of the extended family. Narration again good but would be better with the right female partner.

A reward for fans of the Titan series, especially if you prefer the funnier, less serious books. The first few Titan books are all about alpha warriors, action, and hot romances with smart and sassy women. While there’s tension and conflict, the fun, fights, and F-ing easily predominate. Later books in the series have storylines involving mental health, drug hallucinations, rape, and human trafficking (including the related Delta series) and, even though some of the Action N Amore features continue, those later books can be a bit more of a slog to get through.

This is a quickie focusing on pairs Jared & Sugar, and Parker & Lexi. This novella can stand alone, but you’ll get more out of the caper if you read the prior books - or at least the two books where these pairs get together: Book 3 (Westin’s Chase) and Book 8 (Black Dawn). A super preggo Sugar needs a distraction, so she co-ops Jared’s project of finding new Titan members and sets out with Lexi to personally scope out applicant Bishop.

A little action and a lot of Sugar-related hilarity ensues as the girls and Bishop find themselves in a situation with some bad Russians. Along the way, we are treated to one naughty scene involving each pair. Finally, more back story on Titan leader Jared and what makes him tick on the way to Sugar’s delivery of their baby.

All the stuff I love about the Titan series, without any of the downer conflicts or angsty backstories. Would have liked a tad more warrior action and I feel l like Bishop wasn’t fleshed out enough (or he almost seemed too much like Jared)... but for a fast fix of Titan goodness, these are minor issues.

This version is a humorous quick action packed novella of Thelma & Louise. It was a enjoyable story.

What made the experience of listening to Live Wire the most enjoyable?

What makes listening to a book is having the perfect narrator read to you. And Mr. Kafer was the perfect choice. He hooked me on both the series and wanting to see what else he'll read to me.

It has to be Jared. This story shows the incentive to what he does. Sad news is that this is just a teaser. The good news is that it should lead the reader to Westin's Chase. It also has you wanting to know more about who Sugar is.

He is the perfect choice. I have no problem having an idea what Jared Westin may look like and certainly sounds like. He made my choice of my next book in the series very easy. I have to know more about what Jared and Sugar's story is and Mr. Kafer just happens to narrate that story as well.

If you're looking for an audiobook that will take your mind off a day that may not be going too well then this book is the perfect choice. Add in the perfect narrator and everything else will just disappear. Mr. Kafer makes it very easy to just concentrate on what the author has written. He doesn't attempt to do a female voice and that's perfect.

This is one book that I can see myself listening to more than once. As I get more into the series, I would also have to come back and listen to this one. It's a great way to pass the time on a commute that can at times get frustrating. Even though this is a shorter story the author doesn't shortchange her reader by chopping up the story. But it's a great way to get hooked on an author and her series. I can't wait for more.

I voluntarily reviewed an Advance Audio Copy of this book.

I certainly enjoyed it! The narrator was great..such a deep voice! The story was fun with sweet moments and action too.
Loved the characters

I got the opportunity to listen to the Audible version of Live Wire for review and really enjoyed it! I don't usually go for Romantic Suspense, but Live Wire was such the perfect mix of action packed and character driven that I listened to it all in one chunk! I really liked that while Titan Group could be a completely testosterone fueled organization and the whole book be driven by the abundance of alpha males and bad guys, the women were really recognized for their strength and contributions to the mission - even while eight months pregnant! Meeting Jared, Sugar, Lexi, Parker, and Bishop really makes me want to (of course) start at the beginning of the series and continue on with the next one (which I think will be Bishop's story). I give Live Wire 4 out of 5 wine glasses and I especially appreciated the rich timbre of the narrators voice. Listening to the book really helped the time spent handling my household duties fly by!

A steamy glimpse into the Titan World!

Jeffery Kafer’s voice is deep and dark, which makes it perfect for a romantic suspense story. I really enjoyed his narration of the audiobook!

I’ve been hearing so many positive things about Cristin Harber’s popular Titan series that I jumped at the opportunity to review the Live Wire novella audiobook. I do love a good romantic suspense series and Live Wire does give those new to the series, like me, a lovely taste and feel for some of the characters that make up the Titan group. Although Live Wire didn’t explain the role of the Titan group, I was able to get the feel that Titan is made up of highly fierce individuals with various specialized skills who carry out dangerous operations. Live Wire also gives fans of the series more of couples Jared and Sugar (from Westin’s Chase) and Parker and Lexi (from Black Dawn).

Filled with steamy romantic encounters and a splash of intrigue and suspense, Live Wire is a quick and alluring novella to sample the Titan series. I’m now very interested in reading the other stories, especially Westin’s Chase and Black Dawn.

I loved this one

Lexi and a heavily pregnant Sugar go on a surveillance mission to check out a possible new recruit for Titan – Bishop O’Kane. A safe and easy job, or so they thought. When the gym they’re checking out is taken over by terrorists, they must work together with Bishop to get out in one piece.

Live Wire is a quick, easy listen. Under 3 hours. It’s really a cute story. It gives more depth to Jared Westin and explains why he is the way he is. Of course, this is Jared and Sugar, so expect some sexy time…although, Parker and Lexi give them a run for their money in the sexy time department. It was fun spending a little more time with two of the fan-favourite couples, who don’t disappoint in this book. The introduction to Bishop was fun and set’s up the listener for Bishop’s Queen (I already love him!)

I love Cristin Harber’s writing style, she always hits home with a great story that is well written and will have you laughing and sat on the edge of your seat wondering what’s going to happen. Not many authors can grab a listener’s attention in a novella enough to get the listener invested in the characters and the story, this isn’t a problem that Cristin has. From the opening chapter to the final one, she has me riveted.

Two of my favourite scenes are Bishop’s first meeting with Sugar, it was funny and quite endearing. I definitely wanted more of Bishop after that introduction. Also, Parker’s geek make-over, his interactions with Beth were hilarious. And let's take a moment to think about Jared and a baby…sigh, that big bad alpha is a big softie!

Jeffrey Kafer’s performance was great, as usual. He is awesome as Jared, he really plays the big bad alpha guy that totally melts for the women in his life well. Although there was one line that I had to listen to a couple of times because it sounded different than usual, maybe a southern accent, but just for the one line. And it could have easily just been me being weird. The subtle changes in his voice for the different characters really stand out. I’ve always loved how smoothly he transitions from male to female characters and that still stands with this book.

Catch up with some of the key players of Titan

I have to admit that I have not read or listened to any of the books in the Titan series by Cristin Harber before, but, I had the opportunity to listen to the audiobook of Live Wire so I jumped on it and I am so glad I did.

This story had me crying several times especially with the prologue, man that just gutted me. I enjoyed getting to know some of the key players in the Titan series and I look forward to reading more of this series.

Let me make a mention about the narrator of Live Wire, Jeffrey Kafer, since I did listen to the audiobook version, he has a very sexy voice and I could listen to him all day long....seriously Yummy!