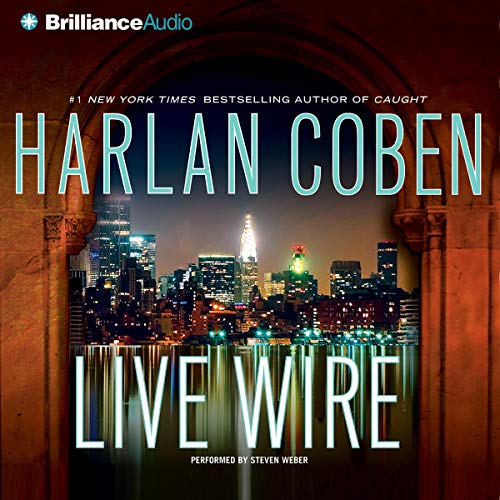 Harlan Coben has risen to the top of bestseller lists worldwide, attracting voracious audiences for his peerless novels of domestic suspense as well as those featuring his fan-favorite sports agent, Myron Bolitar. Now in Live Wire, he offers a knock-your-socks-off novel that will electrify all his fans: Myron’s family takes center stage.

Myron Bolitar has always dreamed about the voluptuous femme fatale walking into his office and asking for help. The woman standing in his doorway has killer curves all right: She’s eight months pregnant, which kind of ruins the fantasy. Former tennis star Suzze T and her rock star husband, Lex, are both clients, and over the years Myron has negotiated his share of contracts for the power pair. But now Lex has disappeared and a very pregnant Suzze is in tears, fearing the online rumors questioning the baby’s paternity have driven away the man she swears is the child’s father. For Myron, questions of fatherhood couldn’t hit closer to home, as his dad, Al, clings to life; the brother who abandoned them all years ago is in trouble; and Myron’s teenage nephew needs an authority figure. Myron is soon forced to confront deep secrets in Suzze’s past, his family’s mortality - and before Live Wire is over, his own.

What an enjoyable mystery! Loved the twists and turns. It kept me interested right from the beginning. Definitely a good book for my long commute.

I really enjoy this author but I enjoy his books so much more when they’re read by Steven Weber. He has a real gift for bringing all the characters to life. He has the right amount of snark, humor and seriousness for all of the parts of the story. Steven has become my favorite narrator and I hope he keeps reading more books for me to get lost in.

I won't give away the details, but I have a problem with part of the story. Myron is supposed to be able to find out information. Yet, for fifteen years he doesn't know the whereabouts of his brother. But that isn't the biggest inconsistency. After he found out his brother's family is in the United States, a public records search would have answered an important question. Why wasn't that done right away? I guess there had to be a reason for M.B. to chase after people demanding answers.
I only bought this book to find out more about Myron's family. ...it wasn't helpful.
Mr. Coben is consistently inconsistent.

This had become one of my favorite characters

great story and performance. Steven Webber does a great job with making each voice distinct.

One of my favorite authors, always keeps me interested and thinking. The characters are interesting and the stories always believable.