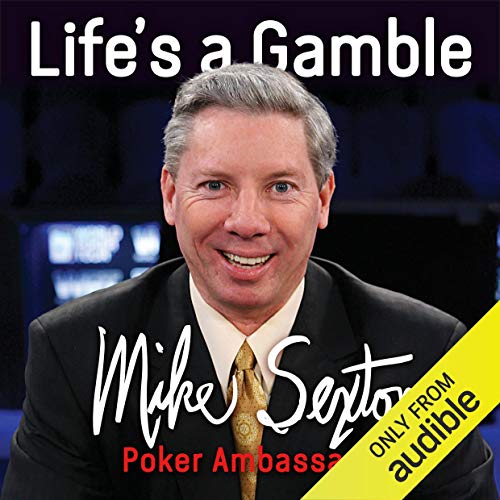 Mike Sexton is a legend in the poker world.

In a life spanning over four decades as a poker professional, Mike has excelled both on the felt and on the business side of poker. He is a World Series of Poker (WSOP) bracelet winner, helped create PartyPoker in 2001, and was a key player in an event that changed the poker world forever - the launch of the World Poker Tour (WPT) in 2002. He has been a commentator on the WPT, along with Vince Van Patten, since its inception.

In addition, Mike was recognized as poker's Top Ambassador at the Card Player Magazine Player of the Year Awards gala in 2006. That same year, he won WSOP Tournament of Champions, winning $1 million in prize money - half of which he donated to charity. He was inducted into the Poker Hall of Fame in 2009.

In this book, Mike recounts his personal experiences and gives his take on some of poker's legendary characters over the past 40 years. If you enjoy poker, are fascinated by the development of the game, and enjoy compelling poker, golf, and gambling adventures, then you'll love Life's a Gamble.

You likely know Mike Sexton from his enthusiastic commentary on the world poker tour, the televised poker show that changed poker forever and helped ignite the poker boom.
Before listening to his narration of his own memoir, that's all I knew about the author. I now know far more, and in as entertaining a manner as it's possible to learn about someone's fascinating life.
This book is not only about Mike; it is filled with stories of many of the legendary gambling names of the last two generations. I heard stories here I had heard nowhere else. While I would never want to live those stories, they were fascinating to learn.
Highly recommended.

This book is a MUST for every poker fan!

I actually own the hardcover of this book, and loved READING it so much that I purchased it on Audible so I could LISTEN to it on a long road trip. I enjoyed it even more in this format! Hearing these stories as told by Mike himself truly brings them to life.

Mike shares with us the intimate details of his own life, as well as touching, hilarious, and sometimes heartbreaking tales about some of the biggest pioneers of the game. It's a rare and entertaining glimpse into the world of high-stakes poker and the lives of legends like Doyle Brunson, Stu Ungar, Chip Reese and so many more.

Mike Sexton has left an indelible mark on the poker world ... his success and talent at the tables is unquestioned ... his demeanor is that of a true gentleman ... and his spot in the Poker Hall of Fame is well-deserved. He is one of the finest ambassadors of the game. Now he can add Outstanding Author and Storyteller to his impressive resume!

Life's A Gamble is a must-read for every poker fan ... and it's a great gift for anyone who loves the game!

If you love poker and are fascinated by high stakes gamblers and their stories you will seriously enjoy Mike Sexton’s book. The account of Mike’s Life to date and the fascinating tales that go with it are truly entertaining. This will remain a must listen again for me in my library. I hope Mike live’s long enough to write a sequel!

Overall, this was full of entertaining stories. If you have been around gambling at all, you will know some of the names and you will have seen or heard similar things. But, I was still shaking my head at some of these yarns. Crazy to say the least.

As far as criticism, I wish the book was edited a little tighter. Parts of some stories were told in the beginning only to be repeated later in the book. I understand the concept of wanting to give more details, but there were a few parts that just had word for word repeats.

But, I liked the book and it was even better with the author reading it. It reminded me of some of the old gamblers I knew telling their old stories.

Years of stories in this book. Very fun read. I recommend this book even if you have no interest an bo nothing about poker.

if you love history you'll enjoy life's a Gamble

Mike Sexton is an amazing story teller ,poker ambassador, it's a must listen poker fans

Musr Read for Every Poker

If you like poker and golf, this is a must read. you will enjoy Mike's stories.

My first book on Audible!

I really enjoyed Life's A Gamble and especially hearing Mike Sexton tell it himself. I've always enjoyed gambling myself just never had the money to do it much. It was great hearing all the stories and money that the legends would bet on.

Thanks for sharing your stories, Mike. They were really fun to listen to and you're a great narrator.

Mike is a great storyteller, if you like gambling and Las Vegas you will love this book. A very entertaining book and Mike did very well with the narration.