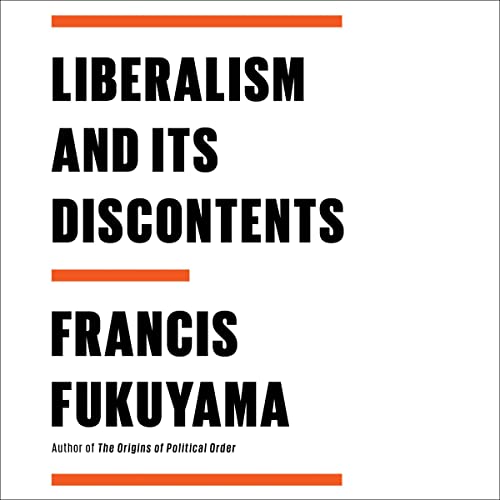 Liberalism and Its Discontents

An audiobook about the challenges to liberalism from the right and the left by the bestselling author of The Origins of Political Order.

Classical liberalism is in a state of crisis. Developed in the wake of Europe’s wars over religion and nationalism, liberalism is a system for governing diverse societies, which is grounded in fundamental principles of equality and the rule of law. It emphasizes the rights of individuals to pursue their own forms of happiness free from encroachment by government.

It's no secret that liberalism didn't always live up to its own ideals. In America, many people were denied equality before the law. Who counted as full human beings worthy of universal rights was contested for centuries, and only recently has this circle expanded to include women, African Americans, LGBTQ+ people, and others. Conservatives complain that liberalism empties the common life of meaning. As the renowned political philosopher Francis Fukuyama shows in Liberalism and Its Discontents, the principles of liberalism have also, in recent decades, been pushed to new extremes by both the right and the left: neoliberals made a cult of economic freedom, and progressives focused on identity over human universality as central to their political vision. The result, Fukuyama argues, has been a fracturing of our civil society and an increasing peril to our democracy.

In this clear account of our current political discontents, Fukuyama offers an essential defense of a revitalized liberalism for the twenty-first century.

A Macmillan Audio production from Farrar, Straus and Giroux.

I enjoy Fukyama. after his Origins series his understanding of political theory makes sense of our complex world.

A defense of liberalism

The author defends liberal traditions believed to be the human destiny in his "The End of History and the Last Man" published 30 years ago in 1992 at the eve of collapse of the Soviet empire. It lays out a strong argument of liberalism against the attack from the far right-- mainly Neoliberalism on economics, white nationalists on politics, and Evangelical conservatives on culture. It also presents a critique on the critical theory that has served as the intellectual foundation for identity politics of the progressive left challenging the liberal order's failures to protect equality. Though the threats to liberal democracies are from both the far right and extreme left, the threats from the former are clearly more immediate and direct. An example is Trump's and his hard-core nationalism followers' challenge of the very heart of the liberal principles of equality, diversity, and tolerance. The book is full of information and references, useful for both students of politics and the general audience. The title emulates Sigmund Freud's classics "Civilization and Its Discontents".

The idea in the book that Eastern spirituality, tied by the author to the movement of individual actualization in the west, somehow contributes to extremity of self identity is misunderstanding if not completely nonsense. Cultivating consciousness in the eastern philosophical tradition is for achieving a non-self (no Ego) which, to a large extent, can contribute to collectiveness and public spirit.