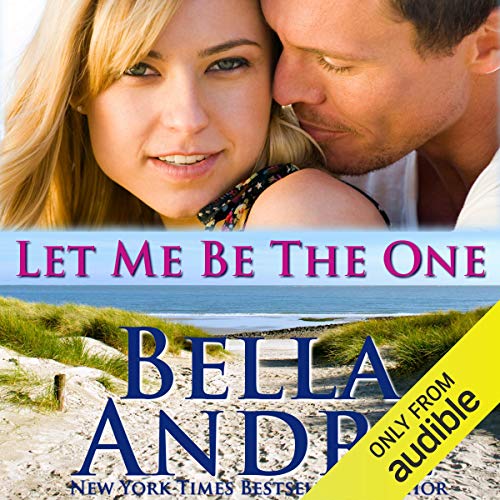 Let Me Be the One

In Let Me Be The One, the brand-new book in Bella Andre's New York Times and USA Today best-selling series about the Sullivan family, an unexpected friends-to-lovers romance might not only turn out to be so much hotter than anything bad-boy pro-baseball-player Ryan Sullivan has ever known...but much, much sweeter, too.

When Vicki Bennett saved Ryan Sullivan's life as a teenager, it was the beginning of a close friendship that never wavered despite her failed marriage to someone else and Ryan's well-earned reputation as a ladies man. So when she suddenly needs a pretend boyfriend to protect herself and her career from a powerful man's advances, he is the only person she can imagine asking.

Ryan will do anything to protect Vicki from harm, but when their "fake" kisses and caresses lead to an incredibly sensual night that neither of them can resist, will he have made the biggest mistake of all by irreparably jeopardizing their friendship? Or is it possible that what they've both been looking for has been right there the whole time…and the perfect combination of wicked and sweet, friendship and love, is finally within reach?

Ce que les auditeurs disent de Let Me Be the One

Childhood romance at its best

This book gets you from the very first sentence. Who does not love friends, unrequited love, and journey towards love? Who? Not me. I love this story line. In my option, this trope never gets old if done with any sort of care. Vicki Bennett goes on a long journey away from Ryan eventually coming back. Sure she has things to work out. Ryan knows what he wants and he is going to get it. Also, Vicki is a definite hero in this book in her own right. Two strong personalities.

The Sullivan family continues to get better and better as these books progress. In this book we meet one of the Seattle Sullivans. I assume when the 8 kids are all happy, Andre will start working on another branch of the family tree. Can't and don't want to think about that. I want to focus on the next in the series. This is another thumbs-uber-up.

This baseball player has all the right moves!

Let Me Be the One is the 6th book in the fabulous Sullivans series by Bella Andre. Woo-wee this book was much hotter than the previous books and I loved them all.

Ryan Sullivan has a well earned reputation as a ladies man. As the sexy, young pitcher of San Francisco’s professional baseball team he doesn't have to fight real hard to get the ladies. There is one particular girl, from his past, that he’s never been able to get, however. She was and has been his best friend since high school. It just seemed like it was never the right time to take the leap and risk their friendship. Now, she’s back in his life and needs his help. This is his chance to take care of his best friend and convince her they would be better as so much more.

Vicki Bennett is trying so hard to get a coveted art internship. Being propositioned by one of the judges can do nothing, but hurt her and now she is in the position to turn him down and really hurt her chances or take him up on it, which is really not an option at all. So, she goes for option 3. In a panic, she texts her high school best friend, whom she hasn't seen in a couple of years, and begs him to unexpectedly show up and play the part of her boyfriend. It seemed like a good idea at the time, but now the reality of this fake relationship is setting in. She is finding it very hard to separate her real attraction to Ryan. She’s always longed for a real relationship with Ryan, but has always been afraid to ruin a friendship that she cherished.

I listen to this book in audio format and it does not disappoint. Eva Kaminsky does a great job with the different characters and personalities this series has to offer.

For anyone that hasn't read this series read it now! I absolutely love this family and this series. Each book has its own sweet story, hot guy and great characters to offer, but this is one of my favorites. The heat between Vicki and Ryan was palpable. I swear there was smoke coming from my speakers.

Bella Andre brings Ryan to life in this series. We have heard of him but it wasn't till this story we got to know him. Now he's like the boy next door.

Cant fault the sullivans for a good light read!

Another good installment in the Sullivan series. Good light read. The Sullivan boys are the perfect boyfriends and as always the story leaves you waiting on the next one by introducing the next Sullivan's situation:-)

Would you consider the audio edition of Let Me Be the One to be better than the print version?

Yes characters are brought to life

Ryan Sullivan is a Big Hitter for sure !

Ryan Sullivan has always had a crush on Vicki Bennett from the day she “saved” him. Being teenagers though, it’s harder to get over asking someone out rather than being their best friend. Every time Ryan makes an attempt to show Vicki how he feels, he finds her in a situation that precludes him from going through. Throwing himself into baseball seems to be the only course. But now Vicki needs him, and Ryan will do everything he can to help her.
Vicki grew up with a crush on Ryan, but never thought he would return her feelings. Not one to sit back and allow things to happen to her, she moves on with her life, marries, moves abroad and subsequently divorces. Now back in San Francisco, she is trying to make her mark on the art world and get out of her ex-husband’s shadow, who is also an artist. When she goes after a fellowship, she inadvertently gets into a bad position where she needs Ryan’s help.
To get Vicki out of a sticky situation, Ryan agrees to play her boyfriend, when he wants so much more that just playacting. Both are hiding behind being scared of ruining their friendship if they ever really tried to enter into a deeper emotional relationship. Sacrifices on both sides must be made before a long term relationship can move forward.

Ryan is a baseball player, so we get to see just how easy baseball comes to him. He loves it and its not as much of a job as something he loves doing each day. But along with that career comes the publicity that Vicki doesn’t want to be part of. Throw in one of the fellowship board members threatening her, he ex-husband causing problems and a need to finally find recognition for herself, Vicki has a lot to consider before falling for the one man who has been her best friend. This is a wickedly sexy book, with both hero and heroine doing a lot of soul baring and searching. I love stories of hidden love that go on for a long time, only to finally hit the wall. These two to everyone were an obvious match made in heaven. It just took being thrown together for them to realize it themselves. :)

I LOVE THE SULLIVANS

If you could sum up Let Me Be the One in three words, what would they be?

What does Eva Kaminsky bring to the story that you wouldn’t experience if you just read the book?

Yes, I would drive around in my car listening because I was so addicting.

What made the experience of listening to Let Me Be the One the most enjoyable?

I enjoyed all the sullivan series by Bella Andre.

What other book might you compare Let Me Be the One to and why?

Have you listened to any of Eva Kaminsky’s other performances before? How does this one compare?

This narrator have really good performance

Don't miss out this book

Loved this book!! Written wonderfully and it's a beautiful love story! Didn't want it to end!

love all the Sullivan stories

just wish they would have talked to each other sooner. Seems a bit far fetched for best friends.