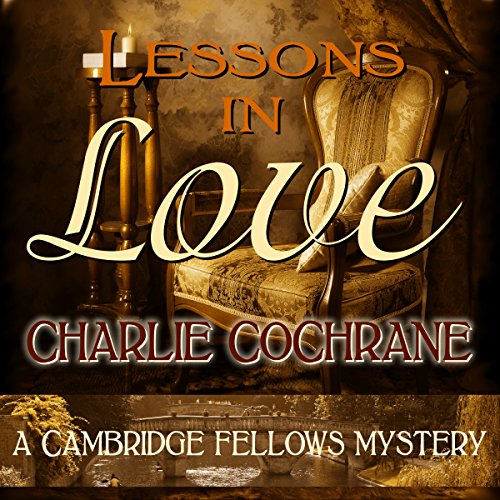 He didn't think he had a heart. Until he lost it.

Jonty Stewart is handsome and outgoing, with blood as blue as his eyes. When he takes up a teaching post at the college where he studied, his dynamic style acts as an agent for change within the archaic institution. He also has a catalytic effect on Orlando Coppersmith.

Orlando is a brilliant, introverted mathematician with very little experience of life outside the university walls. He strikes up an alliance with Jonty and soon finds himself heart-deep in feelings he's never experienced. Before long their friendship blossoms into more than either man had hoped.

Then a student is murdered within St. Bride's. Then another...and another. All the victims have one thing in common: a penchant for men. Asked by the police to serve as their eyes and ears within the college, Jonty and Orlando risk exposing a love affair that could make them the killer's next target.

Sweet story ruined by the narrator. Jonty and Orlando are in their late 20's, not last 70's. I thought I could get used to the slow, old voice, but couldn't do it.

What did you love best about Lessons in Love?

What I loved most about this story was the relationship between Jonty and Orlando. They are so sweet together. I also loved the fact that I did not know who the murderer was until just before the end.

Where does Lessons in Love rank among all the audiobooks you’ve listened to so far?

What aspect of Phil Mayes’s performance would you have changed?

Nothing really it was good

Who was the most memorable character of Lessons in Love and why?

They all had things I liked about them

I wasn't the biggest fan of this book, but the plot is good, and the voiceover was smooth. I would read it again, and I'm happy I gave it a chance.
I was given this free copy, in return for my unbiased review

Oh dear, how do I put this. the reader has a rich, lovely voice, but uses a sing-song lilt that sounds exactly as if he were reading aloud a Winnie-the-Pooh tale. With every line of dialogue I had to replay it in my head with a more appropriate intonation (a young Adrien Brody as Coppersmith, in case you were wondering). But mostly the images in my head were Christopher Robin and Pooh, which was not at all enjoyable, especially during the love scenes.

The story is really charming, and I will get the next book in text.

"Proper" 1900's love story, mystery, and reflection of the times. It took a chapter or two to become enthralled, and I'm very glad I stayed with it. This is one of the most enjoyable books I've read/listened to this year. The narration was flawless. If you liked the subtleties and charm of Brideshead Revisted you will enjoy this book. It's my first by this author and I can't wait to read more. I'm going to book 2 in this series now.

kind of figured out the killer early one, but the motive very clear..I thought it was a heart wrenching book when you take a close look..

the relationship is slow going, I'm thinking because we have so many book in the series..

I love this series, AND Phil Mayes' rendition!

Actually, I only have a string of exclamation marks and praise words for this audio. I have read the whole of the series, and keep following both the author, and the Cambridge Fellows. This audio is a delight in and of itself, as I have already re-listened to it several times. Please, just please, keep recording the series' other volumes! Every time I finish this one, I keep hoping Audible is going to offer me the next book to listen, but it has been futile hope as yet. What I like about Mr Mayes' performance, is very pleasant accent, different 'voices' of the two characters, no overdoing 'emotional' speech, very smooth overall, and it really creates the effect of presence, of being eye witness to what's going on in the story. I look forward to more books in the series, wherr there are more 'voices' to recreate, and important female characters to come to life too. Hope Mr Mayes is up to the challenge. I would really enjoy it to be his renditions too, if any.

The story was pretty interesting but I had a difficult time getting into the narration. I like Phil Mayes, but it just didn’t seems to fit for me this time.

Such brilliant writing and captivating story. The characters are funny and eloquently brilliant. Loved it!

Sweet, interesting. Voices were a little off.

I have an overall positive reaction to the book and I'm glad I listened to it. We glimpse into the life of post doctoral fellows in Edwardian Cambridge University, St. Bride College.
There are the undergraduate "dunderheads" as mathematics teacher Dr. Coppersmith calls them, the Master of the college and porters. Meals, coffee and drinks are rituals and one's seat at table is reserved.
The characters are the best part, Dr. Jonty Stewart and Dr. Orlando Coppersmith: Jonty is relaxed, messy and not concerned with keeping a stiff upper lip, 180 degrees different than the uptight, fastidious Orlando. Orlando is a product of parenting by a most dour couple and has no experience in love, let alone loving touch or sex.
Add murder to this environment to create a rich novel of gay love despite disapprobation and danger. It's a good read.

The narration uses childish voices alternating with the overstern tones from the very same characters. I felt the characters were oversimplified this way.

I'll be reading or listening to the sequels!