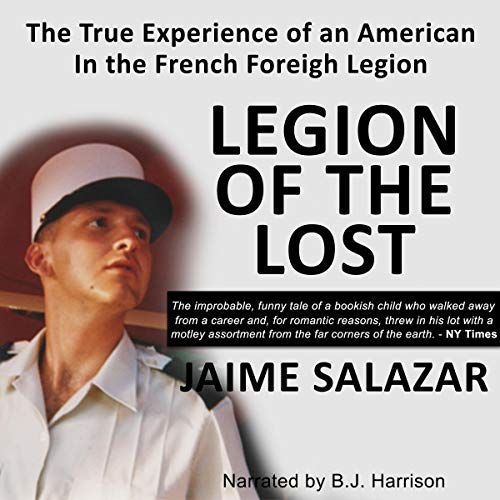 Legion of the Lost

"From an air-conditioned Chicago office, Mr. Salazar took the express elevator straight to hell. Legion of the Lost is his story, the improbable, very funny tale of a sensitive, bookish child of Mexican immigrants who walked away from a promising career and, for romantic reasons, threw in his lot with a motley assortment of thugs, drunks, drug abusers, and desperate refugees from the far corners of the earth. And those are the ones giving orders." (New York Times)

King Louis Philippe II created the Foreign Legion in 1831 as a way to rid France of penniless immigrants and others considered a liability to the French establishment. The Foreign Legion still exists today as an elite army of modern mercenaries from around the world, in the service of la France.

Considered a haven for the dregs of society, joining the Foreign Legion was rumored to be simple, but it wasn't. Getting out of the Foreign Legion, as Salazar soon realized, proved impossible. So what was an engineering professional doing in the Legion of the Damned? For those Dostoevsky calls the "insulted and the injured," men of character who seek adventure in the most obscure places, the Legion offers refuge. After surrendering his passport, and with it, any human rights, the Legion gave Salazar a new name and life.

Even after finishing four months of what the Legion calls instruction, Salazar realized that his existence wasn't like that of Gary Cooper in Beau Geste. It was more a primitive life of beatings, marches, fanatical discipline, and sadistic NCOs. Idealists looking for a new beginning come to the Legion, but only the toughest, and cruelest are left to wear the Legion headdress, the képi blanc.

Once enlisted, there are three ways to leave the Legion: Finishing one's five-year contract, disability, or leaving in a box. While serving a term in Legion prison, Salazar came up with a fourth solution - escape.

This is my honest opinion, as a 30 year old boy-man I'm interested in joining the french foreign legion. This book has taught me much there is to know about the life of a Legionnaire told by Jamie. I thaught his story was close to as honest as he could tell it but his story is about his time spent not in combat but as a soldier and the struggles he faced while training and Leisurs and the life of not the average legionnaire but an American who had a rough time. I think its most honest to tell his story as it was not easy for him in the legion. he's telling his story about how rough I was for him and how he regrets leaving but couldn't handle the soldiering it took to be there in peace time. no war, no real hardship just got sick of it.

Good start, but loses me towards the end

A decent start. I found the protagonist at first to be somewhat relatable as I too have thought about giving up my life in tech for some adventure. However, it would have been a better story if the protagonist could eat his pride every once in a while.

As the book nears the back half, it feels like it's been written by a teenager who wants to prove to you that he's "really cool".

I feel the author would have benefitted from reducing his ego a bit.

Meh, it was OK

It was OK but not really worth a credit to listen to. Not a legion story I'd recommend.

At times interesting, but overall disappointing.

I still think the book has potential, but overall it was a little on the plotting side. I was disappointed especially by the ending as I had assumed this was a book about a person's career history with the legionnaires the only at the end found that it was far short of a career, which for me at least took away much significance from the buck and the author story.

An exceptionally eye opening story that pulls back the curtain of the legion legend and forces you to see it for what it really is with cold steely eyes!

One of the few books I read cover to cover. Even better in audio

I bought this book back in 2006 cover to cover I couldn’t put it down. I don’t know what happened to be my copy but it popped in my head again recently and I was pleased to see on audible. The detail and imagery is very good it feels like I was right there. This man has traveled the road less traveled especially by Americans. You should go down it with him.