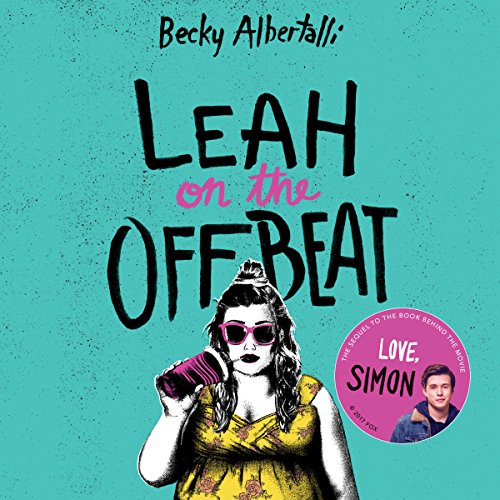 Leah on the Offbeat

In this sequel to the acclaimed Simon vs. the Homo Sapiens Agenda - now a major motion picture, Love, Simon - we follow Simon’s BFF Leah as she grapples with changing friendships, first love, and senior year angst.

When it comes to drumming, Leah Burke is usually on beat - but real life isn’t always so rhythmic.

She’s an anomaly in her friend group: the only child of a young, single mom, and her life is decidedly less privileged. She loves to draw but is too self-conscious to show it. And even though her mom knows she’s bisexual, she hasn’t mustered the courage to tell her friends - not even her openly gay BFF, Simon.

So Leah really doesn’t know what to do when her rock-solid friend group starts to fracture in unexpected ways. With prom and college on the horizon, tensions are running high.

It’s hard for Leah to strike the right note while the people she loves are fighting - especially when she realizes she might love one of them more than she ever intended.

Plus don't miss Yes No Maybe So, Becky Albertalli's and Aisha Saeed's heartwarming and hilarious new novel, coming in 2020!

"Narrator Shannon Purser proves to be a great match for the wry, anxious, funny, self-deprecating, snarky, and longing inner voice of Leah... Her whiplashing emotions are always front and center for the listener, which feels endearing, exhausting, and relatable." (AudioFile)

I’ve been waiting months for LEAH! Was not disappointed

This was an incredible sequel and I loved every minute of it!!! The book was beyond expectations and it was my fav out of all 3 Simonverse books!! Leah is an amazing character and I am proud of her character development and I’m so happy that this book was made!!!! THANK YOU SO MUCH BECKY FOR WRITING QUEER CHARACTERS!!! IT MAKES ME FEEL VALID!!!!!

Fan Service for the Simonverse

I picked this up because I loved "Simon vs. the Homo Sapiens Agenda". If you haven't read that one, or seen the movie "Love, Simon", I would definitely recommend checking either or both of those out before starting this book. I guess, technically you could read this book without those, but it's good to know the history of this universe before diving in to Leah.

Right of the bat, I will say I was not a fan of the narrator's voice. I don't know if the author meant for Leah to sound stuffed up with a lisp, but that's what you'll be listening to for 7 hours. Maybe I'm just being critical because I LOVED the narrator for the Simon book. I mean, I guess it kind of suits the Leah character, but I just didn't find it as pleasant to listen to for an extended period of time.

The story itself it pretty good. You get to go on this modern coming of age journey with Leah where she is forced to deal with her sexuality, friendships, relationships, life plans after high school, etc. I thought focusing on Leah was a peculiar choice though. After reading the Simon book, I definitely felt that Leah was not focused on very much compared to the other characters in the "Simonverse" and I didn't find her particularly that interesting as a character anyway. Was that an intentional set up for focusing the sequel on her?

I think I enjoyed the Simon book better as a whole, not just for the superior narration, but probably because Simon was just a more likable character to follow. Leah is your typical angsty teenager with a sarcastic a surly wit. I found myself becoming very frustrated with her character during the course of this story because I felt like she over-complicated things due to her surly and angsty demeanor.

I will say, this book, like the Simon book, has excellent dialog and despite being frustrated with Leah, I was entertained and engaged the whole time. If you were a fan of the characters from the Simon book, you will enjoy this story as it picks up at the following school year. You get to find out how everything panned out and learn more about a character that didn't get much of the spotlight in the previous book. Overall, I would recommend this for any fan of the "Simonverse" and/or anyone looking for a dramady style LGBTQ Young Adult book.

Not something you are expecting

Umm this book kinda ruins my impression from the Simon book...It kinda makes me hate some of the characters. And it makes me feel sick of continue listening. I have read Albertalli's other books and I love those, just not this one.

A little bit of a let down.

Leah on the Offbeat was fairly enjoyable listen. It wasn't as good as I hoped- Leah was more irritating than I expected. I did have to remind myself she was a teenager, dealing with a lot of teenage angst, but she seemed angry a lot of times at nothing really. She did seem to grow a little as the story progressed, which was nice to see.
I liked that Ms. Albertalli didn't wrap things all up in a pretty bow at the end- that would have been way too unrealistic, considering the nature of these characters.
It was nice to see the diversity in this story, and I'm sure it will resonate with a lot of teens.
And I loved seeing more of Simon and Bram, they were just as precious as always!

Shannon was a good choice for the narrator, in that she sounded like a teen. I do wish she had done a better job of differentiating the voices- at times it was hard to tell who was supposed to be speaking. While she didn't just "read" the book, she didn't do much to give each character their own voice, even the males.

We already know that Leah is this super self-conscious and stubborn teen girl from 'Simon vs. the Homo Sapiens Agenda'. In this book, her POV just made the thoughts and struggles ever so clear and real that sometimes I feel like 'how could you' and also 'I totally get it' at the same time.
'Leah on the Offbeat' audiobook is really cute and beautiful, and as much a cliché as a teen's story, it is very enjoyable. Very.
Shannon's narration made all the emotions so raw and reactions so alive. I might not enjoy the story so much if I were only to read it. Through her voice, I morphed into Leah and my stomach flutters so bad whenever Leah does. I feel I am in love....

Loved this cute continuation of Creekwood
Becky writes with such deep feelings. All the teenage angst and emotion.

My only issue is the references to Harry Potter and although made before JKR publicly admitted to being Transphobic detract from the book because everytime I hear a HP reference I recoil for my disgust with JKR especially having to hear it in a LGBT book.

Amazing Just AMAZING. Loved it so much. Yeah YEAh

Great story and narrator, but the story was slow to begin and picked up a few chapters in.

Not my first time and definitely not the last

This is my favourite book. I've listen to it more times than I can count. And it won't be the last time either. I love Leah Burke, and I love Shannon Purser, the perfect narrator.

I LOVE Becky Albertalli normally and was so excited to read this that I jumped on it as soon as the audio book was out. I was excited for more characters I loved and an expansion of a world and story that felt real to me. I was excited for representation of a bisexual far musician as I am all of these things and no fat girls are never main characters normally. Unfortunately, my excitement is where my positive feelings for this book end. Leah is angry at the world for seemingly no reason at all. Simon and other characters I previously adored felt like paper thin versions of themselves. Everyone acted so out of character from previous novels and it felt forced and like Albertalli simply needed to meet a publisher deadline. Given the plot of Simon, I longed for Leah to have a positive coming out on her own terms, but that doesn’t happen. This is Albertalli’s WORST book in my opinion.

I love Leah and her squad

Her struggle to find her identity and accepting that she is talented (and doesn't need to be perfect) is so heart warming.
Her story feels so close to me - and the voice who tells it is like an embrace.