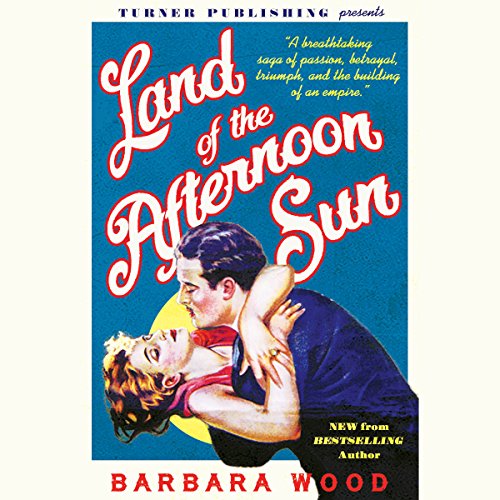 Land of the Afternoon Sun

Land of the Afternoon Sun

New York Times best-selling author Barbara Wood's latest novel follows a disinherited English baron and a young New York heiress who marry and move west to build an agricultural empire in Palm Springs in the 1920s, when it was just a budding town on the edge of the Mojave Desert. It's a saga about ambition on both large and small scales and the rapidly modernizing world as the harsh, sun-drenched landscape transforms from a Native American haven to the playground of Hollywood's rich and famous.

Land of the Afternoon Sun is also the story of a woman finding her own personality and strength in the West against a breathtaking desert landscape that changes constantly and shows its deadly side in poisonous snakes, flash floods, and sandstorms, with dramatic moments of forbidden romance, reversals, treachery, betrayal, and, ultimately, triumphs.

another great read by Barbara Wood

another great story by Barbara Wood that i can so visualize under the right direction on the big screen in an epic movie. my only issue without ruining the ending for anyone was the demise pf 2 of the major characters was a bit anticlimactic. as far as the narration, the narrator was very good but sometimes her tone made me felt like she was reading​ me a childrens bedtime story lol. But i find that true of most of the narrators that perform the readings for BW's books. Either way i thoroughly enjoyed it. My favorites by BW are still Blessing Stone and Domina. If you enjoyed this book then definitely read/listen to either or both of those as well!

History of Justice & Romance Abide Together

Again my favorite author, Barbara Wood, tells a compelling story of the hard work and commitment it took to create a movement of Justice for not only the environment but the combined efforts of the people who lived on the land in the western part of the US in its early days and continues to ripple out for all today who benefit from our ancestors dedication.