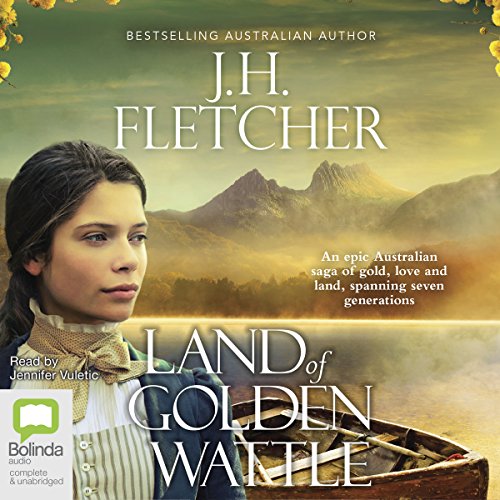 The memorable and gutsy heroines of J. H. Fletcher's Land of Golden Wattle take us on a journey through Australian history.

1826, Van Diemen's Land. When her father dies in a duel, 17-year-old Emma Tregellas is left with limited funds and at the mercy of her odious guardian. Faced with the prospect of being forced into marriage with a man she detests, she enlists the help of her true love, Ephraim Dark, who assists her to escape to faraway Van Diemen's Land. Here she seeks sanctuary with her wealthy uncle, Barnsley Tregellas.

1982, Tasmania. The union of Bec Hampton and Jonathan, heir to the fabulously wealthy Penrose estate, brought promise of reconciliation to two warring sides of the same family: a dynasty that had its foundations laid by Emma Tregellas and Ephraim Dark nearly a 100 years earlier. Defying opposition from Jonathan's formidable grandmother, Bec had gained control of Derwent, the agricultural empire that the family had built from the early days of white settlement. Now 85, Bec's dearest wish is that her granddaughter Tamara should inherit the property, but Giles, her dissolute son, has other ideas. Will Bec and Tamara succeed in defeating Giles' plans, or will control of Derwent pass irrevocably out of the family?

This majestic historical drama spans seven generations of an often-divided Australian family. With them we experience many of the traumatic events of Australia's history: the early days of white settlement, the gold rush, the cataclysm of two world wars and the Great Depression.

This book is a wonderful story spanning generations weaving an interesting tale of what strong women can accomplish.