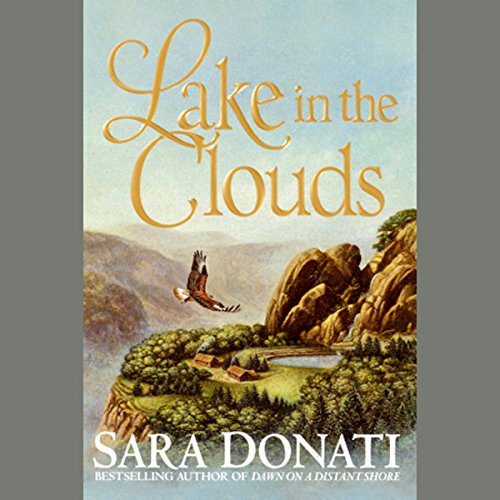 Lake in the Clouds

Lake in the Clouds

In her extraordinary novels Into the Wilderness and Dawn on a Distant Shore, award-winning writer Sara Donati deftly captured the vast, untamed wilderness of late-18th-century New York and the trials and triumphs of the Bonner family. Now Donati takes on a new and often overlooked chapter in our nation's past - and in the life of the spirited Bonners - as their oldest daughter, the brave and beautiful Hannah, comes of age with a challenge that will change her forever. Masterfully told, this passionate story is a moving tribute to a resilient, adventurous family and a people poised at the brink of a new century.

It is the spring of 1802, and the village of Paradise is still reeling from the typhoid epidemic of the previous summer. Elizabeth and Nathaniel Bonner have lost their two-year-old son, Hannah's half brother Robbie, but they struggle on as always: the men in the forests, the twins Lily and Daniel in Elizabeth's school, and Hannah as a doctor in training, apprenticed to Richard Todd. Hannah is descended from healers on both sides - one Scots grandmother and one Mohawk - and her reputation as a skilled healer in her own right is growing.

After a long night spent attending to a birth, Elizabeth and Hannah encounter an escaped slave hiding on the mountain. She calls herself Selah Voyager, and she is looking for Curiosity Freeman - a former slave herself, one of the village's wisest women and Elizabeth's closest friend. The Bonners take Selah, desperately ill, to Lake in the Clouds to care for her, and with that simple act they are drawn into the secret life that Curiosity and Galileo Freeman and their grown children have been leading for almost 10 years. The Bonners will do what they must to protect the Freemans, just as Hannah will protect her patient, who presents more than one kind of challenge. For a bounty hunter is afoot - Hannah's childhood friend and first love, Liam Kirby.

This book was not as good as the others in the series. Even so it's better than most other books plus the narrator keeps me coming back.

In this series I would say I enjoyed the first two more, but honestly I think its because I went into it just after (and I mean just, like minutes after) reading The Winter Rose (from The Tea Rose series which is also fantastic!). This book was very good and I did enjoy it. There was a lot about slavery, medical issues, specifically smallpox, and New York. This author does a great job of taking history and putting it to fiction so we can get a good image of the times. I never realized how the smallpox vaccine came about and its crazy to me how they harvested and gave it!
It was nice to see Hannah growing into a woman, but I relate to her as a mother so I was glad, really glad, that the author kept her intimate scenes to a bare minimum. Lol. I always enjoy continuing to know characters from the previous books and there were plenty. I do wish that Hannah and Liam could have been a couole though! Maybe in the next book? Oops.. Is that a spolier? If so, sorry.

Overall it was a wonderful contribution to the series and after I get through a couple other books in line before it, I look back to getting on to the next book.

Where does Lake in the Clouds rank among all the audiobooks you’ve listened to so far?

If you enjoy old fashioned romance this book is for you.

The relationship with the two main characters.

Would you be willing to try another one of Kate Reading’s performances?

This is the 3rd book of the series and Im so glad that I listened to it. It fully brings all the family back together as all the characters of the previous books are blended in. I almost felt like
a member of the community. I've learned to appreciate that time period in history and what life was really like for all involved from these
books.
I'm not sure I'll purchase the next 2 books for
taking my 2 credits for so many months has limited
my variety of choices. I felt this book had a good enough ending for me to imagine their futures
and feel satisfied without running the series in the ground.

Love the book but Audible's prices are too high.

I am listening to this series and I love it. I'm very frustrated that Audible's "member price" is still on average $10 higher than Barnes and Noble. I have emailed them about the huge difference in cost to it's members but have gotten no reply. I am looking forward to Fire Across the Sky but again - will I pay $10 more or use TWO credits - probably not.

once again a great story

So Disappointed! Quit after the first and save time and $!

Ugh! What a shame. This novel had potential. The characters are very well done and the narrator is brilliant but this story drags on and on... Over written and the addition of too many sub characters not related to the storyline creates a tedious listening process.
Skip all but the first in the series. Trust me when I say that nothing interesting continues for these characters after the first novel.
The first novel of the series is fairly well written and I enjoyed listening but I found it difficult, boring and frustrating to finish the rest of the anthology. I forced myself to finish the second and then I foolishly wasted credits and a great deal of time listening to the others, hoping that the series would improve. It gets worse as the stories continue not better.
Wasted potential. Shame on the editing team! Historically correct fascinating time in American History poorly edited. At least 1/3 of each book is wasted on blah blah blah.

with every series it just gets better

I don't know why people compare this series to Outlander because there is nothing to compare. This story builds even better as it goes along with strong women and some weak one to contrast but progresses past Elizabeth and Nathaniel with their children. u gave up on Outlander at the fourth installment. Couldn't endure one more story with their bratty kids. I actually look forward to the next installment instead of dreading it. Glad that there is less of the mushy love scenes. pardon me as I must download and start the next book. Surprisingly enjoyable series with all the wonderful historical tidbits.

So far this is my favorite book in this series; compelling all the way through, characters so finely drawn and relatable. The story is actually better for not having to stop every five minutes so the main characters can have sex. I didn’t realize until the author’s end notes how much actual history I was learning.

I always want to see more of Runs From Bears, though, he’s one of my favorites. 🙂

Cant wait to listen to the next in the series.

I am so enjoying this series and am sad that I am crossing the halfway point. I feel as though I have been living at Lake in the Clouds and Paradise the last few days and cannot download the next book in the series fast enough! I can't wait to see what happens next!