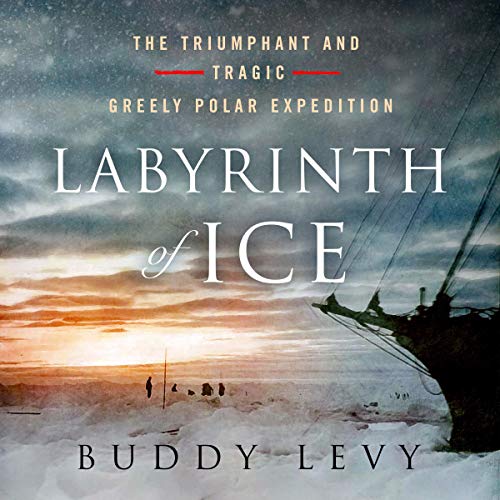 "Listen to this if you want to hear a narrator at the top of his game recount a fascinating - and at times disturbing - true story of adventure, disaster, discovery, cannibalism, and more. Will Damron makes Levy's fascinating account of the Greely (Polar) Expedition come to life.... This is a harrowing adventure story and a great listen." (AudioFile Magazine)

Based on the author's exhaustive research, the incredible true story of the Greely Expedition, one of the most harrowing adventures in the annals of polar exploration.

In July 1881, Lt. A. W. Greely and his crew of 24 scientists and explorers were bound for the last region unmarked on global maps. Their goal: Farthest North. What would follow was one of the most extraordinary and terrible voyages ever made.

Greely and his men confronted every possible challenge - vicious wolves, sub-zero temperatures, and months of total darkness - as they set about exploring one of the most remote, unrelenting environments on the planet. In May 1882, they broke the 300-year-old record, and returned to camp to eagerly await the resupply ship scheduled to return at the end of the year. Only nothing came.

Two hundred fifty miles south, a wall of ice prevented any rescue from reaching them. Provisions thinned and a second winter descended. Back home, Greely’s wife worked tirelessly against government resistance to rally a rescue mission.

Months passed, and Greely made a drastic choice: He and his men loaded the remaining provisions and tools onto their five small boats, and pushed off into the treacherous waters. After just two weeks, dangerous floes surrounded them. Now, new dangers awaited: insanity, threats of mutiny, and cannibalism. As food dwindled and the men weakened, Greely's expedition clung desperately to life.

Labyrinth of Ice tells the true story of the heroic lives and deaths of these voyagers hell-bent on fame and fortune - at any cost - and how their journey changed the world.

Praise for Labyrinth of Ice:

"Polar exploration is utter madness. It is the insistence of life where life shouldn’t exist. And so, Labyrinth of Ice shows you exactly what happens when the unstoppable meets the unmovable. Buddy Levy outdoes himself here. The details and story are magnificent." (Brad Meltzer, New York Time best-selling author of The First Conspiracy)

"An engaging, superbly written, and meticulously researched chronicle of the Greely expedition that proves it is one of the most engaging adventure narratives ever. With cinematic prose, great economy of language, and vivid descriptions, Levy places readers in the middle of the action.... More than a nonfiction book about an expedition, Labyrinth of Ice reads like an outstanding script for an action movie." (NPR)

I will never complain about being cold or hungry again after reading this book. The journey Greely and his men endured is described wonderfully in this book and gives an incredible insight into the hardships the men faced. I finished the book in 3 days and I have never finished a book in that time.

The limits of human will power, amazing story!

Buddy, you have a new fan after this one! A well presented tale, I loved it, couldn’t put it down. This story is so outlandish one could confuse it with the unrealistic plot of some BS Hollywood flick. But no, it’s a true story that has it all, hero’s, scandal, love, human extremes, and great storytelling, by Buddy!

This will be a book I revisit!

A well written account of heroism that most people have never heard. Read extremely well. It reads like an action movie.

The story started out a little slow, but hang in there because it gets very interesting after a few chapters. And listen all the way through the epilogue where it explains how the information gathered is the basis for much of today’s weather science.

Political Pitch for the Cult of Global Warming

Overly dramatized attempt to exonerate one of the Army's most inept officers. I too was a combat arms Army officer of 25 years. If I had stupidly insisted on a "plan" that caused 75% of my soldiers to starve and freeze to death, and absolutely needlessly at that, I would have spent the rest of my life in military prison....or shot by firing squad. But Greely gets a complete pass because of his political connections combined with the gross incompetence of Army leadership in those days. Ultimately, what could have been an extremely engaging historical account, nearly enticed me to regurgitate my lunch at the very end with its unabashed and groundless praise to the Climate Change cult dogma. Strange.

If you want to know in depth details of this expedition including some sad and triumphant endings, this book is for you.

Lt. Greeley and abt. 24 other men go on an expedition to the northwest coast of Greenland in 1881. They were there to take all sorts of meteorology readings and to try to get farther north than any other previous expeditions. They made themselves a shelter and insulated it with blocks of snow/ice around the outside. These men lived there for two years! Imagine in 1881-1882 what that must have been like in weather at -50f! They had food provisions with them plus they hunted and did very well other than the long, darkness of winter. No sun for months played on their physique like is would anyone.
After these two years, a supply ship was to have already have come to replenish their food but none had come. Per previous commands, they packed up and via ship and whale boats they went south. The ship got stuck and they ended up having to travel over 500 miles on foot or by whale boat or sleds. They had to leave all their sled dogs behind in their original camp.
This book is all about survival. How LT. Greely kept control of all his men, kept compassion towards them in difficult situations, how he became more open minded and how this group of men became a band of brothers in order to survive.
More than half die before a rescue ship finally reaches them in the third year.
I would give the overall 5 stars except a few places in the middle kind of seemed to lose my interest some. I did really enjoy this book and listened to it in just about 5 days before going to sleep at night. This last night was so gripping, I couldn’t fall asleep!

A life worth writing about!

Heard about this book on the Meateater podcast and had to get it immediately! Great story, very well written and read! I enjoyed it very much and it certainly puts my daily struggles in perspective. Thanks! Now I'm on to more books by Buddy Levy....

Stop reading reviews and read the book already!! Every word you read here could be a word you read of this tragic and triumph tale.

This book capture my full attention from start to finish. An amazing true story of courage, fear, heartbreak,hope tragedy and an unbelievable will to survive. I read about this expedition over 30 years ago and have never forgotten the struggle that these men endured. I very much enjoyed reading it from another authors perspective. This is a piece of American history that everyone should read. It will leave you with a true understanding of what hardships early American explorers had to endure.