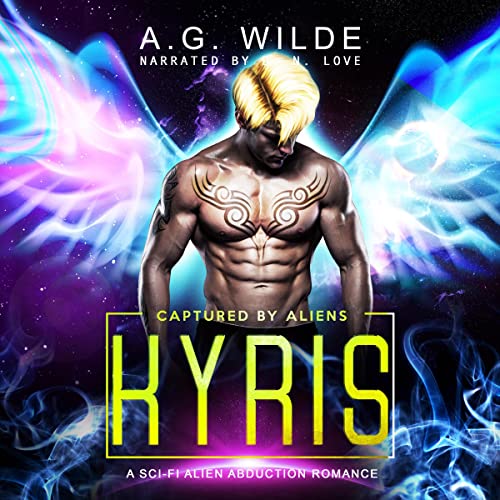 What do you do when falling in love makes you a deviant?

After fighting with his brothers to rescue five human females, the one thing on Kyris’ mind is getting the single human he’s protecting to safety.

His sole purpose is to reach the outpost on a harsh, desert planet so she can be extracted.

His whole aim is to complete his mission...except, that’s a lie.

Never had he found interest in any of the captives...until now.

He shouldn’t want to claim her. His feelings toward her are sinful...deviant. It is not the way of his people.

Except, everything within him says he should take this small, strange being and make her his own.

Now he’s not only fighting the monsters outside, but the monster growing within.

Kyris is a stand-alone listen with a guaranteed happily ever after and a possessive alpha male. There is no forced mating between the hero and heroine and no cliff-hanger.

If you like heroes who pull on your heartstrings and make you teary-eyed, get a copy of Kyris today!

I wasn’t too crazy about this book in the series. But for the sake of finishing this overall amazing series, I listened. The heroine just didn’t do it for me. She wasn’t really a heroine. She was more like a helpless damsel in distress. She had a little character growth, but she just seemed too whiny. I found myself either rolling my eyes or wanting to scream at her to do something instead of cry. With that said… I did enjoy the moments of humor and actually caught myself chuckling out loud. And, I love how Wilde ties each book together to create a bigger more intricate picture without using half a book to layout the situation and map.

I really liked this audio book! it had something that I've always wondered about! the heroine always seemed to perfect, like never having to go to the bathroom or such, but she got her period! I'm glad that this book kind of brought real life in the story! a great read, but something us ladies have to deal with and having to explain to a hot alien guy of what's going on! so funny! loved the story!

This one had some plot holes in it but it was still good. If I was to say what the plot is missing I would give away the book and I don’t want to do that. However, even with the holes it was still a really good book. These two took a lot longer to get to know each other. As they were in prisoner together and stranded on muck together. So they got to know each other. This allowed for less misunderstanding as with different cultures this is going to happen no matter what. I just wish the plot for this book wasn’t used the author could have taken it a different way and explained his world and hers better to each other.
3.5 stars though give this series a shot it’s worth it and it has spin offs that are really good too!
~My Book Obsession Approved~

In the 7th chapter and its constant whining monolog. Didnt care for this book. I liked the others though.

I have read all of the books in the Captured By Aliens series and Kyris has probably been my least favorite. This was a slow burn with great chemistry between the couple. Some of the action scenes got to be a little monotonous and I lost interest. That’s why I gave the story three starts. The narrator did a good job. She has good voice normally and does well when doing the male voices as well. Overall I give this four stars.

Another enjoyable story in this series

This book in the series has dIfferent characters with different internal struggles who need to traverse across Muk while fighting sand nesters. Song is a young sheltered woman who was abducted, is overwhelmed by the strangeness and continued conflicts while being insecure about Kyris protecting and ensuring her survival. The story is as much about Kyris’s and Song’s budding relationship, as they trek to the Muk outpost, as it is about Song learning how she is strong.

Listening to a romance was new for me.

The narration took a while to get used to. It was not bad at all.