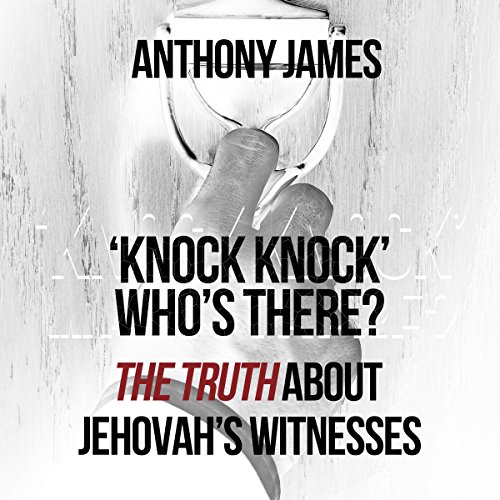 'Knock Knock' Who's There?: 'The Truth' About Jehovah's Witnesses

'Knock Knock' Who's There?: 'The Truth' About Jehovah's Witnesses

This is the story of a young man who was raised as a Jehovah's Witness, seemingly destined to spend the rest of his life following the instruction of God's "Spirit Directed Organization". He soon came to discover, however, that things were not as they had first seemed. Following a patch of doubt and subsequent in-depth investigation into the religion, the young man began to realize that the things he had previously accepted without question no longer made sense. His eyes were opened to the various powerful methods that were, and still are, being used to control the minds of the faith's followers.

The story contained in this audiobook describes the author's life, from his upbringing as a Jehovah's Witness, his struggles along the way, and the challenges he faced as he tried to break free. His extensive research into the religion's history is also documented, including apparent accounts of questionable teachings and manipulative methodologies.

This is a very clear and easy to follow compilation of things that can be very confusing to some but obviously clear to a true seeker of truth. I found my own story here in many examples and came to similar questions that were left hanging on weak answers during my own separation journey that began 50 years ago. A must read for anyone who has the courage to expect the truth.

I don't know where to begin

I enjoyed your book. I am sure many others feel as the book was an account of our own experience as Jehovah's witnesses. It is refreshing to know others have taken a step to leave, but not only to leave in haste, instead to do so with the purpose of finding knowledge. If we leave only to remain in ignorance we would have accomplished nothing. Thank you for sharing. For my part I have taken a similar approach as you. It has been lonely and full of struggles but I am happy with the knowledge that I now posses and continue to gain from a world full of information and wonder. Continue the great work. Thank you "brother"

I really enjoyed this book. I felt it gave a thought provoking look into a religion that isn't well know. I am not a Jehovah's Witness but have been learning about the religion (a hobby of mine) and his observations and research are right in line with some of the finer points I have come across and questioned. Over all it is well researched and thought provoking.

I like the narration but be forewarned that it does have a text book feel.

Sadly, it seems, thst all too often after leaving the cult of Jehovah's Witnesses, ones seem to adopt Atheistic, New age, or even Cultism. I was raised in what they wrongly refer to as the truth and can attest that it is very difficult and heartbreaking to leave, and then even more difficult to unravel the years of lies and indoctrination, it may seem better to just turn your back in the whole belief of God and the bible and this may well be the intent. However, I assure you, God is most certainly REAL and ALIVE, he loves you more then you can ever fully understand he wants more than anything for you to believe in him and receive his 'free' gift. The best advice I can offer and I do mean 'best', is that you pray to GOD and ask him to fogive you of you sins, and ask Jesus to literally come into your life, to unravel the lies that you have believed for so long and reveal the truth of his word he will. John 3:16 GOD loves you so much! Revalation 1:17-18 Jesus is God John 3:3 You must be born again Romans 10:9-10. How to become saved Much love to you on your difficult journey ahead, there is much more to know, if I can help please reach out to me, I would be very grateful for the opportunity to help you find the truth and be set free from the greatest lie you've ever been told. 🙏🙏🙏 Rick hulre@yahoo.com

at first I was sceptical about how good this audiobook was going to be, and wow I am extremely glad that I purchased it. Highly recommend it! Especially if you used to be part of that organization and want to learn about the bullet you dodged.

So many parts of the authors experience mirriored my own as I finally made my way out of that group. It's a great relief to know that I wasn't alone in it, and yet infuriating to know that others have suffered as I had. Your in depth research on the true history of them have helped me close the book on that part of my life. Thank you!

Wasn’t crazy about the reader, but the book was excellent

I wasn’t crazy about the narrator (his speech patterns were too much like William Shatner), but the book itself was excellent. It was well organized and factual.