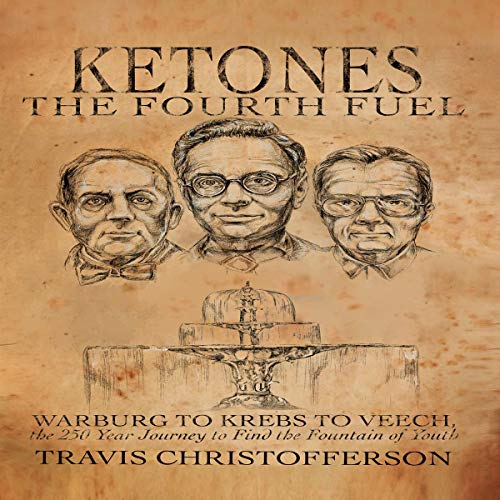 In Ketones: The Fourth Fuel, science writer Travis Christofferson weaves a fascinating narrative of humanity's quest to understand how our bodies produce energy - transporting us on a scientific expedition from the past to the present - across early modern Europe to modern laboratories spanning the globe.

The listener is taken on a riveting and revelatory journey that follows Nobel Prize-winning scientists from the 19th and 20th centuries as they map the pathways and cycles that comprise human metabolism. The listener is left with a new and lasting appreciation for the silent chemical motion that keeps us alive and healthy. Ultimately, the narrative arrives at a remarkable discovery that rewrites everything we thought we knew about metabolism - with profound therapeutic consequences.

Coming back to the present, Christofferson reminds us that Americans are sicker than they have ever been. Heart disease, cancer, dementia, obesity and type 2 diabetes are rapidly becoming the norm. Yet, we are presented with a revelation: the realization that we all have a potent, easy-to-access hybrid metabolism that generates a different fuel - the fourth fuel - that “supercharges” our metabolism in a way that slows aging and bypasses the metabolic dysfunction that leads to the multitude of diseases that plague modern society.

I loved this book. Lots of great information on the history of Ketosis. just makes me mad how long we have known this info and yet the world is still suffering metabolically!

If you’ve read all the Gary Taubes stuff, it’s hard to imagine he did not cover this material. Super informative. If you like science and science that makes sense, this is an awesome book!

Excellent historical review of Giants in the field of cellular metabolism and the discovery of ketones and how they have been used to improve metabolic health. This book adds to a deeper appreciation and understanding for those interested in low carb lifestyle. Abosolitely loved it!