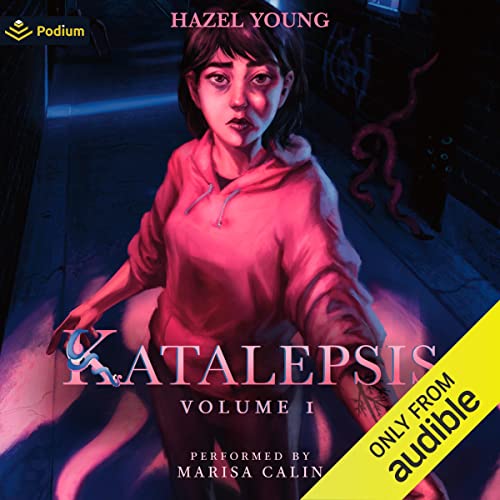 Heather Morell is haunted. Otherworldly nightmares and monstrous hallucinations lurk around every corner, relics of childhood bereavement and schizophrenia.

Until she meets Evelyn and Raine—a bad-tempered mage and her self-proclaimed bodyguard—and learns that she’s not insane after all.

The monsters she sees are all too real, the god-thing in her nightmares is teaching her the secrets of creation, and her twin sister—the lost girl who supposedly never existed—might still be clinging on, a dwindling soul somewhere beyond the walls of reality, Outside.

Heather plunges into a world of eldritch magic and fanatic cultists, trying to stay alive, stay sane, and deal with her own blossoming attraction to dangerous women. But being ‘In The Know’ isn’t all terror and madness. Sometimes the monsters wear fancy dresses and stick around for afternoon tea. Sometimes she finds more in common with them than she expects. Perhaps this new world is Heather’s chance to be more than a defeated husk of human wreckage.

And perhaps, out there on the far-flung rim of reality, she can find a way to bring her twin sister back from the dead.

I loved the book and the narrator is phenomenal! The length was perfect and I can’t wait to continue the series.

I've been following this story online for a while now (full disclosure: I'm a Patreon supporter). As much as I enjoyed - and continue to enjoy - the written version, this performance develops the horror aspect of 'eldritch horror' beautifully. It, like all good performances, brings the whole thing to life in the best ways possible. Gives enough depth to the characters to make them jump.

I can't recommend it enough. Nor the source material. Give katalepsis.net a try...and join the rest of us breathlessly waiting for each Saturday to roll around for a new chapter.

Heather learning how to harness her label of schizophrenia into the monster world. Great tale of forming friendships.

Exactly what I was hoping for

fantastic, narrator really captures the voices for each of the characters, highly recommend for anyone who likes queer women, cosmic horror, or both.

One of the most unique books I've ever read

I truly love the concept and plot of this story. Young explores several genres of horror all wrapped into one character driven tale. After listening to the audiobook, I did start reading further on the author's website, and I truly believe the story actually get even better.

My biggest critique of the audiobook is the narrator. While she absolutely nails dialogue and character voices, I find her general narration a little odd and sing-songy, which I think is a strange choice for a horror novel.

The overall book also has a slight issue with pacing, which I think is a result of it's original incarnation as a web serial. This was most obvious at the end of the book when the tale seems to stop a little abruptly.

The fact that this book is so character driven is my absolutely favorite piece of this creepy tale. The viewpoint character, Heather, always makes decisions informed my her own experiences which ensures a truly organic feel to the plot.

Of course, my two favorite things about the story in general are Heather's character growth and the romance! I think it's rare to have such well written horror and romance in one book.

Overall, I recommend the book! I think some people like me might find the narrator ti be an odd choice, but the plot is such a delight that it's easy to overlook.

Halloween purchase I was not the audience for

Well written for the YA horror genre. This one had to much in common with YA romance for me with the awkward TSTL troubled teen MC