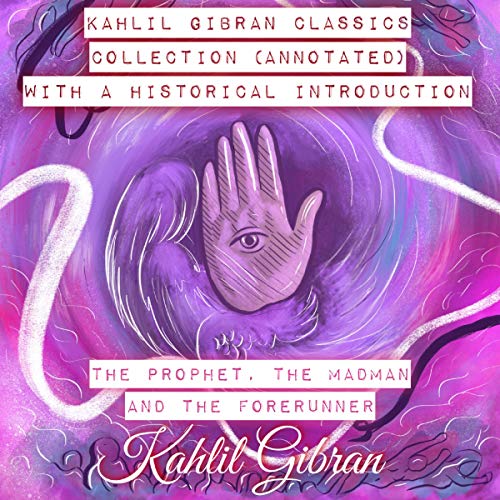 Kahlil Gibran Classics Collection with a Historical Introduction: The Prophet, The Madman, and The Forerunner

Unique to this collection is:

You may, of course, skip all of it and go straight to the titles if you do not want any spoilers and come back later to the beginning.

Educated in Lebanon, United States, and France, Gibran was influenced by the European modernists of the late 19th century, but even more by Francis Marrash, who introduced poetic prose and prose poetry in the Arab world. Gibran's style of writing and ideas he wrote about are believed to have been greatly influenced by Marrash, particularly the concept of universal love.

Gibran's early work was based on short stories, poems, and prose poems, and the recurring theme of his work was the experiences and loneliness of Middle Eastern immigrants in the New World. He also studied art in Paris, and most of his books are illustrated with his own drawings. His legacy includes more than 700 paintings and drawings, which are kept in the Arab Museum of Modern Art in Doha, as well as in the Gibran Museum in Lebanon.

He published 35 books of prose and poetry, the best known of which are: The Prophet, The Madman, and The Forerunner.

The books in this collection include The Prophet, The Madman, and The Forerunner.

sometimes you know when someone has tapped into a higher realm of understanding and although the madman and forerunner soared far above my head, the prophet resonated in ways I don't have words to classify.

the narration wasn't flawless, but it worked. this collection had the best value for the price and I am thankful to have heard it. it's worth hearing, that's for sure.

thank you kahlil for your expression! thank you Jim for your time and talent.

Wish i passed but at least its short. But it reads like the quran or bible.

Gibran is a bit preachy for my tastes but this is a well read and well presented collection to give the student, or the curious, a taste for the works of a pivotal character in modern literature.

Another good addition from these producers,

This is the first book I’ve read/listened to by this author. I’ve had a paper copy of the book The Prophet for many years and never read it. I’ll admit, I’ve not even finished this rendition yet. I’m writing the review early. I really like the addition of the historical context at the beginning.

This is the fourth book I’ve listened to by this narrator ( Jim D Johnston ). For The Prophet, his style did not let me forget I was being read to. The characters dialogue was not read in a natural spoken manner, but instead broken with pauses in uncommon places. The audio quality was good.

Always wanted to read this

Listening to this great work is a bit more challenging than reading it, I imagine, but I have thoroughly enjoyed listening to it. Thanks to the producers for putting Kahlil Gibran's work in audio form! The narrator has a pleasant voice and uses good inflection to perform the book. I was given this free review copy audiobook at my request and have voluntarily left this review.

I found this to be a good collection of pieces from Gibran.Jim D Johnston was a fair to good narrator,sounding more preacher that just a reader.I was given this free review copy audiobook at my request and have voluntarily left this review.'

Nice Rendition on a Classic

I received this audiobook free at my request, and am leaving this review voluntarily.

I really enjoyed the historical overview, as it gave me a lot of information that I didn't already know. The narration at first didn't seem right to me, but the further I got into the book, it didn't seem to bother me so much. Overall, I enjoyed having these three texts combined into this one audiobook. Gibran is perhaps one of the most quotable authors to me, and this audiobook was enjoyable to listen to.

The narrorator doesn't seem to match the text

I love Kahil Gibran. His writing is lyrical, magical, and profound. His writing is the sort that one can re-read at different stages of one's life and get different things out of it -- all of them meaningful. I was so excited to recieve a copy of this as an audiobook, because poetry recited often adds a new dimension to the work.

However ... the narration lacks something. The narrator is skilled, but his voice does not match the text, in my opinion. His is not the voice I would have chosen to narrate this work.

Gibran for the ears

I have been a reader of The Prophet since high school and thought it would be wonderful to have it on audio. It was interesting to have a brief biography as well as the other two. As for the narrator, he'd make a great WELS pastor or professor.
I was given a free review copy at my request and this is how I honestly feel about it.

A beautiful presentation of the very well known The Prophet, as well as the Madman and The Forerunner.
I found the short historical biography and explanation regarding Khalil Gibran who died at a relatively young age very interesting.
This is an audiobook that could be listened to over several times to get the full meaning of each story. Some parts reminded me of Aesop Fable, teaching a lesson...reflecting on what is love.
Well worth the listen..so well narrated with feeling, pace and tone.