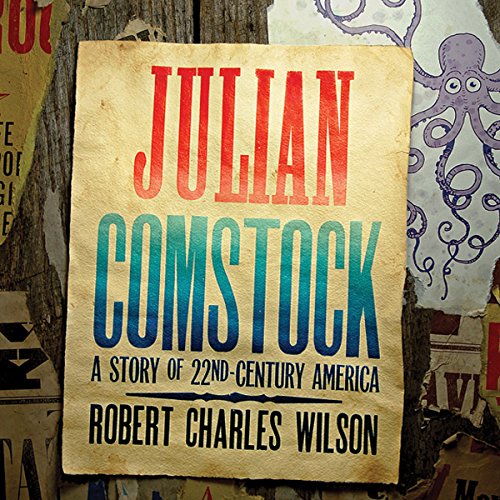 In the reign of President Deklan Comstock, a reborn United States is struggling back to prosperity. Over a century after the Efflorescence of Oil, after the Fall of the Cities, after the Plague of Infertility, after the False Tribulation, after the days of the Pious Presidents, the 60 stars and thirteen stripes wave from the plains of Athabaska to the national capital in New York City.

In Colorado Springs, the Dominion sees to the nation's spiritual needs. In Labrador, the Army wages war on the Dutch. America, unified, is rising once again.

Then, out of Labrador come tales of a new Ajax - Captain Commongold, the Youthful Hero of the Saguenay. The ordinary people follow his adventures in the popular press. The Army adores him. The President is...troubled. Especially when the dashing Captain turns out to be his nephew Julian, son of the falsely accused and executed Bryce.

Treachery and intrigue dog Julian's footsteps. Hair's-breadth escapes and daring rescues fill his days. Stern resolve and tender sentiment dice for Julian's soul, while his admiration for the works of the Secular Ancients, and his adherence to the evolutionary doctrines of the heretical Darwin, set him at fatal odds with the hierarchy of the Dominion. Plague and fire swirl around the Presidential palace when at last he arrives with the acclamation of the mob.

If Jules Verne had read Karl Marx, then sat down to write The Decline and Fall of the Roman Empire, he still wouldn't have matched the invention and exuberance of Robert Charles Wilson's Julian Comstock. As told by Julian's best friend and faithful companion, a rustic yet observant lad from the west, this tale of the 22nd Century asks - and answers - the age-old question: "Do you want to tell the truth, or do you want to tell a story?"

Julian Comstock is an unusual story for science fiction, a 16th century tragedy, presented in a 19th century style, set in the 22nd century. It's also a first person account written by a friend of the title character, which has the consequence of leaving much about Julian, and about the world in which the story is set, unexplained. If you're looking for an uplifting adventure story, or a geeky exposition on post-collapse technology, you might look elsewhere. But if you like a good story, beautifully told, check this one out. Although the stories and characters are quite different, the tone reminded me a bit of The Great Gatsby, particularly Fitzgerald's last line: "So we beat on, boats against the current, borne back ceaselessly into the past." The narration is very well done, though a bit melancholic, but it fits the nature of the tale. Like a previous reviewer, I really didn't want this one to end.

This was my first Robert Charles Wilson novel, and I can tell that his strength is in characterization and dialogue. The setting reminded me of Orson Scott Card's THE TALES OF ALVIN MAKER series in that it is a 19th century setting but a post apocolyptic idea without the doom and gloom of THE ROAD. Wilson's characters are well drawn with desires and motivations that are universal. Julian Comstock would have been my pick for the HUGO award.

The book jumps forward two hundred years to a world transformed by catastrophe into a 17th century-like landscape. An interesting idea, but the story is decidedly weak and the ending (most of the book) is both predictable and very disappointing. Scott Brick is usually a good narator, but here he slows down and introduces so much dramatic voice that it interferes and extends a story (maybe he was trying to save an otherwise mediocre book). Not as good as the author's "Spin" by a long stretch.

I'm not even done and hope it wont end

I love reading and listening to the classics of the 19th century because I love the english of that era.
This story feels like a classic. Its hard to shut off and I love the characters.
Scott Brick could read a shopping list and make it sound good

How did I stick with this??

I love speculative fiction, and the premise intrigued me. I tried reading it some time ago but was put off by the narration. At loose ends for a book, I decided to give it another try. I tried to ignore the narrator and focus on the story, but that didn't help much. The main character was fatuous and so lacking in the ability to make inferences that I was frequently frustrated by the author's depiction of him. The characters all lacked depth.

Has Julian Comstock turned you off from other books in this genre?

No, but I'll do more research on unfamiliar authors and narrators before making selections, based on this experience.

Would you be willing to try another one of Scott Brick’s performances?

Absolutely not. His performance was the most melodramatic attempt at pomposity I have ever experienced.

I was disappointed, but felt I should read to the end so my review would be based on a complete reading.

This is the first book of dozens I've downloaded from Audible that has been disappointing to this degree. Nothing has come anywhere near this close.

Can't believe this won a Hugo, Not for sci-fi fans

Chapter to chapter, paragraph to paragraph, almost every aspect of this book left me asking "ok.. but why?". The character development is good, except that these are just copies of Wilson's other characters in a new setting. This story has nothing much to do with technology, and isn't even really steampunk. It's set in the future and some past apocalypse is hinted at, but it might as well actually be set in the past. The novel advances no big ideas, which will be incredibly disappointing to sci-fi fans who wanted MORE after a taste of the author's incredible Spin series. In fact it doesn't even advance any mediocre ideas.. it just kind of beats you over the head with a shallow and completely unexamined atheism, and repetitive and tedious nods at enlightenment principles and basic Darwinism. (I think that for readers of speculative fiction, it's kind of a given that the audience will love a philosopher king more than a backwards and tyrannical pope figure. So if we're going to discuss equality, rationality, and literacy I wish we would *actually discuss it* instead of just mentioning it, but the author apparently has nothing fresh to say.) Then suddenly a giraffe appears! And the main character is a cinema buff and wants to write a musical. You can finish this if you're not expecting much and you have a long drive or something, but it's just incredibly pointless and rambling.

The concept of the story is very interesting, but the prose is tedious and distracting.

Masterful Writing, Not My Genre

Robert Charles Wilson is one of the best writers. I love the way he writes and this is wonderfully written. It just is not my cup of tea.

Thought is was a bit far fetched

The timeline of the book was to short. The book started too close to the current time for such a drastic change in society. The author tried to make some justifications but it felt more like a fictional built story from the American Revolution.

I really liked what I had read about this book, and although I love long, detailed books, and have enjoyed many varied futuristic envisionings, this is one of only 1 or 2 audiobooks I've ever had that I couldn't force myself to listen to til the end--I almost made it, but found I couldn't care less what happened--that boring. And the narrator absolutely drove me crazy with his weird, melancholoy style--usually I can get past the narrator if I am interested in the book, but I just couldn't tune this guy out.