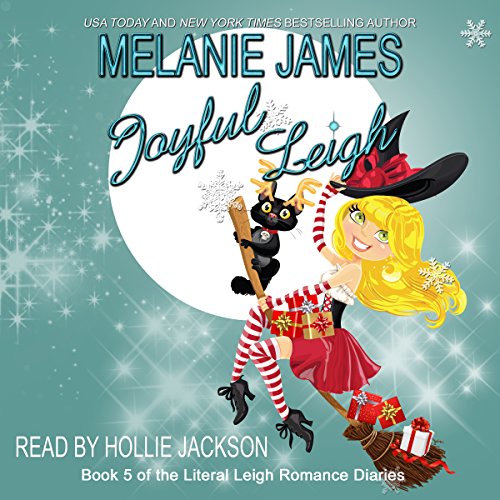 'Tis the season for magical mayhem. Leigh vows upon her magic desk and witch's broom that Thankshanukkamas will be filled with childlike joy for her, her family, and her friends - even if it kills them. And it may just come to that! With a new publishing contract in hand, the disaster pieces fly from Leigh's desk. With titles like Sleighing the Elfa - The Elf Pack Book 1, Restoring the Old Schlitt House - A "Do Yourself" Romance, Fangin' the Billion-were, and Gangin' the Billion-were, the mischief piles up.

When the EPA (Elf Protection Agency) shows up at Leigh's door, she's got some explaining to do. Throw in a couple of retired mobsters, Fur-Con, bats in the belfry, and a shape-shifting witch and you've got a recipe for catastrophe. Can Leigh and the gang save the fate of all paranormals? Or will this be the end of the line for Leigh and her band of magical misfits?

So I listened to these books just because Hollie Jackson is so good. I don’t really like Leigh. I like the other characters though and gertie especially. The stories are ok and sometimes a little funny, nothing super amazing but not bad either.

Leigh you have some splainin to do

Would you listen to Joyful Leigh again? Why?

I would absolutely listen to any and everyone one of Melanie James books over and over again! They are some of the funnies books out there!

What was one of the most memorable moments of Joyful Leigh?

If you have read any of Melanie's Leigh books you will know every part of the book is memorable! You read it and laugh the entire time and you can not just forget it!

Have you listened to any of Hollie Jackson’s other performances before? How does this one compare?

We have gone over this Audible! LOL I LOVE Hollie and if anyone reads any of my reviews you will find this out very quickly! Hollie is amazing and talented!

Can't say nothing more then I LOVE THIS SERIES

What made the experience of listening to Joyful Leigh the most enjoyable?

Laughing out loud when you hear the words and being able to visualize what is happening...

I love all of them... Because each is very unique in their own great way....

Laugh till it hurts

What more can I say... This is one of my favorite series to read and definitely listen to over and over again...

perfect end to a great series!

What did you love best about Joyful Leigh?

I loved how the ending made me feel satisfied and happy for Leigh and Hunter.

What was one of the most memorable moments of Joyful Leigh?

The hilarious scene at the Furry convention when the entire cast of characters experienced all kinds of misshap and adventure.

She's great with the characters and all the accents. It really makes the story come alive.

I can not wait for more of these. I love this series!!! Melanie James has definitely not disappointed me on any of these. I laughed so hard on chapter 8 I had to replay it for my husband. And we both we're ROFL. I love the different voices by Hollie as well!!

If you could sum up Joyful Leigh in three words, what would they be?

Leigh is someone you can always count on to give you a chuckle. She gets these ideas... They never work out the way she expects.

Hollie brings the story to life. She makes the characters so animated,

Yes, and it is possible with the length of this book.

This is the last book in the Literal Leigh series and is just as entertaining as the previous books.

I love, love, love this series! Leigh has so many mishaps! Johnny Nipples and Hamster Dick are added characters that make the book hilariously awesome!

What other book might you compare Joyful Leigh to and why?

Any book in the Literal Leigh series is great.

Hollie Jackson did an amazing job narrating. She captures the character's personality perfectly.

A feel good, laugh your socks off holiday romance.

I love this series by Melanie James. Every book is better than the last and always puts a smile on your face.

What did you love best about Joyful Leigh?

What's not to love? Gertie and Leigh are hilarious together add in the others and OMG butt gusting funny.

In this book I am going to say Hunter. He get stuck in a cat suit and Oh my I laughed so hard.

I have read the book and Hollie Jackson is wonderful with all her different voice adjustments in certain areas of the story brings it to life and makes it even funnier.

When Leigh and Gertie are in the store and there is a holdup. How they handled this situation was really good. Also when Hunter gets stuck in the cat suit how they define things about him is truly funny.

I highly recommend you listen to this audible book its truly hilarious. A make you feel good inside story.