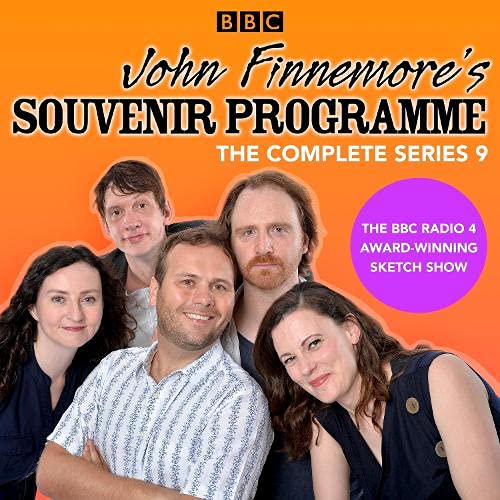 John Finnemore returns with his multi-award-winning sketch show, but this series is very different to the previous eight. There are still sketches and songs, and it's still written and performed by him and his usual fantastic ensemble cast - but with no live studio audience, John has taken the opportunity to try something new.

Each episode in this series of Souvenir Programme consists of scenes from one person's life, played in reverse order. There's no narrative as such - it's still a sketch show - but as we follow the characters back in time, from lockdown Zoom calls to childhood birthdays and funerals, the individual sketches link up to form an overall picture, portraying the sprawling history of an entire multi-generational family.

And, as if that wasn't enough, there are also some terrific tall tales, a paean of praise and a truly unforgettable earworm....

Clever, complex, hilarious and poignant, these Souvenir Programmes with a twist star Lawry Lewin as Russ, Margaret Cabourn-Smith as Deborah, Simon Kane as Jerry, Carrie Quinlan as Vanessa and John Finnemore as Newt.

Written and performed by John Finnemore

Recorded and edited by Rich Evans at Syncbox Post

"One of our best sketch writers." (Observer)

Out of the norm for this show, but needs must

Series 9, recorded without a live audience and with a socially distanced cast, took quite a different turn than the previous eight series; however, it still shares quite a bit of DNA with series 1-8 while borrowing a tonal shift from Double Acts. Instead of entirely unrelated sketches, we're treated to selected snapshots of the lives of several generations of a family, and listeners are rewarded with references to other sketches hidden throughout the entire series. The departure from the normal format due to COVID lockdown is likely the culprit for the low ratings, and while this certainly is a departure, it's no less a quality programme. People who enjoy this series will almost certainly enjoy the afore mentioned John Finnemore's Double Acts (and vice-versa).

It's prequels all the way down

Well, not really, but it's important to read the blurb that briefly explains how each skit is a slice-of-life of a character initially introduced in the first Zoom group, and each slice-of-life goes backwards in time to another slice-of-life in that person's lifetime, and then backwards again, and again.

We see how others in that group intersect that person's life.
Later we go back in time with someone else in that group.

Then, at the end, we are back in the present, at the Zoom call, and suddenly we see everyone with their life story, and understand the ritual/joke and the ties that bind.

This had the feel of the Double Acts vignettes, but the structure and some Easter Egg type references to Souvenir Programmes past skit elements. Those connections made me smile.

Since I already have a habit of multiple listens of good writing, this will be fun to unpack over more listens. Because there are too many details to absorb with just one listen.

Loved every season of this so far. Not sure what happened this time? Maybe I’m just too slow-witted - but just didn’t get the first 3 episodes and didn’t bother listening beyond.

I love John Finnemore's stuff. Souvenir Programme, Cabin Pressure, Double Acts but I struggled with this one. I just don't get it.

... that spans through several decades including Corona times. This Souvenir Programme is a bit different to the other seasons as it tell the story of one family and its members through the struggles and moments of happiness. It features a wonderful soundtrack (with a really memorable wonderful song) and givesv surprising and beautiful context to one of the series' most memorable characters.

John Finnemore is so good in combining hilarious stories and sketches with enormous heart and even a bit of melancholy here and there that made me shed a little tear here and there.

Its so well thought out and I'm staying vague here for a reason because I don't wanna spoil this beautiful onion of a story and its many layers. For sure this is one to listen to several times!