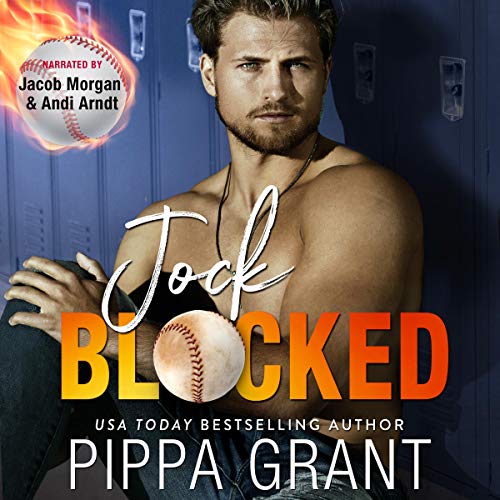 Call it superstition, but when a guy bats as hot as Brooks Elliott, you don’t mess with what’s working. And what’s working is him keeping his pants zipped and doing all of his scoring on the field.

So when I hear he’s planning to ditch his V-card now that he’s been traded to baseball’s lovable losers - a.k.a. my home team and my reason for living every March through October - I do what any rational, dedicated, obsessed fan would do.

I make a plan to stop him.

But the thing about stopping him is that it requires spending time with him.

And the more time I spend with him, the more I like him. Not as the guy who’s going to help save my favorite team and finally bring home a championship ring, but as the guy who’s helping me in my quest to bring back the team’s old mascot. Who also loves making pancake and bacon sandwiches. And who would do almost anything for his love of the game.

But after all this time of jock blocking him…do I even have a chance?

And if I do, are we both destined to a life of celibacy in the name of winning?

Jock Blocked is a home run of a feel-good romantic comedy featuring the world’s most superstitious sports fan, baseball’s oldest virgin hero, a rogue meatball, an adorable puppy with a cussing problem, and the best lovable losers. It stands alone and comes with a happily ever after more satisfying than a game-winning grand slam.

In this crazy world we are living in today with all the sadness that surrounds us, this book bring happiness and so much laughter!!! I haven’t laughed so hard in a long time. Thank you Pippa!!! The narration was PERFECTION my 2 favorite Andi & Jacob!!!

Soooo worth the money!!!!

Best. Book. Ever!!! I love all of Pippa Grant’s
books, but this book is special! I snort laughed all the way through it! I know people beside me at stop lights thought I was having seizures. Andi Arndt and Jacob Morgan are two of my favorites and they outdid themselves!!! Loved this book!!! Thank you Pippa Grant!!!!

What did I just pay for?

I found this book:
Hard to follow
Not funny
Confusing
Odd ( fireballs, meatie )

Have your imagination ready for this one!

Yes this was fun !

Ok loved this book ! How do you break a curse?? Is there such a thing as meaning to superstitions? Well this fun fast paced story will try answer your questions . Brooks the sweet Ave hot baseball player is still a virgin ( why you ask well read or listen to the book lol ) Mackenzie is the teams biggest fan ! She was him to stay a virgin . Why ( see above reason ) add a puppy that likes to swear ( so funny ) and a couple of cross dressing dads and a group of friends and you have a great book

What a laugh a minute with this book. I highly recommend this book and all of the other fabulous books by the incredibly talented PIPPA GRANT. Brooks and Mackinsey are puurrffect together and Cocca Puffs the puppy is simply a star in training. So if laughter and baseball are your thing, then just buy this book.

This was too silly to enjoy. A fan girl tries to save the virginity of an adult male professional athlete all in the name of having a winning baseball team. The narrators were fantastic! However, this is not worth a credit.

I thought the story was a bit silly! I think they took superstitions way too far. As usual, Andy Arndt and Jacob Morgan were great.

Not often I read a book and can’t wait to finish it just so I can be done and never look at it again. This was unfortunately one of those books. The dialogue between the characters was all over the place at times and several times I wasn’t sure I understood what was actually happening. Maybe if I was a baseball fanatic it would have read better for me but sadly, that’s not the case. Love the narrators though!!

I snort laughed. I almost peed my pants. Read it!

“Okay, your next story has to have drag queens, an echidna, a virgin baseball player whose game depends on not popping his cherry, a dog with a collar that spews curses when the dog barks, and a crazy superstitious fan who steals a giant meatball. Got it? Go!”
This is how I imagine Pippa Grant’s stories get their hilarious story lines. I snort laughed all the way through this book. Another great story!

This one is freaking awesome! I laughed so many times listening to this book. Andi and Jacob are my two favorite narrators. They made this one come to life. I kept having to rewind a lot of the funny parts because I wanted to keep laughing.