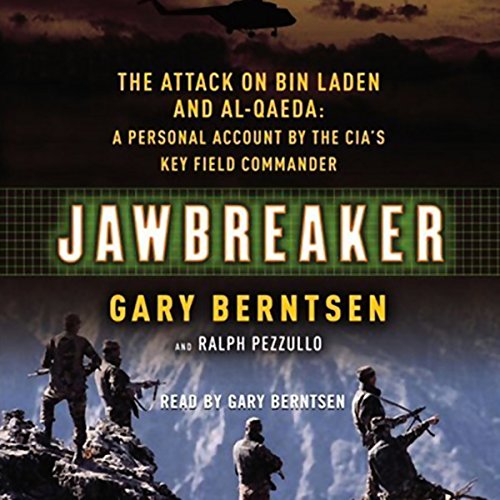 In Jawbreaker Gary Berntsen, until recently one of the CIA’s most decorated officers, comes out from under cover for the first time to describe his no-holds-barred pursuit of Osama bin Laden and al-Qaeda.

With his unique mix of clandestine knowledge and paramilitary training, Berntsen represents the new face of counterterrorism. Recognized within the agency for his aggressiveness, Berntsen, when dispatched to Afghanistan, made annihilating the enemy his job description.

As the CIA’s key commander coordinating the fight against the Taliban forces around Kabul, and the drive toward Tora Bora, Berntsen not only led dozens of CIA and Special Operations Forces, he also raised 2,000 Afghan fighters to aid in the hunt for bin Laden.

In this first-person account of that incredible pursuit, which actually began years earlier in an East Africa bombing investigation, Berntsen describes being ferried by rickety helicopter over the towering peaks of Afghanistan, sitting by General Tommy Franks’s side as heated negotiations were conducted with Northern Alliance generals, bargaining relentlessly with treacherous Afghan warlords and Taliban traitors, plotting to save hostages about to be used as pawns, calling in B-52 strikes on dug-in enemy units, and deploying a dizzying array of Special Forces teams in the pursuit of the world’s most wanted terrorist. Most crucially, Berntsen tells of cornering bin Laden in the Tora Bora mountains - and what happened when Berntsen begged Washington to block the al-Qaeda leader’s last avenue of escape.

As disturbingly eye-opening as it is adrenaline-charged, Jawbreaker races from CIA war rooms to diplomatic offices to mountaintop redoubts to paint a vivid portrait of a new kind of warfare, showing what can and should be done to deal a death blow to freedom’s enemies.

His eyebrow-raising style: “Most CIA Case Officers advanced their careers by recruiting sources and producing intelligence, I took a more grab-them-by-the-neck approach...I operated on the principle that it was easier to seek forgiveness than ask for approval. Take risks, but make sure you’re successful. Success, not good intentions, would determine my fate.”

Doing whatever it took: “I didn’t just want to survive: I wanted to annihilate the enemy. And I didn’t want to end up like one of my favorite historical characters - Alexander Burns...He was one of the first of more than 14,000 British soldiers to be wiped out by the Afghans in the First Afghan War. Like Burns before me, I was also an intelligence officer and spoke Persian. This was my second trip into Afghanistan, too. The difference, I told myself, was that Burns had been a gentleman and I would do whatever it took to win.”

Dealing with a Taliban official who controlled American hostages: “Tell him that if he betrays me or loses the hostages I’ll spend every waking moment of my life hunting him down to kill him. Tell him I’m not like any American he has ever met.”

The capabilities of his Tora Bora spotter team: “Working nonstop, the four men directed strike after strike by B-1s, B-2s, and F-14s onto the al-Qaeda encampment with incredible precision. Somehow through the massive bureaucracy, thousands of miles of distance [and] reams of red tape...the U.S. had managed to place four of the most skilled men in the world above the motherlode of al-Qaeda, with a laser designator and communications system linked to the most potent air power in history…As I listened over our encrypted radio network, one word kept pounding in my head: revenge.”

"Jawbreaker is both a thrilling read and a timely reminder of why America needs a clandestine service." (James Dobbins, Director of International Security and Defense Policy, Rand Corporation; Former U.S. Special Envoy to Afghanistan)

This audio book had me rivited to my speakers - I learned so much about our actions in Afganistan and at the same time was amazed by the actions, firepower and just how close we came to capturing Bin Laden. Unfortunately, the CIA sensored REDACTED so many parts of the book - I felt teased. I am DYING for an uncencored revision.

Couldn't get comfortable with this book from the start. The "deleted" and "section deleted" parts start from the beginning and just never stop. It left me feeling like I was missing something throughout. Too annoying to even finish the book. Really disappointed. Too bad because I would imagine it was a pretty good story. If you want all your book without interruption I would recommend skipping this one.

I really enjoyed this book, although it would of been so much better if there had been less censorship by the CIA. The frustration of about the censorship was only heightened because there was information removed that I had already heard in other books or had already been published in the media.

Fantastic audiobook. This is a must listen if you want to get an understanding of events in the Middle East.
It's very unfortunate that the CIA felt was it necessary to take a censorship axe to what could be an excellent tool for educating listeners to recent historical events in a very troubled part of the globe.

this book downloaded itself

so this book is remotely added into my Audibles account in 2019 (I guess) and I thought how strange, but nothing new with Comcast and Akamai and the Pinney family hacking and listening to everything, as well as their Penn Hills Pa wannabe cowardly pathetic mafia
but 5 hours after this book downloaded itself I find out that my sisters husband jaw was broken in a bicycle accident where he got essentially run over, on purpose.
forward to shady side academy and the fbi please. this is not a joke, but legally for Audibles and Amazon, has lawyers drooling. you are getting sued

The smooth flow was interrupted too many times as to make it annoying. The book should have been redrafted to make for seamless reading before being launched on audible.

Even with the many redactions mandated by the CIA, this book is still enjoyable. The insider account is amazing!

I read this book over 10 years ago, and just re-read it. It’s just as informative and thrilling now as it was then.

loved the narrator! Among my favorites. Book is very hard to follow due to skipping and the word "deleted" is used very very heavily in place of phrases that were redacted

awesome book wish I could have read First in first but a commanding narrative from a guy who was there since Nairobi.