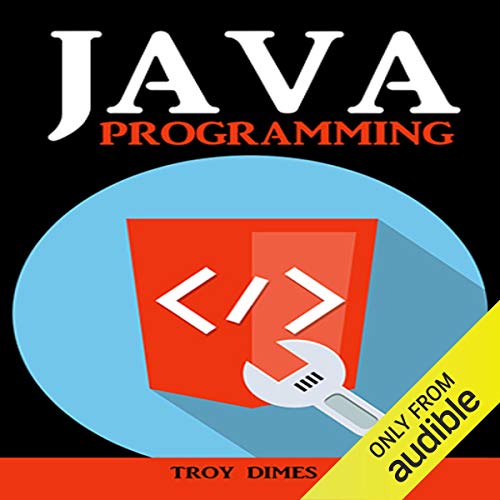 Learn one of the most widely used computer programming languages in existence today: Java. Once you learn how to program in Java you can create software applications that run on servers, desktop computers, tablets, phones, blu-ray players, and more. If you want to ensure your software behaves the same regardless of which operation system it runs on, then Java's "write once, run anywhere" philosophy is for you. Java was designed to be platform independent, allowing you to create applications that run on a variety of operating systems including Windows, Mac, Solaris, and Linux.

Great for beginning programmers or those that are new to the Java language.

A little sloppy on facts, very sloppy in narration

Another audiobook that seems to have fallen over when the author didn't get to check if the final product matched what he actually wrote.

The terminology was also sloppy. In assigning immediate constant values to defined variables, we see that we "stored three variables in the variables," for example. I need the confidence to know that the author is making an effort to use all the correct terminology, and is not, for example, using terms such as 'instruction,' 'command,' 'statement' and 'compiler directive,' or 'declaration' and 'definition,' as if they're interchangeable.

I love the concept. I could see the code in my head. But I kept having to rewind and wonder, "did he really just say 'public static void main CLOSE parenthesis?'" Yes, yes he did. And all that inSTAYtiation was very distracting.

Not as an audiobook!

This might be a great print book -- I have no idea. It's impossible to listen to. You'll be constantly read code blocks by what sounds like a text-to-voice synthesizer pronouncing every space, every "enter key" (new line), every character of every code block and snippet.

Within 20 minutes the gun will be in your hand and you'll be ready to commit suicide to make it stop.

I wish programming books could be made into audiobooks. This is an epic fail that illustrates why that doesn't seem to work.

They read the code examples!!!

They read the code examples! They don't talk about the different use cases for the different operations, they just give you what the java docs would tell you without any framing or situational scenarios to guide the readers understanding of the material.

Good beginner java guide. I needed something to listen to that would refresh my technical terms for an upcoming interviw and this worked well for Oop and very basic beginner knowledge on java.

useless to the max

Who needs an audio book where loooots of source is spelled?
bad bad bad! I hoped to get some theory about Java, methods() and stuff. why on earth does someone need to listen to code spelled sign by sign for minutes?