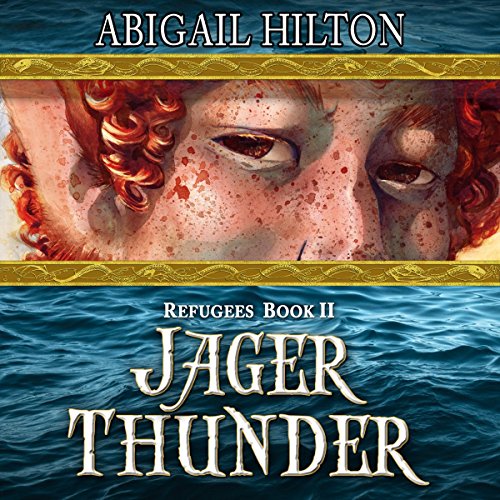 From the Author of The Guild of the Cowry Catchers:

While the crew of the Scarlet Albatross struggles to survive her harrowing voyage, Gerard is busy keeping his promise to his father. He and Silveo return to Holovarus for a brief farewell visit. However, chaos is threatening to overwhelm the Great Islands, and even little Holovarus will not be spared. Gerard's father and brother are facing difficult decisions, and they need help. Gerard feels torn between his old kingdom and his new family.

The situation only grows more complicated when the crew of the Scarlet Albatross limps into port, bringing old enemies and a child Silveo didn't know existed. Jager Thunder is a sequel to both The Scarlet Albatross and The Guild of the Cowry Catchers sagas.

High Tale of Fantacy and Steamy-punky

What a riveting tale of adventure, intrigue and politics. This book takes place as two distinct stories, yet they weave together perfectly.

The first part is suspended in the air in a flying ship, the second a political jostle for power.

I did not see it coming, and now I can't wait to see where it ends...

Thank you Abigail Hilton for another fabulous novel!

As a follow up to The Scarlet Albatross this book was wonderful.

As a way to round up the GoC characters and pull them in, I felt a little bit like everyone was making a cameo in everyone else's story and that I was having a hard time finding satisfaction- that is, until the plot really got off around the halfway mark. The book itself is wonderful, but I found I was impatient, so I would suggest that if you want the pay off, hold tight.

I struggled with the tie ins to the GoC series because of the voice acting and pacing. Abbie does a wonderful job selecting voice actors, and her production value is to notch. The writing was wonderful and spot on- but I struggled with wanting/waiting the 'end' resolution I could see coming, at about the half way point in the novel. For me, about the 3/4ths part of the book was when I was really invested and ready for it to get hella real. (Spoiler, I do love a good dinner party- blood and all)

Rish and Lauren do a wonderful job acting this out, but if you are coming from the full cast productions, I would recommend trying very hard not to compare their voices, respectively to those of Nathan Lowel, Chris lester, and Norm Sherman. Its odd to hear the 'voices' of characters that are essentially old friends change, but then again, these two do such a wonderful job of keeping the same vocal quality/mannerism that it comparisons don't mean a whole bunch.

All in all, a solid book and I am very excited to see what happens next!

Another great story from Abbie

Panamindorah is a fascinating world and continues to intrigue me. Abbie’s story telling style builds a rich world and deep characters. I really enjoyed how this story tied together previous stories and is setting the table for others. There is definitely an element of unpredictability that I enjoy with Abbie. As soon as I think I have things figured out, she surprises me with a new character or element to the story. I typically listen in the car, and I found myself sitting well after I had arrived, just to finish a part of the story.

My only criticism would be two narrators. Independently, both do a great job. I did struggle when the switch happened and would prefer the consistency of a single narrator. I felt like it would throw me out of the world and I had to adjust to the new narrator for a bit before I could settle back in. Minor nitpick, but enough that it bothered me when the switch happened.

I really enjoyed Jager Thunder. Best if you’ve already read The Prophet of Panamindora. The characters and places described so well you can almost see them. Great story filled with danger, excitement and even family intrigue. So many aspects of real life woven into a very colorful fantasy world. Keep up the good work. I’m looking forward to your next book. Loved it.

More swashbuckling and not just with weapons

Abby has successfully captured my attention yet again with this even paced return to the cowry catcher universe .
This story takes place at the turning of an age and there are enough elements ease that baton pass . Initially I was and sorta still am worried about what this change will mean for the feel of this adventure on the high seas that I have come to love but by the end you should feel excited to see .
This is queer positive series of books so if you are queer like me or just want more diversity in novels I'd invite you to check the whole series out .
The story is solid but raises some questions about how time is linked in the world ( prophet ) sorta lays he ground work for jager thunder in a cool way .
Abby continues to weave through multiple points of view and no one feels lost .

The hardest thing for me were the voices of older characters, I know the full voice cast is a lot however I really think it would have made the story feel more like the next step and not so brand new , but overall it's not the biggest thing to get over .
I can't wait for the next one

Would you consider the audio edition of Jager Thunder: A Story of Black Powder and Panamindorah: Refugees, Volume 2 to be better than the print version?

I didn't read the print version of this book, but the audio version was great! I really enjoyed the performances of Rich Outfield and Lauren Harris. I really liked the way the narration switched between Rich and Lauren based on the point-of-view of the chapter.

What other book might you compare Jager Thunder: A Story of Black Powder and Panamindorah: Refugees, Volume 2 to and why?

This book is set in the author's Panamindorah world along with the Guild of the Cowry Catchers and The Scarlet Albatross, so those are the most immediate comparisons. I highly recommend you start with those books before listening to this sequel. As for what these books are most comparable to, I'd say that if you enjoyed Watership Down, the Jungle Book, or even The Secret of Nimh, then you would enjoy these books. In addition to talking animals, they have quite a bit of political intrigue and nautical adventures.

Which character – as performed by Rish Outfield and Lauren Harris – was your favorite?

Silveo is always a favorite.

A fallen prince, torn between his old kingdom and his new family.

A worthy sequel, and top-notch narration.

Great Continuation of The World of Panahmindorah

Would you consider the audio edition of Jager Thunder: A Story of Black Powder and Panamindorah: Refugees, Volume 2 to be better than the print version?

The Audio Version is technically superior.... .If and Only If you were not spoiled by the full cast audio in Guild of the Cowry Catchers. As someone that has listened to the Guild of the Cowry Catchers more than 10 times without getting bored, the voices for each and every main character is Iconic. Hearing Gerard and Silveo in Jager Thunder.... It is missing the additional Charm of Norm Sherman's voice as Silveo and Nathan Lowell's deep but compassionate voice as Gerard... those are the voices I miss the most. Both narrators do a great job. I was admittedly taken aback by Gwain's voice which sounded very very close to the original.

I did notice however that Anaroo, Cpt. Acklebee... and really most of the Scarlet Albatross cast set in this book voices sounded less like them. Or perhaps the VA for them tried some different techniques?

Have you listened to any of Rish Outfield and Lauren Harris ’s other performances before? How does this one compare?

See above in the initial Question

I highly recommend all of Abigail Hilton's Panahmindorah books as well as Hunters Unlucky. They are all available here on audio. The Guild of the Cowry Catchers is a full cast production that definitely benefited from being edited together from its original Podiobook status.

Thank you for Writing the books Mrs. Hilton and thank you for having great friends and contacts to bring your characters to life past imagination.

Any of Abigail Hilton's books will always be wonderful!
This one brings more of the delight and depravity that encompasses her worlds.

My favorite fantasy author does it again!

Since first discovering Abby's spellbinding full cast Cowry Catchers I've devoured everything she's written. I've long waited for this and had the privilege of consuming some preview chapters she makes available to her Patreon subscribers. Thus was an instant buy for me as it continues the thrilling journey within the universe I love

Both narrators are fantastic and unlike some authors, Abby chooses these folks carefully. If you've read Scarlet Albatross, this is a slam dunk purchase from an author who really cares for and is actively engaged with her readers.

If possible, an even more thrilling follow-up to the "The Scarlet Albatross". Now also featuring your favourite characters from the "The Guild of the Cowry Catchers"!
You do not have to read “Cowry Catchers” before delving into the Refugees trilogy, but it is recommended if you enjoy character development and worldbuilding.

Before Refugees, I have ever heard an audiobook in which two different narrators handled the same characters, but they solved this one masterfully.
I think both Rish Outfield and Lauren Harris did great in keeping the tone for familiar characters.
Silveo’s husky sarcasm and Gerard’s earnestness carried over with new narrators. But they also must have collaborated on how to voice new characters, since these too were recognizable between them. Great job!

As I said in my review of “The Scarlet Albatross”: One of Abigail’s greatest strengths as a writer is how she weaves together several plotlines (that she ties up to my satisfaction) and keep her 20+ characters unique and believable throughout.
This is especially apparent in "Jager Thunder", which has an even larger cast of characters than perhaps any novel of hers to date.

I almost regret reading this before the trilogy was finished. This one had so many unexpected twists and turns, that I can only imagine how the last book, “The Cormorant”, will wrap things up.

In the meantime, I highly recommend the short story collections “When We Were Young” and “Before The Wind”, which deal with characters from both novels so far. Not only can Abigal write a mean novel, she is also highly skilled with short fiction!