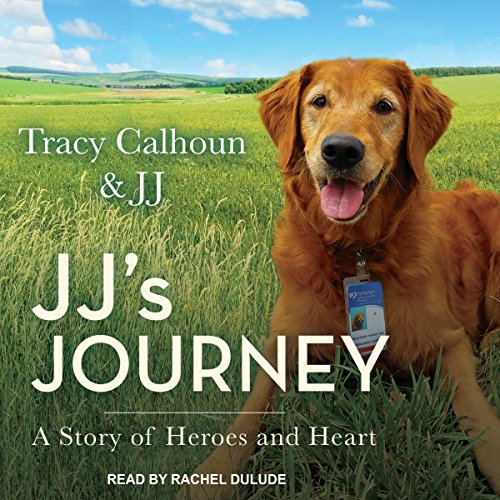 It was 2014 at Samaritan Evergreen Hospice House in Oregon, and a 90-year-old woman in a coma had been totally unresponsive for several days. The woman had no family or friends, and the staff expected she would pass very soon. Tracy, one of the nurses, went in to sit by her side during these final hours. While she was there, her dog, JJ, a staff "therapist", came to join her and hopped up on the bed. JJ snuggled up next to the elderly woman and nuzzled the woman's hand with her snout. And, the woman began stroking JJ's face. Somehow, JJ had reached her, wherever the woman was. Tracy was touched and quickly recorded it on her phone. In August 2015, that video went viral and has been seen tens of millions of times.

JJ's Journey is a heartwarming memoir of a nurse and her dog, and their combined efforts to bring peace and consolation to humans in times of crisis and grief. We learn about the work done at the hospice house and the different kinds of work a therapy dog does both inside and outside of hospitals. Rich with informative detail, we also learn the intricacies of training animals for this work, the complexities of recognizing whether the dog has the right personality, and how to engage their supportive spirit.

Initially I thought I wasn’t going to like it. It took a chapter or so to get into it. It ended up being really enjoyable & informative! We written & narrated.

Absolutely love JJ and this true story of her journey as a hospice therapy dog, helping patients and their families with love.

Filling in the blanks

I have been a follower of JJ (and her handler, Tracy) on her Facebook page after watching a dear friend go through the loss of her husband, where JJ’s comfort at the Evergreen Hospice House (where he passed) and daily antics through Facebook were a welcome experience. I quickly learned that there was so much more to JJ’s story, and that she, Tracy, and even Tellus (aka Wiggle Man) had more to share. Like many others, I was excited to hear of the book and waited anxiously for word that it had been released.

I knew Tracy worked exceptionally hard on the book. Her experience and passion shine through, and in doing so, you know that it must have been incredibly difficult to write at times. I enjoyed hearing stories of Callie, Dash, Gamine, JJ, Ottie, Taz, and others have come into picture. And even though Callie and Dash are no longer here on this Earth, JJ’s Journey helps us understand where JJ came from and what makes her so incredibly special.

Thank you, Tracy, for reaching beyond the short snippets Facebook encourages and proving all of us greater insight, not just for JJ’s Journey, but your own too, in what I hope will help many transform their understanding of hospice care and the influence of therapy animals in that environment.

I found this book to be all of the above, then some! Very well written, with thought and love. Thank you Tracy!