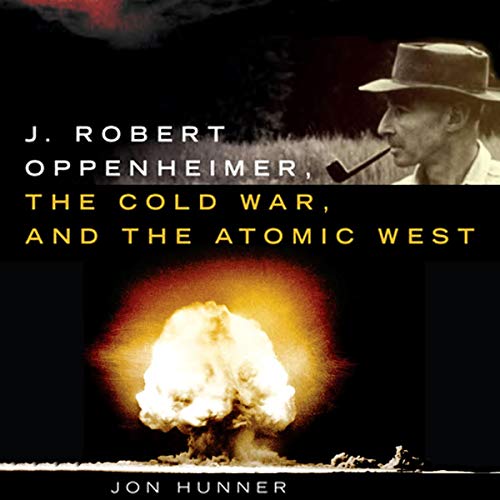 J. Robert Oppenheimer, the Cold War, and the Atomic West

J. Robert Oppenheimer, the Cold War, and the Atomic West

In 1922, the teenage son of a Jewish immigrant ventured from Manhattan to New Mexico for his health. It was the first of many trips to the Sangre de Cristo Mountains, a western retreat where J. Robert Oppenheimer would eventually hold path-breaking discussions with world-renowned scientists about atomic physics.

Oppenheimer came to feel at home in the American West, and while extensive studies have been made of the man, this is the first audiobook to explicitly link him with the region. J. Robert Oppenheimer, the Cold War, and the Atomic West explores how the West influenced Oppenheimer as a scientist and as a person, and the role he played in influencing it.

Jon Hunner’s concise account of Oppenheimer’s life and the emergence of an Atomic West distills a vast literature for students and general listeners. In this brisk, engaging biography, the author recounts how Oppenheimer helped locate the atomic weapons research lab at Los Alamos, New Mexico, and helped establish leading physics departments at the University of California - Berkeley and Caltech. By taking part in moving atomic physics west of the Mississippi, Oppenheimer bolstered the establishment of research labs, uranium mines, and nuclear reactors. He was also responsible for bringing in talented people and billions of dollars in federal contracts to the region.

Interwoven into this atomic tale are insights into the physicist’s troubled growing-up years, his marriage and family life, the bombing of Hiroshima and Nagasaki, and Oppenheimer’s eventual downfall. After the first atomic bomb burst over the New Mexican desert in 1945 and as the Cold War developed, the American myth of the Wild West expanded to encompass atomic sheriffs saving the world for democracy, even as powerful opponents began questioning Oppenheimer’s place in that story.