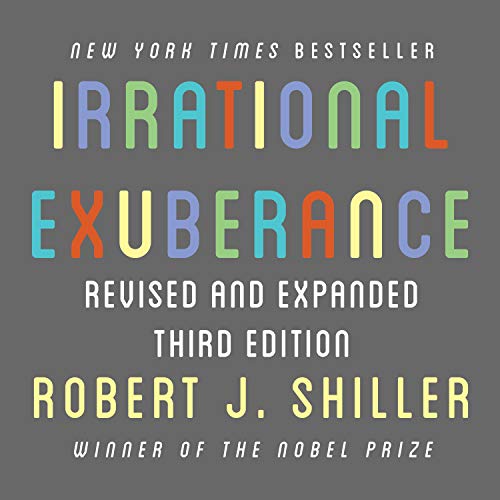 In this revised, updated, and expanded edition of his New York Times best seller, Nobel Prize-winning economist Robert Shiller, who warned of both the tech and housing bubbles, cautions that signs of irrational exuberance among investors have only increased since the 2008-9 financial crisis.

With high stock and bond prices and the rising cost of housing, the post-subprime boom may well turn out to be another illustration of Shiller's influential argument that psychologically driven volatility is an inherent characteristic of all asset markets. In other words, Irrational Exuberance is as relevant as ever. Previous editions covered the stock and housing markets - and famously predicted their crashes. This edition expands its coverage to include the bond market, so that the book now addresses all of the major investment markets. It also includes updated data throughout, as well as Shiller's 2013 Nobel Prize lecture, which places the book in broader context.

In addition to diagnosing the causes of asset bubbles, Irrational Exuberance recommends urgent policy changes to lessen their likelihood and severity - and suggests ways that individuals can decrease their risk before the next bubble bursts. No one whose future depends on a retirement account, a house, or other investments can afford not to listen to this book.

The audiobook is a good way to access this material during commute time or other opportunities where listening is easier than reading. The concepts are as important to consider today as they were 20 years ago, especially with the advent of meme stocks and cryptocurrencies where "animal spirits" are far more influential than fundamental value. It is helpful to understand that these behaviors are not new, but have been around since the beginnings of investing.

Robert Shiller makes a good case that the Strong Form of the Efficient Markets Hypothesis is misguided, and that even the Semi-strong and Weak forms have holes.

While it may be difficult to profit from the information, it is clear that markets have periods of excess optimism and excess pessimism that inflate or depress prices for extended periods. It almost seems that the periods of "rational" investing behavior are actually a transition state between periods of increasing optimism or pessimism.

Any serious investor should read this book.

This book talks a lot about historical economic and market data with mentions of charts in the book. However in the Audible version, there is no PDF accompaniment of the charts. Recommend to buy the paper version of this book instead and not audible book.

This is a very slow and laborious criticism of the Efficient Markets hypothesis, and of the ability for most to conveniently beat the market in spite of inefficient markets, and with a dash of why Real is more important than Nominal. Unfortunately most of this knowledge is now commonly accepted and discoverable on the internet. And efficient markets is blatantly false prima facie, which makes the argument against them rather obvious and dull! Shiller's contribution to modern finance can scarcely be overstated, but today a book like this can be safely skipped.

A must for ayone who invests

Critical to not only read but also to digest the main thoughts based on the most diligent and thought through research one sees in finance. The fact that the bubbles will come and go, and are an ever lasting feature of human psyche is absolutely critical in managing once expectations and bubbles avoidance for individuals and society. Today, more then ever, is this very relevant as the exhuberance has reached new heights and only recently begun to crack. The facts that equty underpeformed bonds for many long periods of time and that ŕeaĺ estate has generally been and underperformer over very long time, are also valuable for today. Such period may be comming, that bonds, after interest rates peak, will be the best investment for next decades (if equity does not crash very deeply ..i.e. addiontal 50%). JP

Irrational Exuberance is an intensive book that is easy to follow along. There is a lot of information relating to the psychology of the markets during the booms and busts. Great information to have for the near and distant future.

I’m exited about this book, but did not get further than the publishers note stating that figures are referred to, but only published in the printed and e-book version (not included as a PDF or web link). A finance book like this is of course not complete without figures.

Efficient market theory my a**

Loved this book. After reading one cannot go about looking at stock markets in the same way. If one is not convinced that stock markets do not contain intrinsic value and it's valuations are simply the product of irrational people's buying and selling decisions without any underlying logic then one will be after finishing this book.
I actually got in a fight with an McKinsey Banking Consultant who disagreed with me over the ideas in this book. Maybe they should teach it in the economics curriculum.