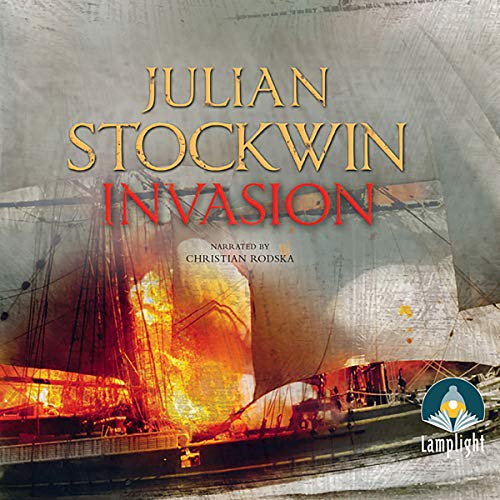 Napoleon's forces are poised to invade Britain, and Commander Thomas Kydd's ship is at the forefront of the fleet defending the English coast. His honour restored after temporary disgrace in the Channel Islands, and reunited with his ship Teazer, Kydd seizes the chance to fight for his country. Then Kydd is abruptly withdrawn from the fleet and sent back to Dover on a secret mission to guard a mysterious American inventor. Having worked his way up from press-ganged seaman to captain of his own ship, Kydd is furious to find he will miss his opportunity to prove himself in battle. Yet Kydd's role in the approaching war may be the most crucial part he has ever played.

A story with a different twist. Kydd ends up running protection for an inventor, who could win the war for Britain. Very little excitement in this one, but still interesting. Rodska does his usually great job.

Like the previous book by the same author I enjoyed it greatly
and I find the listening to the Narrator of these audio books
very good.

Although the repetition of Kydd and Renzie's inner thoughts is prominent throughout all of the previous Kydd books, it seems to be increasing with every new installment. In Invasion, I felt bludgeoned with K&R's endless inner turmoil over the morality and ethics of the future of Naval warfare. I think that Stockwin's writing about espionage usually adolescent, but the scenarios in this book were beyond belief. The dialog with the inventor and the passing mention of Jane Eyre as a niece who 'liked to scribble, too' were cringe-worthy. I almost stopped listening to the series, but I decided to give Book 11, Victory a chance. Plot-wise, you will not miss anything if you skip this book.

A little slow in the last few chapters

Great addition to the storyline. Wanted a little more swashbuckling vs intrigue but understand the need to mix it up. Overall another home run in the series!

I have listened to three of Stockwin’s earlier books and found them very good, this was not at all good. Does this indicate a generally downward trajectory?

Very well performed. An interesting series that follows Captain Kydd’s rise in the Royal Navy. Overall worth the time and money. Continues to hold my interest.

What made the experience of listening to Invasion the most enjoyable?

The subplot about Renzi being coerced into spying again. The trip to Paris and the quick thinking he does on his feet. Renzi is becoming more interesting than Kydd.

What other book might you compare Invasion to and why?

He's really great to listen to during battle action. However, his American accents are a bit painful.

Who was the most memorable character of Invasion and why?

Renzi, having to face his demons about the world of subterfuge.

Kydd is a Winner

Invasion is #10 in the series and I have enjoyed listening to all the previous installments.