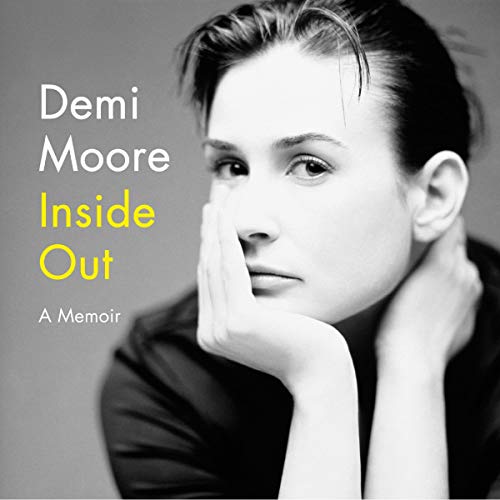 For decades, Demi Moore has been synonymous with celebrity. From iconic film roles to high-profile relationships, Moore has never been far from the spotlight - or the headlines.

Even as Demi was becoming the highest paid actress in Hollywood, however, she was always outrunning her past, just one step ahead of the doubts and insecurities that defined her childhood.

Throughout her rise to fame and during some of the most pivotal moments of her life, Demi battled addiction, body image issues, and childhood trauma that would follow her for years - all while juggling a skyrocketing career and at times negative public perception.

As her success grew, Demi found herself questioning if she belonged in Hollywood, if she was a good mother, a good actress - and, always, if she was simply good enough.

As much as her story is about adversity, it is also about tremendous resilience. In this deeply candid and reflective memoir, Demi pulls back the curtain and opens up about her career and personal life - laying bare her tumultuous relationship with her mother, her marriages, her struggles balancing stardom with raising a family, and her journey toward openheartedness.

Inside Out is a story of survival, success, and surrender - a wrenchingly honest portrayal of one woman’s at once ordinary and iconic life.

I loved listening to Demi, in her own words, she has that gorgeous husky voice. We all go through similar experiences of love, loss and grief and personal expansion. I’m going through my own heart break right now and also have my demons. Found her story real and uplifting and an easy listen.

This was my first audio book. It was lovely to feel like Demi was telling me her story, in her own words. I felt her emotions and enjoyed her insight and life lessons, which I’m sure everyone can in some way connect to themselves. I recommend this book to everyone. I enjoyed every minute.

Thank you Demi for letting us in. This is so brave and open that I am in awe. Sharing your story help is to relate and to be open with our lives. Together we are all stronger by sharing our pain and moments of shame and grieve.

Love Demi Moore always been a massive fan of her work. I really enjoyed her book about the real person she is it must have took a lot for her to completely tear down her walls to reveal to us her life but I understand she had to do this to be able to move on she is a real inspiration to everyone. Especially women. Thank you Demi

Demi's memoir - as strong & stunning as she is

An absolutely beautiful memoir of Demi's life. It's hard to imagine that a woman of such stature, beauty, talent and grace has the harrowing, heart wrenching story that she does. Demi shares the pain and vulnerability of her life so honestly and so openly. Never playing the victim but rather owning every decision.

Most wouldn't have the guts to look so deep and get so honest, with themselves and for the whole world to share. But she does. And she does it so beautifully!

Fascinating story of a strong girl who grew up to an even stronger woman with all the obstacles in her way using them as a challenge to grow. Self reflected, honest but always very gentle to everybody involved. Demi tells her story which means for a long time telling the story if somebody else. Her family and colleagues. When she looses all this she gets to herself and wins it back by caring for herself.
Isn’t that a little bit the story of all successful woman (means professionally or in private life), especially when there a little role models to follow. Thanks for sharing your story. It also helped me along to my inner me.