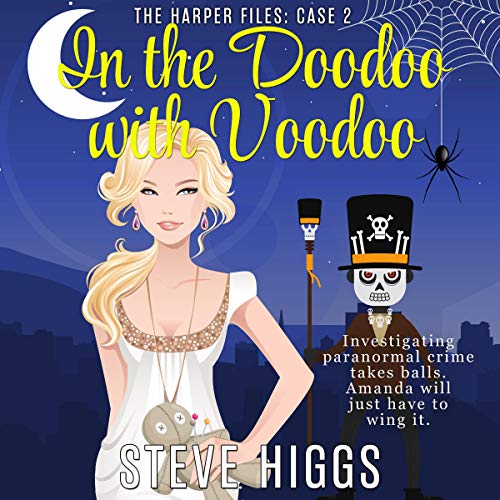 In the Doodoo with Voodoo. A Cozy Mystery

Paranormal investigation takes balls. Amanda will just have to wing it then.

What was she thinking? Quitting her steady job for the police for an uncertain future at a paranormal investigation agency? No time to dwell on it though, as she has a new client with a surprising problem: Kimberly Kousins has been cursed by a voodoo priest.

Determined to prove to herself, her former chief inspector (whom she loathes), and everyone else that she is a capable woman with no need for a man to rescue her, she is going to have to bend the day to her will.

But voodoo nonsense isn’t the only thing distracting her. After several dates with hot, athletic, super-rich Brett Barker, they still haven’t made it into bed. Is that normal? Is he waiting for her to make the first move? Her new boss has inexplicably taken the week off without warning, leaving her to run the business, and his best friend, the handsome, muscular six-foot-seven-inch Benjamin Winters, AKA Big Ben, is being very clear about what he wants to do with her.

You can be certain that nothing will go as planned in this mayhem-filled, madcap cozy mystery.

In the Doodoo with Voodoo. A Cozy Mystery

It's Amanda's last day on the job for the police and she's still in awe that she's giving up her safe routine position in the police force for working with Tempest Michaels Paranormal Investigative Services. The first case she takes deals with a young woman who feels she's cursed by voodoo. Now she must follow the clues and find the culprit to save a young woman. Alongside that she has to make amends to Tempest for the police force using him as bait in a case involving clowns as well as dealing with her beau from a previous case.
Jess Meadows brings Amanda and her friends to live and her voice soothes as well as weave a spell over you as you listen.
Fantastic audio and story!!

This one was great!

*Does need a trigger warning*.

Narrator was much better than the one who did books 1-4, rhythm and emphasis very good, however she did have an odd thing where she occasionally did the thick-tongue baby voice. Not sure why she did that, and only on and off.

Laugh your sox off!

Do NOT have a hot beverage nearby when reading this book! The characters are exceptional and many of the situations are just too funny for words. Which is one reason why I will not attempt a recap, and no spoilers here. You wouldn't believe either, anyhow!

Amanda Harper is a super character. Her sidekick Patience is reminiscent of a Janet Evanovich character & is great comic relief. Higgs writes well & the plot moves along crisply.