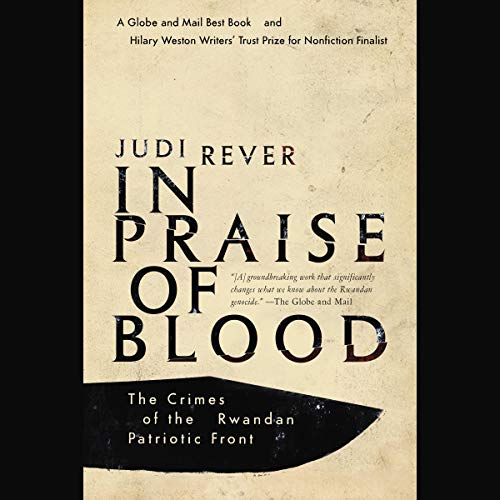 In Praise of Blood

In Praise of Blood

A stunning work of investigative reporting by a Canadian journalist who has risked her own life to bring us a deeply disturbing history of the Rwandan genocide that takes the true measure of Rwandan head of state Paul Kagame.

Through unparalleled interviews with RPF defectors, former soldiers, and atrocity survivors, supported by documents leaked from a UN court, Judi Rever brings us the complete history of the Rwandan genocide. Considered by the international community to be the saviors who ended the Hutu slaughter of innocent Tutsis, Kagame and his rebel forces were also killing, in quiet and in the dark, as ruthlessly as the Hutu genocidaire were killing in daylight. The reason why the larger world community hasn't recognized this truth? Kagame and his top commanders effectively covered their tracks and, post-genocide, rallied world guilt and played the heroes in order to attract funds to rebuild Rwanda and to maintain and extend the Tutsi sphere of influence in the region.

Judi Rever, who has followed the story since 1997, has marshaled irrefutable evidence to show that Kagame's own troops shot down the presidential plane on April 6, 1994 - the act that put the match to the genocidal flame. She proves, without a shadow of doubt, that as Kagame and his forces slowly advanced on the capital of Kigali, they were ethnically cleansing the country of Hutu men, women, and children in order that returning Tutsi settlers, displaced since the early '60s, would have homes and land.

This audiobook is heartbreaking, chilling, and necessary.

“Rever chronicles the largely unreported and cynically discounted view of the Rwandan genocide. A dogged reporter and skillful writer, Rever eschews what she calls the ‘Hollywood version of good guys and bad guys’ to meticulously document a chapter in recent history that is as complicated as it is dismaying. In making her case, she risks everything - her life included - to expose the crimes of Rwanda’s current brutal government. Rever’s harrowing narrative isn’t just a portrait of a tragic time; it also stands as an uncompromising prosecution of that period and its ongoing consequences. In Praise of Blood is an undeniably important story told by a remarkably brave writer.” (2018 Hilary Weston Writers’ Trust Prize for Nonfiction Jury)

“Groundbreaking work that significantly changes what we know about the Rwandan genocide.” (The Globe and Mail)

“In Praise of Blood explores how Washington helped obscure the full story of the genocide that devastated Rwanda during the 1990s and cover up the crimes of the Rwandan Patriotic Front (RPF), which has ruled the country ever since. Over the years, less valiant portraits of Kagame and the RPF have appeared.... In Praise of Blood is the most accessible and up-to-date of these studies.... Kagame’s regime and its defenders have dismissed them all as propaganda.... Rever’s account will prove difficult to challenge. She has been writing about Central Africa for more than twenty years, and her book draws on the reports of UN experts and human rights investigators, leaked documents from the International Criminal Tribunal for Rwanda, and hundreds of interviews with eyewitnesses, including victims, RPF defectors, priests, aid workers, and officials from the UN and Western governments. Her sources are too numerous and their observations too consistent for her findings to be a fabrication.” (Helen Epstein, The New York Review of Books)

It is amazing to hear a different prospective!

A great book. It is amazing the research and risk the author took into making this book. The book presents a different side to the war that the majority of people are unaware of. Thank you Judi for caring enough about the Rwandan conflict to present us with this gem in 2018! It is up to the reader to take the information presented in this book as fact or false. Nonetheless, this is a book that makes you understand that the Rwandan conflict is more complex than what the main media leads us to believe!