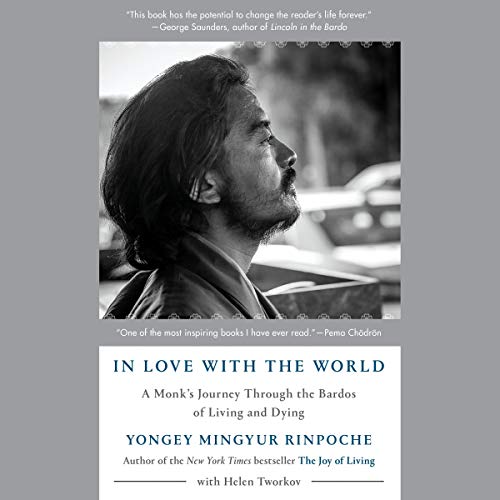 In Love with the World

In Love with the World

A rare, intimate account of a world-renowned Buddhist monk’s near-death experience and the life-changing wisdom he gained from it

“One of the most inspiring books I have ever read.” (Pema Chödrön, author of When Things Fall Apart)

“This book has the potential to change the reader’s life forever.” (George Saunders, author of Lincoln in the Bardo)

At 36 years old, Yongey Mingyur Rinpoche was a rising star within his generation of Tibetan masters and the respected abbot of three monasteries. Then one night, telling no one, he slipped out of his monastery in India with the intention of spending the next four years on a wandering retreat, following the ancient practice of holy mendicants. His goal was to throw off his titles and roles in order to explore the deepest aspects of his being.

He immediately discovered that a lifetime of Buddhist education and practice had not prepared him to deal with dirty fellow travelers or the screeching of a railway car. He found he was too attached to his identity as a monk to remove his robes right away or to sleep on the Varanasi station floor, and instead paid for a bed in a cheap hostel. But when he ran out of money, he began his life as an itinerant beggar in earnest. Soon he became deathly ill from food poisoning - and his journey took a startling turn. His meditation practice had prepared him to face death, and now he had the opportunity to test the strength of his training.

In this powerful and unusually candid account of the inner life of a Buddhist master, Yongey Mingyur Rinpoche offers us the invaluable lessons he learned from his near-death experience. By sharing with listeners the meditation practices that sustain him, he shows us how we can transform our fear of dying into joyful living.

Praise for In Love with the World:

“Vivid, compelling... This book is a rarity in spiritual literature: Reading the intimate story of this wise and devoted Buddhist monk directly infuses our own transformational journey with fresh meaning, luminosity, and life.” (Tara Brach, author of Radical Acceptance and True Refuge)

“In Love with the World is a magnificent story - moving and inspiring, profound and utterly human. It will certainly be a dharma classic.” (Jack Kornfield, author of A Path with Heart)

“This book makes me think enlightenment is possible.” (Russell Brand)

“This slim book moved me and left me with a better appreciation of Tibetan Buddhism than so many weightier tomes I’ve struggled to understand.” (Barbara Demick, author of Nothing to Envy)

“More than just a mesmerizing read... As Rinpoche narrates his spiritual journey, he lays bare his early hopes and aspirations, his doubts, indignities, bodily and emotional suffering, and vulnerabilities. He offers these with great skill, clarity, and love to encourage and inspire us to travel our own spiritual journeys.” (Sharon Salzberg, author of Lovingkindness and Real Love)

“Part thriller, part deeply personal autobiography, and part Buddhist teachings on how to live a meaningful life, this is an extraordinary book. It has something profoundly important to teach each of us.” (Richard J. Davidson, author of The Emotional Life of Your Brain)

This is the third book I have read by this author. Although I would highly recommend all of them, from the reader's point of view, this may be the best. I enjoyed it so much that I made it a point to seek out a chance to meet the author on his teaching tour explaining aspects of his retreat experience which is shared in the book's pages. Interwoven with this story (of his life and near-death experience as a voluntarily homeless person) is a typically direct and clear explanation of spiritual principles. If you're thinking about getting the book, stop thinking, and buy it. And, by the way, the Audible presentation is also superb.

I was really, REALLY looking forward to this story of Mingyur Rinpoche's four (plus)-year walking retreat, but this book only includes about the first month of the retreat. My rating of the book would have been higher had I known that the book focused on his near-death experience within a few weeks of starting the retreat, and what preceded this life-changing event. While this was very enlightening, I was expecting and wanting a review of the entire retreat, as hinted at in the book's description. Now I want to hear about the remainder of his retreat!

Loved the story and teacher but the narrator was horrible. It/he sounded like a computer and the monotone voice was distracting. I hope they will redo this audible with another voice because the story of his dying and becoming is inspiring and moving.

This book is fascinating precisely because the narrative is so very slight. For this Rinpoche, the ‘story’ is all about how his training manifests when he heads out into the world. The narrator is very disappointing. Couldn’t someone have told him how to say Tibetan, Sanskrit or Hindu words? Very hard to listen to al times.

Brought me to tears many times. This is a book every practitioner should read. What a journey home.....

A story for teaching doctrine...

Being a long time practitioner of secular Theravada Buddhism, I was intrigued with the story (which, by the way, contained only about a week’s worth, or so, of his journey) and I certainly heard a few gems, but I’m not such a fan of all the ritualistic practices, lineage beliefs and other metaphysical aspects that Tibetan Buddhism holds true and the book contained many of those those teachings. However, it was still a worthy listen. But do know that it contains many teachings from the Tibetan Buddhist path, the story Itself was more of a vehicle to teach Tibetan doctrine.

Perfect Just As It Is.

Wonder what happened to the spiritual quests?

The invasion of the West by Buddhism is a fascinating story in itself. Hearing it from a Rinpoche is quite another matter. His near death experience and insights he gained from it are inspirational.

Not a great message

Don't get me wrong: I really like Mingyur Rinpoche, and what he's done for the neuroscientific study of meditation's effects on us. I've also seen videos of him describing meditation, and he's very funny and approachable. I had two problems with this book: 1. The nit-picky problem: The description suggests that this is the story of his adventures while he was gone for three years. It's not. I think it covers about a month or two at the most. Almost immediately, he gets very sick, and it's mostly a story about that illness. Nothing more. 2. The very serious issue: He jumps back and forth between a gradual telling of his experience the first few weeks of his journeys, and the Buddhist topics that come up for him regarding those events. That's great, except that, as he's close to dying, he spends a lot of time thinking about whether he should die or not (as though it was ever up to him to choose), rather than seeking out medical assistance. SPOILERS: He survives (okay, maybe that's not a spoiler, since--had he died--he wouldn't have written the book), but only due to the intervention of a new friend that he made along the way. He then describes this near-death experience as an awakening. And, I rather believe him. But would it not have then been prudent to explain other paths? Say...4 decades of diligent dharma-study and meditation? Instead, his story could be interpreted by some (e.g., younger, at-risk readers) as promoting very risky, near-death experiences as a quick path to awakening. Not a good message AT ALL.

This audio book transports a lot of deep wisdom with ease and is even entertaining. The reader learns a lot already without knowledge of Buddhism's philosophy, but the deepest value will unfold with some educational background. Surely a wonderful book!