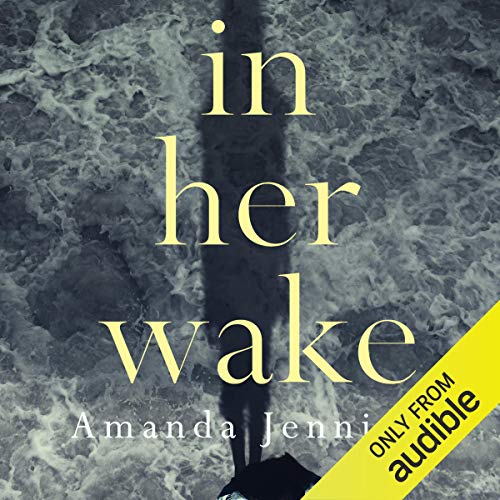 A tragic family event reveals devastating news that rips apart Bella's comfortable existence. Embarking on a personal journey to uncover the truth, she faces a series of traumatic discoveries that take her to the ruggedly beautiful Cornish coast, where hidden truths, past betrayals and a 25-year-old mystery threaten not just her identity but her life.

Chilling, complex and profoundly moving, In Her Wake is a gripping psychological thriller that questions the nature of family - and reminds us that sometimes the most shocking crimes are committed closest to home.

This book was so annoying that, although I tried to get through it, I had to rescue myself from my futile effort to find out what the heck the story was at Chapter Eight. It is too wordy and full of unnecessary descriptives to a fault. It made me feel I was wasting time. On to another book!

Enthralling Story with a Beautiful Narration


Review
Tread carefully dear reader, all is not what it seems!
A slow start, in fact I began to think it might be a tad to "literary" for me, and maybe a bit too intellectual as well. You know, like one of those prize winning books we think we ought to read but never do.
However, don't be fooled.
The writing is so good that before I knew it I was getting mad at one of the characters, you know it has to be good when you are getting mad at a fictional person, so I would advise you to stick with it, it is so worth it.

At times I didn't much like Bella, it was in the way she behaved towards the family that she so desperately wanted to know. She seemed to have no understanding of human needs nor did she seem able to recognise the feelings of others.

Yet how could she?

She had a cloistered childhood, raised as she was under the smothering wings of an abnormally protective mother and a complicit father. She was home schooled and so never mixed with other children. Her husband David isolated and manipulated her. Bella had never had the chance to acquire social skills.

It happened when Bella and her husband were at her childhood home to attend her mothers funeral. Henry, her father, had a long held secret to tell Bella but he simply could not bear to speak the words, and so he informed her in the most horrific of ways.
With nobody left but David, Bella takes the secret and runs, she tells David nothing, he doesn't know the secret nor does he know her destination.
The secret has led her to Cornwall where she seeks out and finds the Tremaynes, Dawn and her sick and totally dependant mother Alice, they live in humble conditions and in not so genteel poverty. Dawn accepts no help and is her mothers full time carer.
Dawn has her own secrets and though she knows who Bella is, she is not willing to allow her to impose upon them. Bella is not welcome.

There is one particular chapter that stays in my head; Dawn has a strong reaction to Bellas behaviour and the way the author conveys those feelings is masterful, each well chosen word conveys Dawns thoughts and feelings so perfectly.

For me, it is was when Bella reached Cornwall that the real story began, the secret had been revealed, or had it?
There is so much more to be discovered....

I loved reading about Cornwall, I was born and raised there and was delighted to hear some of the old expressions included. It was good to hear mentions of the Cornish Language, especially of the attempts of coffee shop owner from "up country" to learn it which added a few light hearted moments to the story.
And, of course, to be reminded of the legend of Morveren, the maid from the sea "the Mermaid of Zennor"

Narrator
Kate Rawson captures the beautiful musical lilt and cadence of the West Cornwall accent perfectly. It's rare to hear an actor produce such a good Cornish accent and I marvelled at her authenticity, then I discovered she spent the first years of her life in Cornwall!
Kate gives each character, male and female, a distinct and easily identifiable voice making it easy for the listener to follow the story.
Her sensitive and skilled interpretation of the authors beautiful writing immerses the listener in the story adding an extra dimension of pleasure to the experience.

This audiobook is my own copy.

I Finally Know Who I Am

No, I think in this case the written version would be better.

What other book might you compare In Her Wake to and why?

Yes, her accent with Dawn was driving me crazy, and she made her sound so dim- witted.

When she found out the WHOLE story!!!!

Good book, but I wouldn't listen to it again.