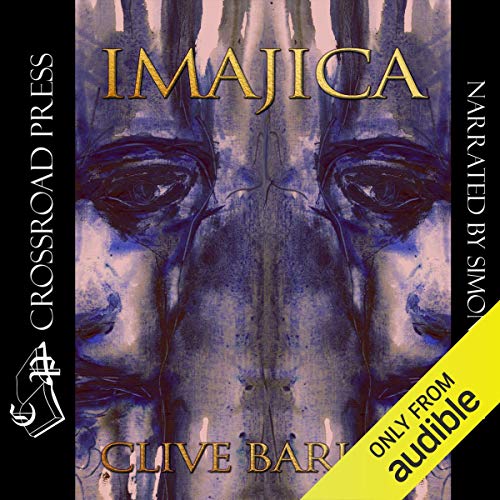 Imajica is an epic beyond compare: vast in conception, obsessively detailed in execution, and apocalyptic in its resolution. At its heart lies the sensualist and master art forger Gentle, whose life unravels when he encounters Judith Odell, whose power to influence the destinies of men is vaster than she knows, and Pie "oh" pah, an alien assassin who comes from a hidden dimension.

That dimension is one of five in the great system called Imajica. They are worlds that are utterly unlike our own but are ruled, peopled, and haunted by species whose lives are intricately connected with ours. As Gentle, Judith, and Pie "oh" pah travel the Imajica, they uncover a trail of crimes and intimate betrayals, leading them to a revelation so startling that it changes reality forever.

It was daunting at first, being over 37 hours of listening, but I quickly became immersed in the world and the lore. The tale is an epic - sans the poetical layout, the stars of the tale complex and yet well described, and the whole of the story comes full circle for an ending that coaxes out the good tears. The narrator was as wonderful; using as many diverse accents and tones as the narrative possessed. Before I was 15 hours in, I had already insisted that all of my friends read this, as I will now suggest to anyone who happens upon this review.

After having read this book several times over, I nevertheless discovered new intricacies, finally hearing every word rather then scanning every line.

The epic story is difficult to summarize and that is not what I want to impart. Instead I want to praise the highly imaginative storyline that is enveloped in such beautiful details that it is not difficult for the reader to see all the new alien worlds, or dimensions clearly.

One of my favorite fantasy/magic stories since I first read it about 25 years ago!

Too much sex not enough story

I just couldn't finish this book, too much vulgarity and it was boring and slow. only made it about 13 hours in and there were already 3 or 4 detailed sex scenes. Not my cup of tea.

This sweeping novel takes the reader on a fantastical ride through dimensions and the lives of intriguingly genuine characters.

I listened to the audio-book and although getting through the book was an arduous task because of the length, the narrator did an excellent job conveying the characters, inflections, and keeping the story flowing.

I would recommend reading a physical copy just for the ease of referencing a previous chapter, reflecting and so on.

I did get distracted by the scope of this novel at times.

Barker hit his high water mark with this text. In Imajica, you have a novel who's text and world and characters all create a circular telling of myth in imagery. If you give yourself over to the journey, you will be shown wonders and horrors and wonders again. As in all of Barker's fiction, the author doesn't shy away from the grotesque or the profane, but instead stands them right up next to the sacred and divine. He makes them part of the circle and hands it to the reader in a koan of an experience. Simon Vance does an excellent job of carrying the voices of the text. For the first time, Crossroad gives us an unabridged full telling of the tale. However, I will offer a word of warning. If you're looking for simple horror, look elsewhere. This is not a tale of monsters, though it contains them. It's a love story for imagination.

Better Than I Remembered

I read this book about 20 years ago and loved it. I was hoping it would hold up and it did. Clive Barker has always been one of my favorite writers and Imajica could possibly be his best work. It's description of the fantastic is so floral and vibrant. I really fell for the characters all over again and his deft ability to describe the differences between men and women is subtle and nuanced. There's fantasy, horror, love and adventure here mixed with magic and religion- I love this book and Simon Vance's narration was excellent.

First it's a fantasy. Second it's a masterpiece

Great journey! Unbelievable that he tied all of the ideas and worlds together. Absolutely remarkable! He had to have story boards, spreadsheets, flow charts and graphs sprawled all over his office to keep the many ideas and story lines consistent, which he did with great mastery! If I could talk to Mr. Barker in person, I would tell him I understand the magnitude of this project and I am in awe.

An epic adventure. The narrator did an excellent job reading the story. I felt as if I was in the story along with all the characters. Did not want to stop listening.

Not just a book but a ticket to another world

Some books are more than the sum of the words that create them, its the dimension created without words that set your imagination soaring beyond those limits and leave you feeling bereft when it is done. The characters can be slightly predictable but the substance of the worlds and tale could not leave room for much more complexity or you'd be wandering the Imagica for the rest of time...

Author Clive Barker has this talent for writing and creating a story that will absolutely blow your mind. He has created worlds, characters that will blow your mind, adventure, philosophy, and intrigue from start to finish. It took me quite awhile to get through this story but I'm thrilled I did, after all it is a Clive Barker story. I think it was over 37 hours long but I could be off by an hour or two. The story was filled with plot twists and the majority of the characters are far from what you think.

Simon Vance did an outstanding job with bringing this story to life. He breathed life into it from start to finish. I was amazed at his vocalization and his ease for distinguishing accents and voices of each character. He did a great job! Overall, a perfect 5 🌟 rating. I received this audio from the author/narrator in exchange for an unbiased review through Audiobook Blast.