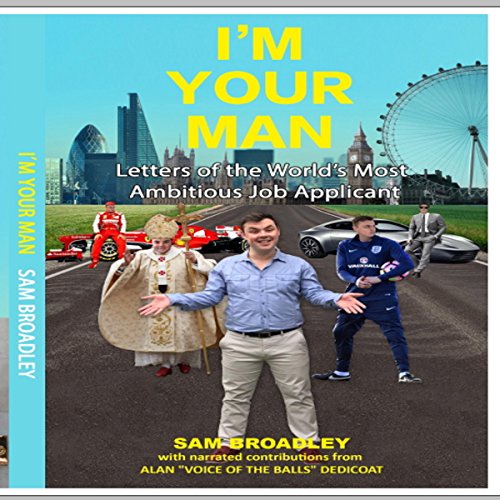 I'm Your Man: Letters of the World's Most Ambitious Job Applicant

Have you ever wanted to be pope? Or prime minister? Or galactic pilot? Only a very select few go on to achieve such grandeur in life and assert massive influence in the world. Sam Broadley is not one of those people. But he thinks he is. Or that he will be. That he certainly deserves to be.

As a young man, having failed in his pursuit of sporting stardom, Sam became bored of normal employment very quickly. Having already applied for England Manager aged 19, he knew he had more to offer the world than life in the dreary, mind-numbing call center he later found himself in.

And so he applied to be pope. He was unsuccessful.

What came next was a quest for workplace magnificence. Undeterred by his Vatican-based setback, it became a mission to bag a job of extreme magnitude. Unwilling to take conventional routes to the top, the postbox was hit with application letters for some of the most prestigious roles imaginable.

His steadfast belief was that he was ready to take on the world - and it didn't matter if that was as prime minister, president of the EU, or James Bond. All he knew was that the world needed him. He was born to inspire.

So listen to this audiobook and hear his letters. You will claim the man is delusional, no doubt, but he might, just might, inspire you to dare to dream big. But he probably won't.

The application letters are read by the applicant, and the replies by Alan "Voice of the Balls" Dedicoat.